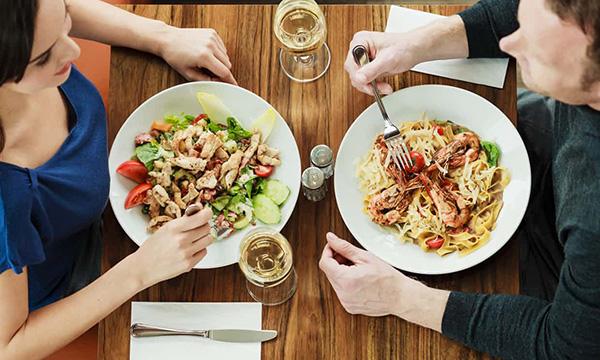 Study suggests link between eating slowly and lower waist circumference and BMI, though some experts are sceptical

While you might be tempted to wolf down a sandwich or gobble up your dinner, researchers say there may be advantages to taking your time over a meal.

According to a study looking at type 2 diabetics, eating slowly could help prevent obesity, with researchers finding a link to both lower waist circumference and body mass index (BMI).

“Interventions aimed at altering eating habits, such as education initiatives and programmes to reduce eating speed, may be useful in preventing obesity and reducing the risk of non-communicable diseases,” the authors write.

The latest study is not the first to suggest that taking a sedate pace at the dinner table could be beneficial: various pieces of work have hinted that those who eat quickly are more likely to be overweight, have acid reflux and have metabolic syndrome.

The latest study, published in the journal BMJ Open by researchers in Japan, looked at data collected though health checkups and claims from more than 59,700 individuals as part of health insurance plans, with data spanning from 2008 to mid-2013.

Further analysis found that slower eating speed, no sleep loss, not skipping breakfast regularly and not regularly eating dinner just before bed were all associated with a lower chance of obesity.

With almost a third of participants having had two checkups, just over 20% having three, and more than 13% having four or more, the team were also able to look at the impact of changing habits. The results reveal that those who switched to eating more slowly between health checks, not snacking after dinner or eating dinner just before going to bed all showed signs of a reduction in their BMI. However, it is not clear what caused the changes. Changing breakfast habits, using antidiabetic mediation and stopping regular smoking were not linked to any changes in BMI.

The study’s limitations included that it only focused on participants with type 2 diabetes, had few older participants, and did not take into account levels of physical exercise or the amount of food eaten daily. Moreover it relied on self-report, a subjective notion of what fast, slow or normal eating pace is and looked mainly at health-conscious individuals.

Ian MacDonald, professor of metabolic physiology at the University of Nottingham, expressed doubt about the findings, pointing out that few people changed eating speed during the study, and that it was not clear that such changes were behind a change to BMI.

“It is certainly not appropriate to extrapolate from these observations to conclude about eating speed and the development of obesity – however attractive the idea that fast eaters are likely to eat more, and that eating more leads to weight gain,” he said.

However Tam Fry, chairman of the National Obesity Forum, said: “The speed at which a lot of people wolf down their food is undeniably a contributor to obesity. It takes fast eaters longer to feel full simply because they don’t allow time for the gut hormones to tell the brain to stop eating. Eating quickly also causes bigger blood sugar fluctuations which can lead to insulin resistance.

“In particular, workers who snatch their lunch at the desk are doing their health no favours. They should stop what they’re doing, switch off their phones and emails and preferably take a half hour away from the office altogether.”