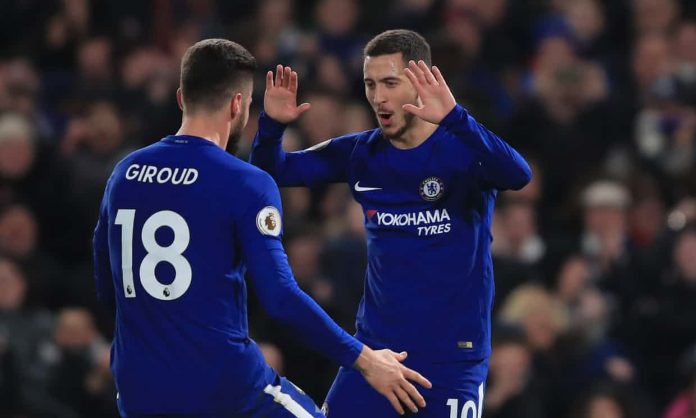 It was only when the third goal bulged West Brom’s net as this contest drifted into its final quarter, with Eden Hazard punching the air in celebration, that Chelsea could truly relax and bask in a restorative victory.

The Belgian had darted across the edge of the area away from a floundering Jonny Evans before ripping a shot inside Ben Foster’s near post. It was the kind of emphatic finish to breathe belief back into the ranks of the doubters.

Hazard would suggest post-match that Thierry Henry’s input with the Belgium national squad has encouraged that kind of snapshot, fired off before Foster could adjust his feet in anticipation of it. In truth neither centre-half nor goalkeeper could match Hazard’s speed of thought or mastery of execution and that was what in effect set the champions apart. The visitors competed ruggedly enough, recovering from the loss of Daniel Sturridge inside the opening few minutes to test local nerves, but were unpicked and undone by those dashes of quality. Their predicament is troubling. Chelsea, in contrast, are fourth, three points off second.

How they needed an occasion like this, when luck was with them and ruthlessness restored to their approach. Those desperate displays and hefty defeats by Bournemouth and Watford shocked this squad to its core. Had Jay Rodriguez, early on, not snatched at his shot in front of goal, dragging the effort wide after Victor Moses nervously headed a loose ball into his path, then all those anxieties might have flooded back. The same might have applied had Salomón Rondón’s booming header not flown wide or, when Chelsea’s lead was still narrow, had Thibaut Courtois not instinctively denied the Venezuelan after he had bullied Andreas Christensen off the ball early in the second half.

Evans, rising at the resulting corner, guided a free header high and wide. Had one of those chances gone in, then Albion, even as a team who have forgotten how to win, might yet have piggybacked on Chelsea’s anxieties to prosper. “I know what this place is like; it can turn,” said Alan Pardew.

Yet, with each opportunity missed by the visitors, Chelsea were roused further out of their lethargy with Hazard and Olivier Giroud steadily finding their feet. That partnership already looks promising, for all that the Frenchman ended only his second Premier League start of the season with his head bandaged courtesy of Ahmed Hegazi’s boot and bruised on his calf after Evans’ foul.

It was his subtle touch, holding off the Egyptian centre-half, from Hazard’s fizzed pass that helped squeeze out the lead. The playmaker, such a livewire, darted at pace away from Gareth Barry and planted his shot into the corner with a flourish before any visiting player could react. That rather summed it all up. He was operating on a different plain, thriving on Giroud’s Arsenal-esque touches. “He is a great target man, maybe one of the best in England,” said Hazard. “He is a good point of reference.”

That was missing in those two recent defeats, where Chelsea’s front-line lacked presence and power, and Hazard was forced to scurry from the centre in search of the ball in areas opponents could contain his threat. Here he could revel in that free role confident that first Giroud and then Álvaro Morata, recovered from a back injury to emerge off the bench for the final half-hour after a month-long absence, would lead the line. Pedro’s selfless running, dragging markers out of position, and Cesc Fàbregas’s probing from the centre were just as significant. It was the latter’s prod into the box that Craig Dawson deflected into Victor Moses’ path, with the wing-back duly converting the second.

Each setback had Pardew cursing on the sidelines. Albion must be one of the great mysteries of this season, a squad who, on paper, look to have enough quality to be mid-table but who, instead, have now won once in 25 league games. They are seven points adrift of safety and even five from 19th.

They depart for Barcelona and some warm- weather training on Tuesday, though even now their prospects of revival seem to hinge on the results of a scan on Sturridge’s hamstring. His first sprint towards the corner, inside the opening two minutes, was enough to leave him wincing in pain and signalling for a replacement.

His history of injuries is well known – the strains, pulls and tears have cost him 120 senior games already in his career – but Pardew had been praying his loan arrival from Liverpool would add much needed bite. It is true to their dismal luck that, already, Sturridge has gravitated towards a new treatment room, with his new team anchored to the foot of the table.