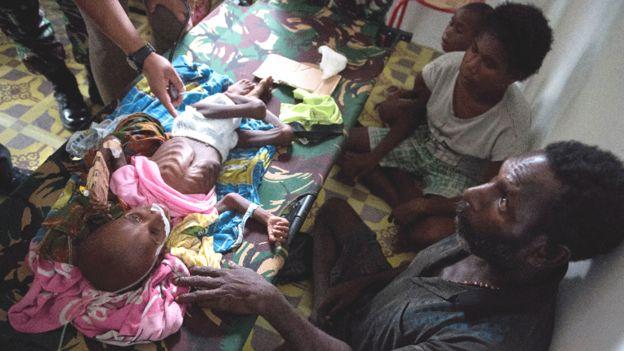 A measles and malnutrition crisis has killed at least 72 people, mostly children, in Indonesia’s remote province of Papua, home to the world’s biggest gold mine.

As Rebecca Henschke and Hedyer Affan report, the crisis has put the spotlight on a region closed off to journalists for decades and revealed serious government failings.

Just two months old, Yulita Atap’s life has already been brutally hard. Her mother died in childbirth. Her father gave her up for dead.

“In the cloud of grief he wanted to hit her, to bury her with her mother,” says her uncle, Ruben Atap.

“I said, don’t do that, God will be angry, he became calm and was grateful that we wanted to take care of her, but we are now struggling to keep her alive.”

She lies limply on a bed in the only hospital in the Asmat regency, a jungle-covered area the size of Belgium. Her ribs exposed, nearly piercing through her skin, her stomach bloated, she floats in and out of sleep.

Her uncle stares constantly at her tiny body.

Government health workers helped him make a two-day journey on a speedboat up a river to get here. The rivers are the highways, weaving like snakes through the thick jungle.

On the next hospital bed is Ofnea Yohanna’s family. Three of her children, aged four, three and two, are severely malnourished.

She married when she was just 12 years old. Still in her twenties, she has six children.

“We eat when there is food, when there isn’t we don’t. We don’t have a boat at the moment to go fishing in,” she says.

While we talk her daughter stares emptily off into the distance, her eyes hollow and lifeless. She picks at a packet of sweet biscuits, a pile of plain white rice on brown paper sits uneaten next to her.

Traditionally, the Asmat tribe has lived on sago starch extracted from palms, and fish from the rivers and sea.

“Asmat is, in its way, a perfect place. Everything you could possibly need is here,” wrote Carl Hoffman in his 2014 book about the disappearance and presumed death of New York socialite, Michael Rockefeller, in Asmat in the 1960s.

“It’s teeming with shrimp and crabs and fish and clams and sago palm, whose pith can be pounded into a white starch and which hosts the larvae of the Capricorn beetle, both key sources of nutrition,” he wrote.

Michael Rockefeller, the child of a New York governor and from one of America’s richest families, came across the world to Asmat to collect the tribe’s elaborate and impressive art that includes stylised giant wood carvings.

The art of the Asmat people is found in top museums across the world and is prized by collectors.

Rockefeller’s black and white photos from his journey to visit the Asmat people, at the time cannibals and head-hunters, amazed the Western world.

The semi-nomadic Asmat tribes used to spend months in the forest to make sago and find enough food to live.

Cultural changes began happening in the 1950s with the arrival of Christian missionaries, and in recent years diets have dramatically changed with increasing number of migrants from other Indonesian islands coming here.

The nearest city of Timika, an hour’s flight away, serves as a centre for the US-owned Freeport mine, the world’s largest gold mine.

Timika has one of the fastest population growths in Indonesia.

“People increasingly buy imported food and because in some places the forests have been logged they have to go further to get sago,” says local health researcher, Willem Bobi.

“So now the quickest thing is to buy instant processed food; government money has come in and made our people dependent.”

A native Papuan, Willem Bobi travelled across the vast jungle-covered area and described the dire health situation in a book, The Asmat Medicine Man, which was published last year.

“I knew a crisis like this would come. I saw there was a lack of clean water and a serious lack of health facilitates. I saw health clinics where the only doctors had been on leave for months but were still being paid wages.

“The crisis we are seeing now has happened many times before but it has never been as bad as now,” he says.

“It’s happening because the health authorities have not dealt with this seriously enough.”

Health workers and paramedics vaccinated more than 17,300 children, and authorities now say the measles outbreak is under control.

The military says it is now running a year-old monitoring operation in the area to find out where problems are.

However, the head of the military medical teams acknowledged that Jakarta’s response was slow.

Papua has been a sensitive region since it became part of Indonesia in the 1960s following what some historians allege was a flawed UN-supervised vote.

Just 1,063 people were selected to vote. The province is incredibly resource rich, home to the world’s biggest gold mine, which is one of Indonesia’s largest taxpayers.

The government says Papua is an integral part of Indonesia and that this has been recognised by the United Nations. But a low-level separatist movement, fighting for independence, continues to this day.

The military has been accused by rights groups of gross human rights abuses in its attempts to suppress any dissent.

Until recently foreign journalists were not allowed to report here. I had to get special permission from the police to travel here.

There was unrest while we visited; a women was shot dead. Police said she was among villagers who tried to help a man escape arrest.

He was accused of selling ore concentrate, which he had allegedly taken from the cargo dock of US mining company Freeport-McMoRan.

The women’s family say she was an innocent bystander. And now police are conducting an internal investigation.

UN High Commissioner for Human Rights Zeid Ra’ad Al Hussein, on a visit last week to Indonesia, said he was concerned “about increasing reports of the excessive use of force by security forces, harassment, arbitrary arrests and detentions in Papua”.

He said the Indonesian government had invited the United Nations to send a mission to the province, something it would do soon.

In an attempt to ease tensions, Papua was granted greater autonomy in 2001, and there has been a significant increase in government funds for the region, with Jakarta vowing to bring prosperity to the people of Papua.

But Ruben Atap, like many Papuans I met, suggests the wave of cash has mainly benefited a select few.

“Our local leaders take the money and use it for themselves. They don’t think of their people and fill their own bellies,” he said.

In wake of the outbreaks, Finance Minister Sri Mulyani Indrawati said that special autonomy funding for the province would be re-evaluated to make sure it was being used for development.

“This is a lesson for us, because throughout this time the special autonomy funds have been disbursed as a block grant to the provincial government – even though special autonomy has specific purposes,” she said last week.

The Regent of Asmat, Elisa Kambu, said the problem had wider issues.

He said people in Jakarta “just talk about money, that lots of money comes to Papua; money alone cannot solve this problem”.

“Asmat is a wake-up call for us all,” said presidential advisor, Yanuar Nugroho.

He said a number of other areas in Papua could face the same health crisis and Asmat was just the tip of the iceberg.

“The problem lies with the local government,” he said.

“Maybe then it will not be easy to get money anymore and people will go back to the old natural ways of finding food,” he says, laughing.

“But of course that’s going to be very hard, because now it’s easier [to] buy instant food.”

A proposal President Widodo to relocate Asmat people scattered throughout the jungle into a town, so they could be close to medical services, was immediately rejected by local leaders.

“Moving people is not as easy as that because we have culture, customs, land rights and connection to the land,” says the regent, Elisa Kambu.

President Widodo has visited Papua more than six times since his election in 2014, working hard to demonstrate Jakarta’s commitment to developing the province, prioritising infrastructure construction.

And in the wake of the crisis the government has vowed to invest more in health facilities across the remote area as well as schools.

Ruben Atap says he hopes one day his tiny niece will go to school.

“What do you hope she will do after that?” I ask.

‘I don’t know what her future will be like, we are just trying our best to help her survive.”