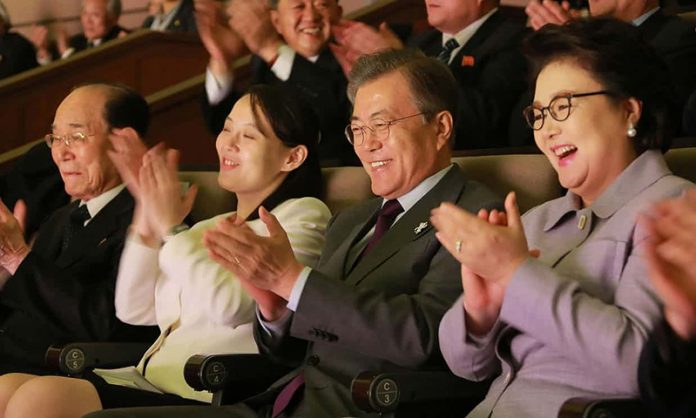 Benjamin Haas in Seoul and agencies

North Korea’s leader, Kim Jong-un, has praised the “warm climate of reconciliation and dialogue” after a delegation returned from their three-day visit to the South for the Winter Olympics.

Kim expressed “satisfaction” over their visit, according to state media, and gave his gratitude for “sincere” and “very impressive” efforts made by Seoul to receive them.

“It is important to continue making good results by further livening up the warm climate of reconciliation and dialogue created by the strong desire and common will of the North and the South with the Winter Olympics as a momentum,” he said.

There was no mention of the offer of a summit made to the South Korean president, Moon Jae-in, via Kim Yo-jong – the North Korean leader’s sister who was part of the delegation. Kim Yo-jong delivered a letter from her brother while she was in Seoul asking Moon to visit “at his earliest convenience”. Moon replied that both Koreas should try to bring about conditions that would make the visit possible.

The omission signals the precarious nature of the offer, with both South Korea and the US demanding Pyongyang consider making concessions on its nuclear programme as a part of any future talks. It is not clear if Washington would support Moon traveling to the North, as the US seeks to further isolate the regime.

Kim Jong-un said Kim Yo-jong also relayed the “movement of the US side” to him, a reference to her brief encounter with US vice president Mike Pence at the Olympics opening ceremony and a signal that relations with Washington remain frosty despite the rapprochement with Seoul.

Talk of an inter-Korean summit, which would be the first since 2007 if it happened, come after months of tension between Pyongyang, Seoul and Washington over North Korea’s nuclear and missile programmes. An exchange of fiery words between Kim Jong-un and the US president Donald Trump, raised tensions on the Korean peninsula.

Seoul said on Monday that it would push ahead with its plans for reunions of family members separated by the 1950-53 Korean war in order to sustain the dialogue prompted by the North Korean delegation’s visit.