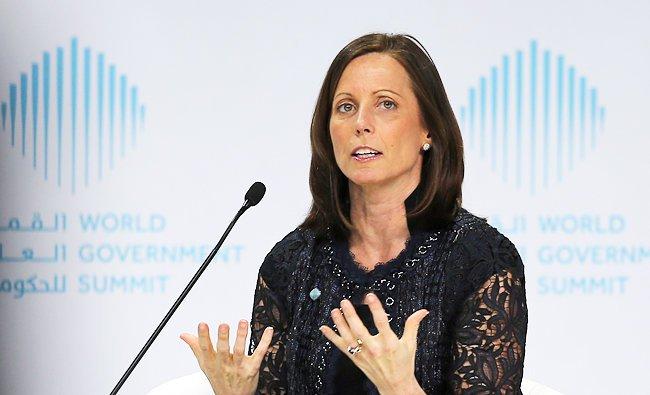 DUBAI: Adena Friedman, president and chief executive of Nasdaq, has left the door of the second New York stock exchange wide open for a listing of Saudi Aramco, the Kingdom’s oil giant aiming for an initial public offering this year.

At the World Government Summit in Dubai, she was asked by Hadley Gamble, CNBC’s Middle East anchor, if Aramco could go for a dual listing on the Riyadh market and Nasdaq and replied: “With any company of that size and liquidity you could support a dual listing and allow fungibility (interchangeability) across markets.”

She insisted she was not referring to any specific company, but went on to say that Nasdaq was home to the four largest companies in the world, and that it had attracted $350 billion-worth of listings from companies moving from the New York Stock Exchange to the newer and smaller Nasdaq.

Her comments will revive Nasdaq’s ambitions to take part in the Aramco listing, which could be worth $100 billion if the Saudi company opts for a foreign listing in addition to a flotation on the Tadawul in Riyadh.

The New York Stock Exchange had been the assumed favorite among the American markets bidding for the IPO, but President Trump last year included Nasdaq in a tweet requesting Aramco go for a New York listing. Nasdaq is the second-largest market in the world by market capitalization, behind NYSE but ahead of London, also vying for the Aramco IPO.

Nasdaq has been a partner of the Riyadh market for 20 years, cooperating on share trading technology and systems. “We’ve been working with them to help provide a fair market place and to help their market expand,” she said.

Friedman said she was impressed by the expansion of regional markets, but added that transparency in markets and companies would aid their growth. Nasdaq is also a partner of the Dubai Financial Market and the Nasdaq Dubai stock exchange, and also has trading agreements with the Abu Dhabi Securities Exchange.

Asked about the volatility in global stock markets recently, which some have blamed on computerised trading and volatility linked instruments, she said: “I think markets have been through human emotions and human logic.

“In a growth environment, with low unemployment, tax reform and rising wages, it looks like interest rates will have to rise. It is human emotion to say: ‘I’ve made 30 percent this year and it’s time to cash out,’ especially for retail investors. Humans are in charge of decisions on the markets.”

She said that the US exchange authorities believed it was too early to set up exchange traded funds in bitcoin, the beleaguered cryptocurrency. “The markets that underly the bitcoin price are still imperfect markets,” she said.