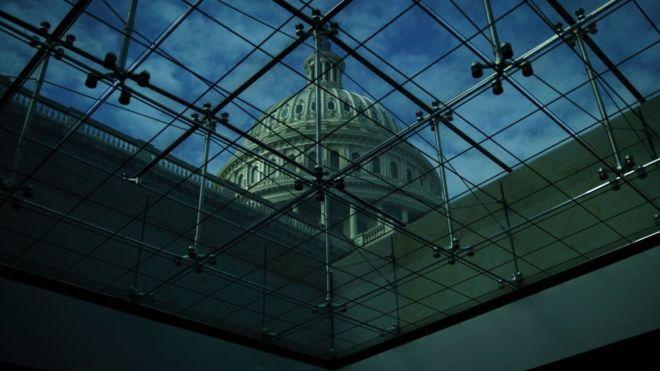 US President Donald Trump has unveiled his long-touted plan to revamp US infrastructure, but critics labelled it a “scam”.

Mr Trump wants Congress to authorise $200bn (£144bn) over a decade to spend on roads, highways, ports and airports.

The president hopes the US states and private sector will stimulate another $1.3tn in improvements.

The plan was a Trump election promise, but it could entail Americans paying higher local taxes, fees and tolls.

The blueprint is part of a $4.4tn budget proposal which abandons the long-held Republican goal of balancing the federal budget within a decade.

“We have spent $7 trillion in the Middle East, $7 trillion. What a mistake,” Mr Trump said at the White House on Monday.

“And we’re trying to build roads and bridges and fix bridges that are falling down and we have a hard time getting the money and its crazy.”

What’s in the blueprint?

A senior administration official who briefed reporters over the weekend said the $200bn investment would be paid for “out of savings from other areas of the federal budget”.

The plan calls for $50bn of public funding dedicated to modernising infrastructure in rural areas, many of which voted for Mr Trump in the 2016 elections.

The proposal includes $100bn for an incentives programme “to spur additional dedicated funds from States, localities, and the private sector”.

The administration also seeks $20bn in loans and bonds to finance projects including transportation and water.

The blueprint allows states to add or increase tolls on inter-state highways, and to charge fees to use highway rest areas.

However, it bans states from charging for “essential services such as water or access to restrooms”.

The plan also seeks to reduce the time required to obtain environmental permits.

The Trump administration is planning to sell off Reagan National and Dulles International airports near Washington DC as part of the proposal.

“The Federal Government owns and operates certain infrastructure that would be more appropriately owned by State, local, or private entities,” the plan says.

A legislative bridge to nowhere?

If there’s one thing politicians love, it’s infrastructure spending. It creates jobs, pleases businesses and gives officeholders something tangible to point to when constituents ask what they’ve done for them lately. So it’s quite a remarkable achievement for the Trump administration to have come up with an infrastructure plan that will likely be of limited popularity and difficult to pass in Congress.

The main problem for the White House is that the proposal allocates no new funds for bridges, railways, roads and tunnels. Instead, it recommends taking money out of other government programmes – although it leaves to Congress the unenviable task of determining what gets the axe.

In addition, the plan leans heavily on states and localities to pick up the tab for the projects. Their budgets are always tight, and recent cuts to federal deductions for state and local taxes will make it harder to raise revenue.

Then there’s the private funding component of the proposal. While it seems attractive in theory, tolls and fees that line corporate pockets have long been unpopular with Americans.

This doesn’t mean an infrastructure bill won’t happen. Chances are, however, what Congress passes will look very different from what was presented on Monday.

It does not offer as much new federal funding as Democrats seek. They have advocated public infrastructure investment of five times the amount just proposed by Mr Trump.

“After a full year of empty boasts, the president has finally unveiled a puny infrastructure scam that fully fails to meet the need in America’s communities,” said House Democratic leader Nancy Pelosi.

On the right, deficit hawks are likely to baulk at any new spending unless savings can found elsewhere in the budget.

Some critics say the administration’s plan is a bid to privatise the nation’s infrastructure, shifting the cost burden on to states, which would pass it on to citizens.

Environmentalists say the proposal to streamline the review process for permits would increase risks to vulnerable wildlife.

“It’s a scam to line the pockets of corporate polluters by gutting protections for our environment,” said the Center for American Progress.

But one prominent business group was full of praise for the president’s proposal.

“It could help us reclaim our rightful place as a global leader on true 21st-century infrastructure,” said Jay Timmons, head of the National Association of Manufacturers.

The administration has called this proposal a starting point for negotiations.

But Mr Trump has made it a legislative priority this year, as November’s mid-term congressional elections loom.

The president met state and local officials on Monday, including the governors of Wisconsin, Louisiana, Virginia and Maine.

He will try to sell the proposal to congressional leaders on Wednesday.