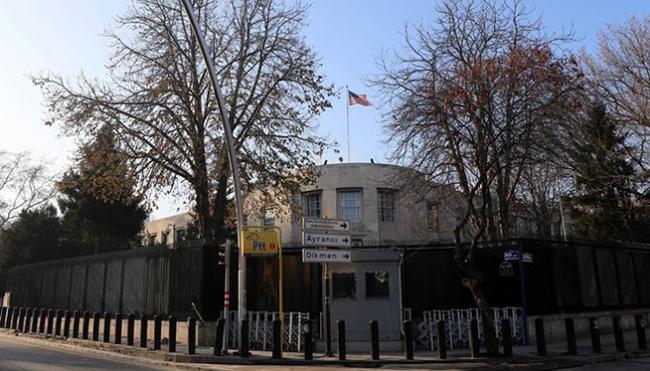 Amid tension between Turkey and the US over a Turkish operation in the Afrin region of Syria, the mayor of Ankara said on Monday he had approved re-naming a street outside the US Embassy as “Olive Branch” the name Turkey uses for its ongoing military campaign in Syria, Reuters reported.

“We have signed the necessary proposal to change the name of the Nevzat Tandogan Avenue in front of the U.S. Embassy to ‘Olive Branch.’ May it go well, may the souls of our saintly martyrs rejoice,” Ankara Mayor Mustafa Tuna tweeted.

The street on which the United Arab Emirates Embassy is located in Ankara was changed in January to reflect Turkey’s Ottoman heritage in the Middle East, including its defense of Muslim holy sites, in the wake of a diplomatic spat between Turkey and the UAE.

The move by the mayor came just days before US Secretary of State Rex Tillerson is due to visit Ankara, on Thursday.

Turkish Foreign Minister Mevlüt Çavuşoğlu on Monday warned Washington that Turkish relations with the US are close to breaking, the state-run Anadolu news agency reported.

“Ties with the US are at a very critical point. We will either fix these relations, or they will break completely,” Çavuşoğlu told reporters on the sidelines of a Turkish-African meeting in Istanbul.

“We want concrete steps [from the US]. The missing trust needs to be restored. The reason for that missing trust is the US,” he said, criticizing the US for supporting the Syrian Kurdish Democratic Union Party (PYD) in Syria.

Prime Minister Binali Yıldırım also on Monday strongly criticized the US over relations with the Kurdish militant group in Syria, saying Washington better pull itself together.

“The US, our ally in NATO who we thought of as a strategic partner for a long time, better pull itself together and make a real decision,” Yıldırım said during a joint press conference with his Macedonian counterpart, Zoran Zaev, in Ankara.

The Turkish military and Free Syrian Army (FSA) fighters on Jan. 20 launched Operation Olive Branch in the Afrin region of Syria against the PYD, which Turkey sees as the Syrian extension of the outlawed Kurdistan Workers’ Party (PKK).