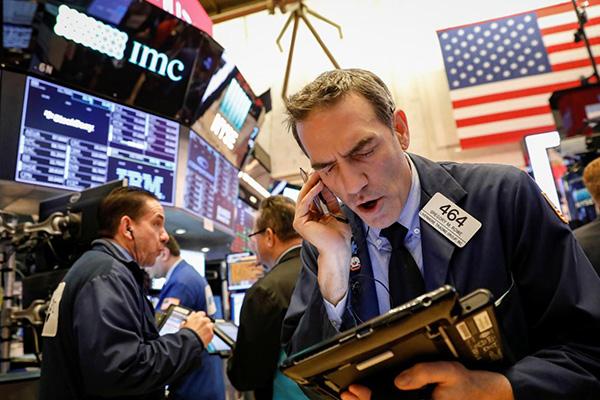 The announcement of President Donald Trump’s budget, including an infrastructure spending plan, helped sectors such as S&P materials and industrials.

But the bigger factor was likely the S&P’s test and rebound from a key technical level on Friday when it briefly fell 11.8 percent from its Jan. 26 record and below its 200-day moving average during that session, according to strategists.

“Investors probably were mulling things over the weekend and concluded that the economy is fairly strong, earnings are holding up, so there’s no particular reason to panic or sell. So some money probably came back into the market,” said John Carey, portfolio manager at Amundi Pioneer Asset Management in Boston.

“You test the key support level and go back and test it again, which is what we did on Friday,” he said.

But while last week’s panic selling appeared to be done, strategists were not calling an end to the pullback. The S&P still closed 7.6 percent below its Jan. 26 record closing high. It confirmed a correction on Thursday, when it dropped 10 percent below the record.

Jeff Schulze, investment strategist, at Clearbridge Investments, in New York is expecting more volatility “as the tug-of-war from short-term negative price momentum is put up against the long-term fundamentals.”

He said ”the long-term fundamentals will win out, but I think volatility will also be part of that equation.”

The S&P materials sector was the biggest percentage gainer with a 2.1 percent rise followed by a 1.8 percent gain in information technology

Stocks were helped a little by Trump’s budget proposal for fiscal 2019, which includes $200 billion for infrastructure spending, more than $23 billion for border security and immigration enforcement, as well as $716 billion for military programs, including the U.S. nuclear arsenal.

The CBOE Volatility Index, the most widely followed barometer of expected near-term stock market volatility, ended down 3.45 points at 25.61, its lowest close since Feb. 2.

The market took fright after strong wage-growth data on Feb. 2 raised the specter of rising inflation and fears of accelerated interest rate hikes, which ignited a rally in bond yields and a sell-off in stocks.

The S&P’s biggest boosts from single stocks came from Apple Inc, which rose 4 percent, and Amazon.com, which ended up 3.5 percent.

Advancing issues outnumbered declining ones on the NYSE by a 2.80-to-1 ratio; on Nasdaq, a 1.90-to-1 ratio favored advancers.

About 8.13 billion shares changed hands on U.S. exchanges compared with the 8.5 billion average for the last 20 trading days.