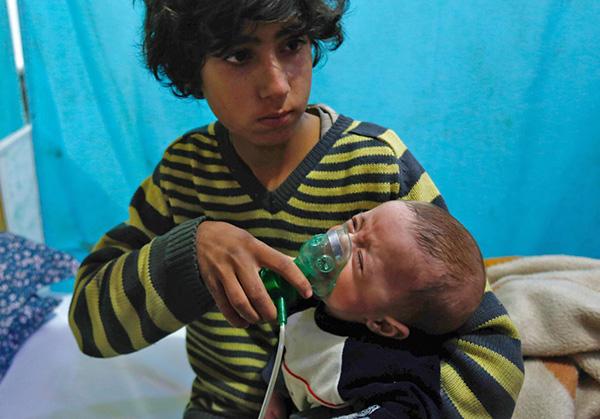 Since the earliest reports of chemical weapon use in the Syrian conflict, a growing community of denialists has emerged, comprising online commentators, bloggers, pro-Assad activists, and fringe websites.

This in itself is not usual. From 9/11 to the Las Vegas mass-shooting, online communities have coalesced around opinions and theories about what “really happened.”

What is unusual about this community is how their views are beginning to creep into mainstream discourse about the use of chemical weapons in Syria, and how that is being used to undermine investigations that attempt to establish the facts surrounding these crimes.

The Russian government has played a key role in amplifying these theories to undermine genuine investigative work. Their reaction to the August 21 2013 Sarin attacks that killed hundreds was to embrace various (often contradictory) conspiracy theories from fringe figures absolving the Syrian regime of responsibility.

On August 23 2013, Russian Foreign Ministry spokesman Aleksandr Lukashevich stated that “on the Internet, in particular, reports are circulating that news of the incident carrying accusations against government troops was published several hours before the so-called attack. So, this was a pre-planned action.”

This assertion was based on the claim from various pro-government sites that the YouTube videos of the attack had time stamps from August 20 2013. This was, in fact, a result of the display date being based on the local server time from the US west coast, which meant that a video uploaded in the early morning in Syria would carry a timestamp that was 9 hours ahead of California.

Despite this simple explanation, the allegation persisted. It was even repeated by Russia’s Foreign Ministry Sergei Lavrov a few days later.

But as this conspiracy theory became untenable, the Russian government turned to another, courtesy of the Syria based Mother Superior Agnes Mariam de la Croix. She claimed that the attacks had been staged, and that the victims were in fact kidnapped Alawites from pro-government areas, killed as part of the deception.

This claim quickly collapsed as it failed to substantiate its claim. Meanwhile an investigation by Peter Bouckaert, emergencies director of Human Rights Watch, found that among other problems with her claims, the claim was dismissed even by families of abducted Alawites. All the same: Lavrov promoted this claim too.

But it is not enough to present alternative theories . One of the key weapons in the chemical weapon denialist arsenal is discrediting and demonising individuals and organisations who witness and document events on the ground, including chemical weapon attacks. Whatever their disposition, they end up being branded as belonging to or being in cahoots with Al Qaeda or ISIS.

With access to opposition held areas severely restricted, these groups and individuals are usually the only source of information in the aftermath of chemical attacks. Labelling them terrorists is a convenient way for the chemical truthers to dismiss their testimony.

Chief among these targets are the Syrian Civil Defence, also known as the White Helmets, and their key supporter, Mayday Rescue. As the only organised rescue service in many opposition held areas, information collected by the White Helmets, often with body cameras worn by rescuers, has become an important source of information about the situation on the ground in Syria. In recent years they have played a key role in documenting chemical attacks and passing information onto the OPCW and other investigators.

The White Helmets franchise is a terrifying extension of soft power infiltration deep inside target nations, exploiting trust, vulnerability and poverty with the “First Responder” construct that “everyone trusts” as James Le Mesurier [Mayday Rescue’s Founder] so clearly stated in a recent interview in Brazil.

This pseudo Humanitarian, NATO state-sanctioned fist will be used to crush many more nations in the future if it is not stopped in Syria. Just as Syria has contained the terrorist fire within its borders, so has it exposed the White Helmets as the terrorist alter ego, but for how long will both be contained?

Terrorism is fanning out into Europe via the EU funded Turkish exit routes, the White Helmets are also establishing themselves further afield, in Venezuela, Malaysia, the Philippines to name a few. Terrorism and the White Helmets march in lock-step and can only be stopped by confronting the cancerous cultures in which they are cultivated — US Necolonialism, British Imperialism, EU Globalism, Gulf State Extremism & Israeli Parasitism.

Russia promotes Beeley’s views (and those like hers) on Russian state funded media. But, more consequently, it also uses her views in more august fora.

After the April 4 2017 Sarin attack in Khan Sheikhoun, Russian Deputy Ambassador to the UN, Peter Illichev, submitted a presentation by Beeley, The White Helmets – Fact or Fiction, to the United Nations General Assembly.

In the debate that followed the publication of the OPCW-UN Joint Investigative Mechanism (JIM) report which blamed the Syrian government for the Khan Sheikhoun attack, the Russia’s deputy representative to the UN Vladimir Safronov, told the security council:

All conclusions of their work were based on indirect testimonies, most of which was provided by the opposition and by NGOs that have no credibility, such as the White Helmets which are closely associated with Jabhat al-Nusra terrorists.

Thus demonising those organisations who are best placed to gather information on chemical attacks and other war crimes has become a key strategy of chemical weapon truthers and denialists in their attempts to undermine the work of investigative bodies, from NGOs to OPCW-UN JIM.

While chemical attack denialism has often been relegated to fringe and Russian state media, there have been occasions where more mainstream voices and media organisations have promoted claims about chemical attacks that are riddled with inaccuracies.

Veteran journalist Seymour Hersh has become particularly notorious for his work on chemical attacks in Syria, first on the August 21st 2013 Sarin attacks in Damascus, then the Sarin attack in Khan Sheikhoun on April 4th 2017.

In articles for the London Review of Books, Hersh laid out a narrative where the August 21st 2013 Sarin attacks in Damascus were a carefully orchestrated false flag attack by rebels using Turkish help.

The problem was, Hersh’s story was full of holes, inaccuracies, and fanciful claims with no evidence to support them. Hersh only spoke about “homemade” rockets, when some of the rockets used were Soviet era M14 140mm artillery rockets.

He had no explanation for the massive volume of Sarin used requiring an expensive and complex chemical process and supply chain. Nor could he explain the presence of rockets known to be unique to Syrian government forces used in the attack.

After the April 4 2017 Khan Sheikhoun Sarin attack Hersh returned with his latest chemical weapon investigation, this time published in Germany’s Die Welt . In the article ( Trump‘s Red Line ), Hersh claimed that Russia had provided the regime with a precision bomb to target a terrorist meeting, but the bomb also incinerated a room full of cleaning supplies, which created a toxic cloud resulting in the massive number of casualties.

The problem was, as the OPCW-UN JIM report into the attack showed, this was a complete fantasy, that not even the Syrians and Russians supported. Even though the body set up to investigate chemical attack in Syria showed Hersh’s scenario was complete fiction, Welt has never issued a correction, and Hersh’s response to the criticism was that he had “learned just to write what I know, and move on”.

The problem with these stories in respectable publications is the majority of readers are understandably not up to date on the minutiae of the conflict, which means these stories make a great deal of impact, even though they are demonstrably wrong.

Through respectable publications, conspiracy theories acquire broader legitimacy corroding the factual basis of public discourse. When facts and opinions are put on equal footing, it destroys the very basis of informed judgment. It also suggests that people on the ground are lying, the evidence cited by the OPCW-UN JIM is fake, and that Western governments are actively participating in a conspiracy against Bashar al Assad, with all the people opposing him as their accomplices.

Newsweek itself has recently published an opinion piece that is symptomatic of this trend. In Now Mattis admits there was no evidence Assad used poison gas on his people, Ian Wilkie, claims that Secretary of Defense James Mattis stated there was “no evidence” the Syrian government used Sarin, stating that “ Mattis offered no temporal qualifications, which means that both the 2017 event in Khan Sheikhoun and the 2013 tragedy in Ghouta are unsolved cases in the eyes of the Defense Department and Defense Intelligence Agency.”

Seemingly a damning statement, but one taken out of context, with Mattis’ full remarks referring to the 2013 and 2017 attacks:

Q:  Just make sure I heard you correctly, you’re saying you think it’s likely they have used it and you’re looking for the evidence?  Is that what you said?

SEC. MATTIS:  That’s — we think that they did not carry out what they said they would do back when — in the previous administration, when they were caught using it. Obviously they didn’t, cause they used it again during our administration.

And that gives us a lot of reason to suspect them.  And now we have other reports from the battlefield from people who claim it’s been used.

We do not have evidence of it.  But we’re not refuting them; we’re looking for evidence of it.  Since clearly we are using — we are dealing with the Assad regime that has used denial and deceit to hide their outlaw actions, okay?

Wilkie takes this misrepresentation of Mattis’s statement as confirmation that the theories surrounding 2013 and 2017 attacks claiming the Syrian government wasn’t responsible were correct all along, and in turn, the community of chemical weapon denialists and truthers has spread the Newsweek piece, citing it as proof that they were right all along.

Presenting these views in mainstream publications, be they the London Review of Books, Welt, or Newsweek, is not presenting another perspective, or encouraging debate; it’s promoting the idea that facts are no longer sacred; truth is a matter of opinion; official bodies set up to investigate these incidents are compromised; victims are performers; and rescuers are belligerents.

This is dangerous, Orwellian inversion of reality. This is not the debate on Iraq’s WMD, this is the debate on whether or not Sandy Hook victims were really crisis actors, or if Israelis were told not to go to work at the World Trade Center on 9/11.

This is what Russia wants, and this is what Assad wants, as it lets the perpetrators escape justice, and leaves the victims to rot.