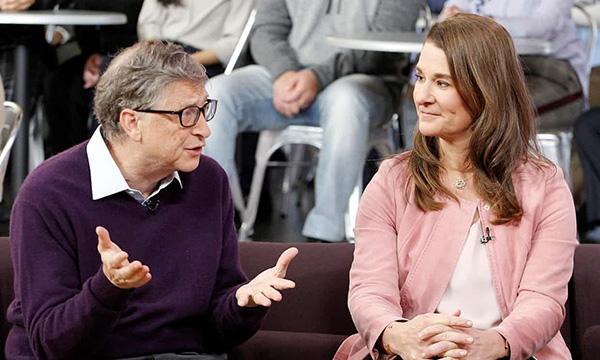 In remarks accompanying the annual letter to the public about global development issued by their philanthropic foundation, Melinda Gates said: “I wish our president would treat people, and especially women, with more respect when he speaks and tweets.”

And Bill Gates warned that the proposed Trump administration budget could directly lead to millions of preventable deaths around the globe, due to proposed vast cuts to foreign aid and development funds.

“US generosity: if that goes away, even a 10% cut would mean 5 million deaths over the next decade,” he said at an event with his wife to launch the Bill and Melinda Gates Foundation’s 2018 letter.

The Trump administration, as it did last year, proposed billions of dollars in cuts to foreign aid, which makes up less than 1% of US spending, in its 2019 budget outline. Last year, lawmakers in Congress from both parties mostly ignored the request, and Gates said he hoped they would again this year too.

“Those kinds of comments just don’t belong in the public discourse,” she told the Associated Press. She added that while some of Trump’s comments about women have troubled her, his rejection of the feminist label has not.

“Some men have trouble and some women, quite frankly, have trouble embracing that term and what it means, so that honestly doesn’t bother me. It’s more the specific comments he’s made over and over again about specific people or minorities or women that just do not reflect the values I see across the United States,” Melinda Gates said.

In the letter, the couple said: “Equality is an important national principle. The sanctity of each individual, regardless of race, religion, sexual orientation, or gender, is part of our country’s spirit.”

Meanwhile, Bill Gates called on Trump not to cut aid to the developing world.

“To have Africa be stable, to have health systems that stop pandemics, and to reduce the chance of our army having to go fight somewhere and lose lives: these investments, even in that sort of ‘America first’ mindset, are still very, very wise,” said Bill Gates, referencing Donald Trump’s longstanding rhetoric dismissing foreign aid as a wasteful handout to non-Americans.

Melinda Gates added: “If you believe in any form of soft power, if you believe that the world is more peaceful when it is prosperous and low-income nations can build into middle income nations, then you invest in foreign aid. It makes absolutely no sense to us when we see administration budgets come forward and there are huge cuts.”

The Gates foundation is the largest philanthropic organization in the world, with an endowment of more than $40bn. It tackles issues related to infectious disease, education, family planning, and women’s rights. For the past 10 years, ever since Bill Gates’ fellow billionaire Warren Buffett padded the endowment with $30bn, expanding the organization into its current size and scale, Melinda and Bill have released an annual letter outlining the state of their work and focus areas for the following year.

Despite concern about the effects of possible cuts to US aid, the Gateses’ underlying message in the letter and on stage Tuesday was one of optimism. “The world is getting better by almost every objective measure,” Bill Gates said, citing the example of child mortality, the foundation’s top priority in recent years. “When we got going, about 12 million kids were dying a year under the age of five. Now, because of vaccines and things that we’ve done with partners, that number is under 5 million.”

The discussion was wide-ranging, with the couple fielding questions on topics from healthcare and climate change, to neo-colonialism and the rise of artificial intelligence.

Hosted by Lin-Manuel Miranda, the award-winning writer and composer, the conversation only occasionally drifted into national politics – generally comprising the most dour moments.

After describing his exasperation that many US lawmakers still doubted the scientific fact of climate change, for example, Bill Gates bemoaned the current state of US politics, saying: “It’s a tough time in politics where it’s like you’re more for the group that you’re in than you are for the actual factual exploration.”

The Guardian’s global development content is supported by a grant from the Bill and Melinda Gates Foundation.

Greek theatre Group to stage a play on Armenian genocide

Tigran Jrbashyan: for 30 years we have been building a “kingdom of crooked mirrors.” If we don’t think strategically, we can lose the country.