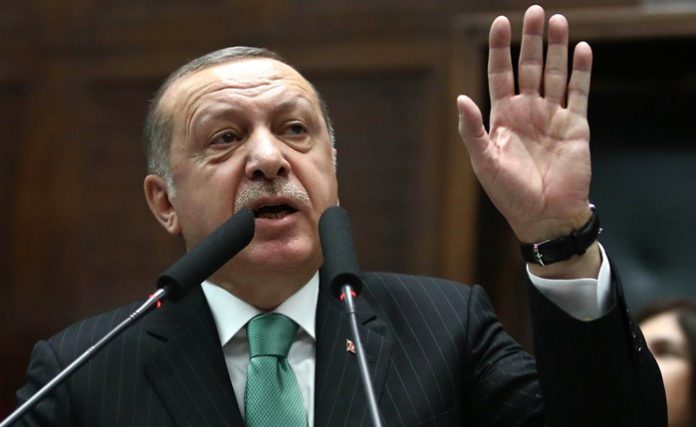 A decision by the United States to continue to fund the Syrian Kurdish People’s Protection Units (YPG) militia will affect Turkey’s future moves, President Tayyip Erdoğan said on Tuesday, adding that any aggression on the part of US forces in the Syrian town of Manbij could expect to receive an “Ottoman slap,” Reuters reported.

“It is very clear that those who say ‘we will respond aggressively if you hit us’ have never experienced an Ottoman slap,” Erdoğan said in Parliament, an apparent reference to comments made by US Lt. Gen. Paul Funk during a visit to Manbij.

US officials have said Secretary of State Rex Tillerson expects to have difficult conversations when he visits Turkey on Thursday and Friday given that the NATO allies have starkly diverging interests in Syria.

Turkey has been angered by US support for the Syrian Kurdish YPG militia, which Ankara sees as a terrorist organization and an extension of the outlawed Kurdistan Workers’ Party (PKK). Washington has backed the YPG in the fight against the Islamic State in Iraq and the Levant (ISIL) in Syria.

“Our ally’s decision to give financial support to the YPG … will surely affect the decisions we take,” Erdoğan said in a speech to members of his ruling Justice and Development Party (AKP) in Parliament.

His comments followed the release of the US Department of Defense 2019 budget, which includes requests for funds to train and equip local forces in the fight against ISIL in Syria.

The Pentagon requested $300 million for Syrian “train and equip activities” and $250 million for border security requirements, according to a copy of the budget. While it did not specify how much of this, if any, was earmarked for YPG-led forces, Turkish media interpreted that to mean that the Pentagon had allocated $550 million to the YPG in 2019.

Turkey last month launched “Operation Olive Branch” in Syria to clear the YPG from its southern border. It has also threatened to press on to the Syrian town of Manbij, under the control of a YPG-led force, and has warned American troops stationed there not to get in the way.

Washington says it has no plans to withdraw its soldiers from Manbij, and two US commanders visited the town last week to reinforce that message.