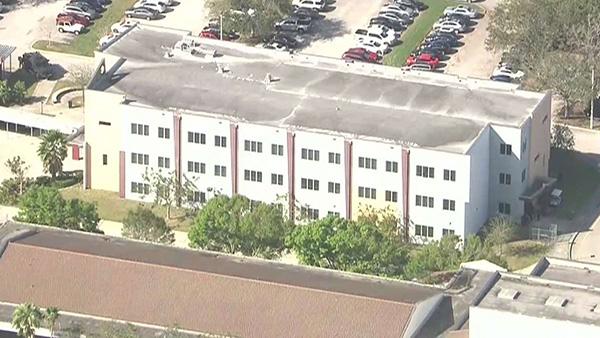 At least 20 students were feared hurt in a shooting Wednesday at a high school in Parkland, Florida, as local media reported a student was considered a person of interest.

Marjory Stoneman Douglas High School is under lockdown and police are on the scene after reports of shots fired and potential victims, officials said Wednesday.

According to WSVN, the Margate Fire Rescue team described the scene as a mass casualty incident, meaning at least 20 people had been injured.

The scene, according to a tweet from the Broward Sheriff’s Office, was still active and the shooter is still at large.

Dispatch at the sheriff’s office confirmed the school was on lockdown and police were on location.

Coral Springs Police asked the public to avoid the area of the high school, saying it was an active scene. A nearby middle school was also put on lockdown as a precaution, officials said.

Authorities also said students and teachers should remain barricaded in the school until they could be reached by police.

A number of students were seen walking or running from the area, the outlet said.

A person who claims to be at the scene posted pictures to Twitter of themselves hiding beneath desks in one of the classrooms.

In a tweet from Broward Schools, the high school is dismissing students and the district’s Special Investigative Unit, along with law enforcement, were on site.

Governor Rick Scott said on Twitter that he’d spoken to the Broward Sheriff Scott Israel, as well as other officials, in regards to the incident and will “continue to receive updates from law enforcement.”

The FBI is also in touch with local authorities and responding to the incident, Fox News confirmed.

The is a developing story; please check back for updates.

US Reportedly Names Condition for Russia to Avoid New Sanctions