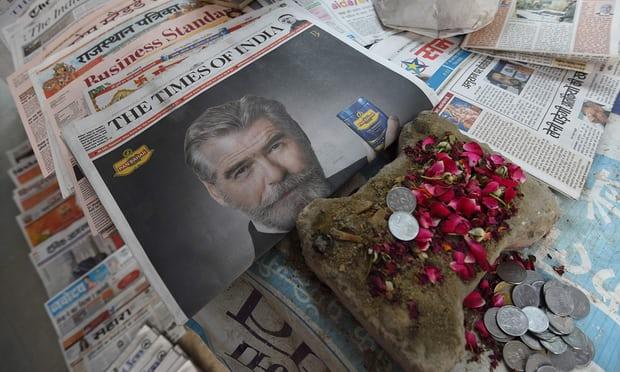 Delhi health officials have threatened to fine or jail the actor Pierce Brosnan if he fails to explain why he appeared in adverts for a chewing mixture that sometimes includes tobacco.

Brosnan appeared nearly 18 months ago in TV and newspaper ads for a brand of pan masala, a popular Indian mixture that can contain tobacco, lime, spices and nuts.

The specific variety Brosnan was endorsing did not contain tobacco but some of the company’s products include supari, a kind of nut considered by the World Health Organisation to be carcinogenic.

The campaign was suspended after causing an uproar, and Brosnan said he was “deeply shocked and saddened” that his image had been used to promote a potentially harmful product.

On Monday the Delhi health department issued a show-cause notice to the Irish actor demanding he explain his appearance in the commercials, which it claims were a form of “surrogate advertisement” intended to evade a ban on promoting tobacco.

“We have issued the notice to Pierce Brosnan through the company, and also reached out to him via social media platforms,” SK Arora, a health official with the Delhi government, told the Indian Express.

Pan masala products containing tobacco have been known to increase the risk of mouth and throat cancers. The red-tinted teeth of regular chewers are a common sight across India and red splotches of pan masala stain many Indian streets.

Brosnan said at the time of the controversy he was under the impression he was promoting a “breath freshener/tooth whitener [and] all-natural, containing neither tobacco, supari nor any other harmful ingredient”.

He said the company, Pan Bahar, had “grossly manipulated” the advertisements to suggest the star was endorsing its entire product line.

“Having endured, in my own personal life, the loss of my first wife and daughter as well as numerous friends to cancer, I am fully committed to supporting women’s healthcare and research programmes that improve human health and alleviate suffering,” Brosnan said.

Pan Bahar has denied it misled Brosnan and emphasised that its product is a mouth freshener that should not be associated with chewing tobacco.