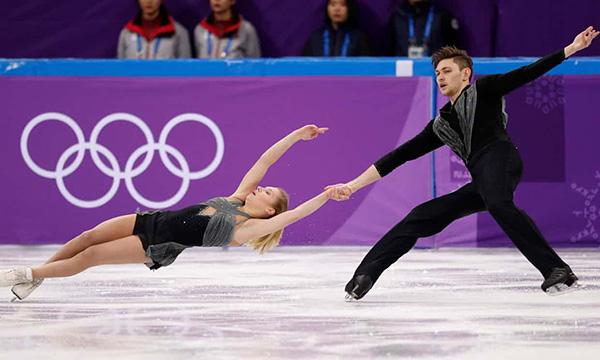 History was made at the Gangneung Ice Arena on Wednesday when Harley Windsor, a figure skater from the western suburbs of Sydney, became the first Indigenous Australian athlete to compete at a Winter Olympics.

The 21-year-old, along with his Russia-born partner Ekaterina Alexandrovskaya, delivered a near-clean short program to a cover version of the Rolling Stones song Paint it Black.

Skating second, their score of 61.55 briefly put them top of the leaderboard but ultimately it was not enough to progress to Thursday’s free skate. They were edged out of the top 16 with just one couple to perform, eventually finishing 18th.

Windsor, a rugby league fan, famously discovered ice-skating at the age of eight after his mother, Josie Winsor, from the Weilwyn and Gamilaraay people, took a wrong turn and they ended up outside the skating rink in Blacktown.

His interest pricked, Windsor strapped on a pair of skates and has never looked back. His rise since that fateful day has been rapid. He and Alexandrovskaya count the world junior and Australian national titles among their achievements together.

The Rooty Hill-raised athlete partnered with Alexandrovskaya for the first time during a try-out in Moscow two years ago, and after hitting if off, Alexandrovskaya was released by the Figure Skating Federation of Russia and granted Australian citizenship in October last year.

Windsor’s mother was in the stands while his father Peter Dahlstrom, of Gamilaraay and Ngarrable descent, was tuning in from Sydney.

“It felt good to have the support,” Windsor said. “It’s pretty special knowing so many people were cheering me on.

“The attention has been amazing and I just hope I’ll be a bit of a role model now,” Windsor said. “Hopefully more Indigenous kids get into winter sports.”

The last Australians to compete in the Olympic pairs were Danielle and Stephen Carr 20 years ago in Nagano.