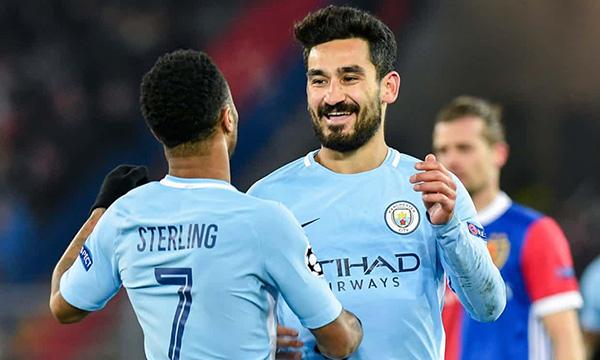 Manchester City are surely coasting into the Champions League quarter-finals for only the second time in their history after this emphatic win.

Pep Guardiola stressed the need to retain focus when the last-16 second leg is played in three weeks’ time. Yet this was a dream result for the manager as it allows him to rest players for the return, which the manager indicated might happen.

“So important to be able to do so,” said Guardiola. “The Champions League is 180 minutes but we are almost there. I’m not saying it’s done because in football anything can happen but it’s an amazing result.”

The Catalan suggested City can win an unprecedented quadruple. “In the Premier League we are in an amazing position, 16 points in front. We are almost in quarter-finals of Champions League and in one final [Carabao Cup] and have an opportunity to get to quarter-final of the FA Cup. All we can do is take it seriously and do good in the [next] game,” he said.

Guardiola’s selection showed two changes from the win against Leicester on Saturday. Out went Oleksandr Zinchenko and Aymeric Laporte and in came Fabian Delph and Vincent Kompany making a first Champions League appearance since May 2016.

City started on the front foot, winning three corners and going close with an Ilkay Gündogan header. Dimitri Oberlin had Basel’s opening chance, racing in behind and when Ederson charged out he should have chipped the goalkeeper but failed, allowing Nicolás Otamendi to clear.

This was a warning for City to tighten up and eliminate the kind of amateurish defending that had them knocked out by Monaco a year ago. When Oberlin again ran free, this time along the right, he drove into the area, collided with Otamendi and St Jakob Park roared for the penalty. Jonas Eriksson was unmoved which had Raphael Wicky complaining to the fourth official, Mehmet Culum.

Basel’s manager would have felt doubly aggrieved moments later as City took the lead. This was simple stuff: Kevin De Bruyne swung a corner in from the left and Gündogan beat Fabian Frei to head past Tomas Vaclik from a narrowing angle.

De Bruyne instigated the City second by rolling the ball along the left to Raheem Sterling. The winger crossed, Bernardo Silva beat Vaclik and Guardiola’s men were off to a flyer.

Imperative now was for City to keep playing while closing the holes they had thus far allowed. An effective way of doing this is to score again and so up stepped Sergio Agüero to beat Vaclik from outside the area: the Czech may have been wrong-footed but, as with Gündogan’s strike, he failed to move.

Agüero’s goal had arrived on 23 minutes, which meant City’s task was to be ultra-professional and keep their foot on Basel’s throat.

As at the start of the first half Oberlin broke clear during the opening moments of the second. This time Delph raced across to nick the ball and the danger died.

Next Mohamed Elyounoussi tested Ederson with Basel’s first shot, the Brazilian flinging himself impressively to his left to concede a corner.

This woke City up. Swift ball recycling between Delph, Kompany, Agüero and Otamendi took Guardiola’s side over halfway. After a Kyle Walker surge down the right play eventually switched to a central area and now City did score number four. This was classy from Gündogan – a neat step right to create space, a waft of his boot and Vaclik was beaten again.

Oberlin went close with a header but this was a demoralising task for the home side to try to save some face in front of their support. The pattern continued: City could attack at will, moving through the Swiss with the hypnotic pass-and-move play that has become familiar under Guardiola.

He was allowed the luxury of taking off Sterling and De Bruyne – on 57 and 63 minutes – and it was the former’s replacement, Leroy Sané, who created City’s next chance.

The winger slipped down the left and found Gündogan, who missed a chance for a hat-trick by hitting feebly at Vaclik. In the final analysis it should matter little.

Guardiola added that illness prevented Yaya Touré from travelling and it is unclear if he will recover for Monday’s FA Cup tie at Wigan Athletic.