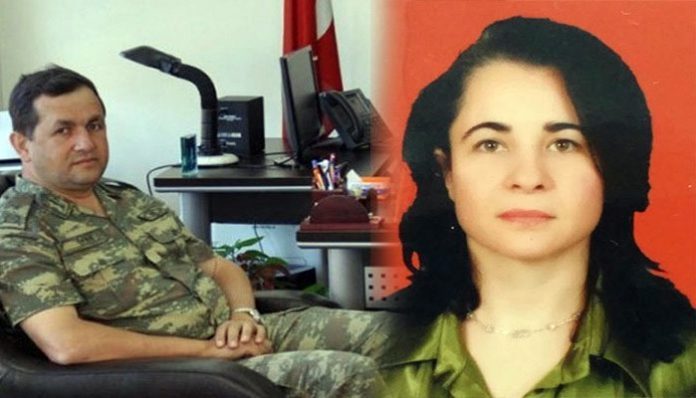 The widow of Brig. Gen. Semih Terzi, Nazire, who was sentenced to 18 years in prison on Monday, has said the night of a failed coup attempt on July 15, 2016 and the killing of her husband for being a coup plotter are shrouded in mystery and that the only thing she wants is for the facts to come out.

Semih Terzi was killed by noncommissioned officer Ömer Halisdemir at the Special Forces Command in the Gölbaşı district of Ankara during the coup attempt. Reportedly, Terzi would take over the Special Forces Command with the putschist soldiers accompanying him if he were not killed. His death is believed to be one of the turning points that led to the failure of the coup attempt.

Nazire Terzi, who was jailed for 559 days, was handed down a jail sentence of 18 years at the final hearing of her trial at the Ankara 13th High Criminal Court. She is accused of “aiding the crime of violation of the constitution,” although she said her “only crime was to be the wife of Brig. Gen. Terzi.”

In her final defense, Terzi talked about the inconsistencies and contradictions related to the night of the coup attempt and her husband’s death.

“My husband Terzi returned from northern Iraq on the morning of July 15, and he went to Silopi [in Şırnak province]. He came to Ankara at 02:30 on July 16. According to the autopsy, the time of death was 23:30. This means my husband was killed even before he came to Ankara. Those who prepared this fake autopsy report should be investigated and tried. This report was corrected later on,” she said.

The woman said her husband was brought to the Gülhane Military Medical Academy (GATA) at 06:01, four hours after he was shot and according to witness reports, he was able to sit and talk when he was first brought to the hospital.

“He was not shot in the forehead contrary to what is being said. He was shot from behind. Then, a telephone calls was made to GATA telling [the people there] ‘Semih Terzi should not come out of there alive.’ My husband was taken to the examination room and then died,” said Terzi’s wife, adding that her husband was killed because some people were afraid of what he was going to say related to the coup attempt.

Although it is claimed that Halisdemir killed Terzi in self-defense, Nazire Terzi said her husband did not have a gun and was shot from behind, not in the forehead.

“How can someone without a gun be killed out of self-defense,” she asked.

According to Nazire Terzi, the killing of Halisdemir and the report of his death should also be investigated because there are claims that some people who were not Special Forces Command staff members were there that night, although entry is forbidden to other people.

Halisdemir was killed by the putschists immediately after he shot Semih Terzi.

“I don’t care about my release or any other thing. I just want the facts to come out,” said Nazire Terzi.

There is widespread controversy about the background of the July 15 coup attempt. Some say President Recep Tayyip Erdoğan had knowledge of the attempt but did not prevent it in order to use it as a pretext for the purge of dissidents. There are also others claiming that Erdoğan was behind the coup attempt himself to launch a massive purge of his critics.