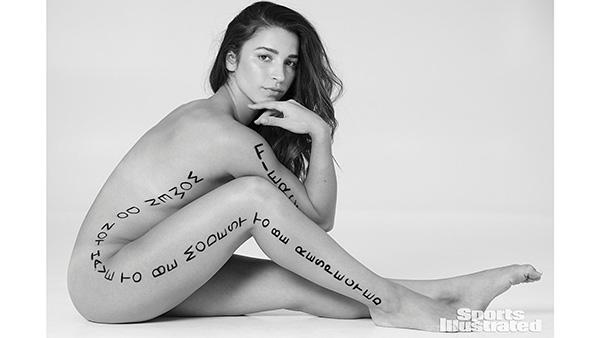 The Olympic gymnast has joined the magazine’s feature “In Her Own Words,” where the model poses nude with inspiring words and phrases such as “trust yourself,” “live for you” and “abuse is never okay” written on her body.

The move comes after Raisman made headlines recently for presenting a powerful 13-minute testimony against Larry Nassar during which she directly told the former Olympic doctor, “You are nothing.”

Nassar was sentenced to up to 175 years in prison after being convicted of the sexual abuse of more than 150 women.

“I would like to remind everyone that being a survivor is nothing to be ashamed of, and going through a hard time does not define you,” Raisman said to SI Swim. “I hope that we can one day get to a point where everyone realizes that women do not have to be modest to be respected. We are free to draw confidence and happiness in our own way, and it is never for someone else to choose for us or to even judge us for that matter.”

Raisman joins the ranks of Sailor Brinkley Cook, Paulina Porizkova and Robyn Lawley, who are also featured in the Sports Illustrated Swim spread that is meant to celebrate and promote diverse body types, according to SI Swim editor MJ Day.

“For me, ‘In Her Own Words’ serves as a reminder that we are all humans, we are all battling something, and it is OK to not be OK,” Raisman said. “We are not alone and we need each other.”

The Sports Illustrated Swimsuit issue drew backlash from those who mocked the magazine for attempting to empower women by having them pose nude.

In addition to posing for SI, the gymnast has also paired up with American Eagle lingerie brand Aerie, whose campaign boasts un-retouched images in order to help promote body positivity and acceptance.

“You lose a part of yourself when you’re abused,” Raisman recently told People. “I lost a part of myself, and I’m getting it back by speaking out.”

The gymnast added, “I’m just starting to realize how strong I am and I won’t be silenced.”

You can find Morgan M. Evans on Twitter @themizfactor.

The Father: Why Olivia Colman’s new film will leave you disoriented