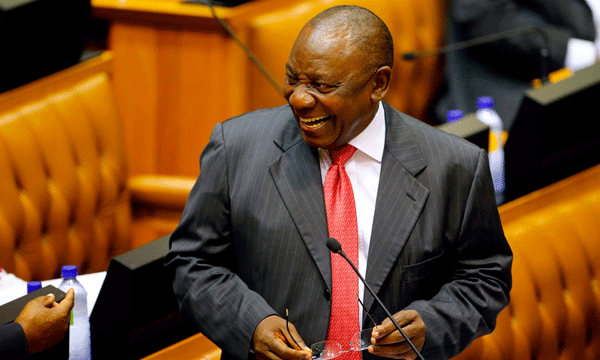 Cyril Ramaphosa has been elected president of South Africa by a parliamentary vote less than 16 hours after the resignation of his rival Jacob Zuma, following days of defiant refusal to leave office.

Ramaphosa – who, as deputy president, became interim leader immediately after Zuma’s late-night resignation on Wednesday – is being sworn in as head of state by South Africa’s chief justice in Cape Town.

The ruling African National Congress has a substantial majority in parliament and the vote is effectively a formality. Though deeply divided, the ANC has already closed ranks after the crisis of recent days and has rallied around Ramaphosa, 65, who was pictured jogging and posing with local residents on the Cape Town seafront early on Thursday morning.

Who is Cyril Ramaphosa?

The former president’s resignation put an end to an intense political crisis that threatened to inflict significant damage on the ANC, which has ruled South Africa since the country’s first free elections in 1994.

In a televised address to the nation late on Wednesday, Zuma said he was a disciplined member of the party, to which he had dedicated his life.

“I fear no motion of no confidence or impeachment,” he said. “I will continue to serve the people of South Africa and the ANC. I will dedicate my life to continuing to work for the execution of the policies of our organisation.

“No life should be lost in my name. The ANC should never be divided in my name. I have therefore come to the decision to resign as president of the republic with immediate effect.”

The announcement ended an extraordinary day in South African politics, which began with a dawn raid on the business family at the centre of recent corruption allegations levelled at Zuma.

Then, at noon on Wednesday, ANC officials announced they would vote for an opposition party’s no-confidence motion in parliament on Thursday.

Late in the afternoon, Zuma gave an angry and rambling TV interview that sought to justify his refusal to obey his party’s order to step down.

But his late-night speech was more confident and warm. Zuma started with a joke about the late hour and his trademark chuckle. He expressed his gratitude to the ANC and South Africans for the privilege of serving them at the “pinnacle” of public life, before saying “thank you” and “goodbye” in three local languages.

Zuma, a former anti-apartheid activist who has led the ANC since 2007 and been South Africa’s president since 2009, was due to leave power next year. His tenure has been marred by economic decline and multiple charges of graft, undermining the image and legitimacy of the party that led the struggle against apartheid.

The crisis of recent days has further damaged the ANC, as well as angering many South Africans who are becoming increasingly impatient with the party’s opaque internal procedures.

In December, Ramaphosa won a bitterly fought ANC leadership election. Party strategists wanted Zuma to be sidelined as quickly as possible, to allow the ANC to regroup before campaigning starts for elections in 2019.

The party suffered significant setbacks at municipal polls in 2016 and could be forced into a coalition government at the national level, experts say.

As president, Ramaphosa will have to balance the need to reassure foreign investors and local businesses with the intense popular demand for dramatic measures to address South Africa’s deep problems. The former trade union leader has said South Africa is coming out of a “period of uncertainty, a period of darkness, and getting into a new phase”.

Richard Calland, an expert in South African politics at the University of Cape Town, said the departure of Zuma from office would give Ramaphosa “the chance to rebuild government and the party at the same time”.

President elect Cyril Ramaphosa and Former Minister of Finance Trevor Manuel catching up at 6 am for a POWER walk on the Sea Point promenade this morning. No red socks and very few bodyguards. @eNCA #ZumaResigns . These are my running friends! pic.twitter.com/QoA3xEKZG1

In recent days, the rand has strengthened and many analysts have revised upwards their predictions of South Africa’s economic growth.

After Zuma’s address on Wednesday night, the ANC immediately closed ranks. Jessie Duarte, the party’s deputy secretary general, told reporters the ANC was “not celebrating” at a “very painful moment”.