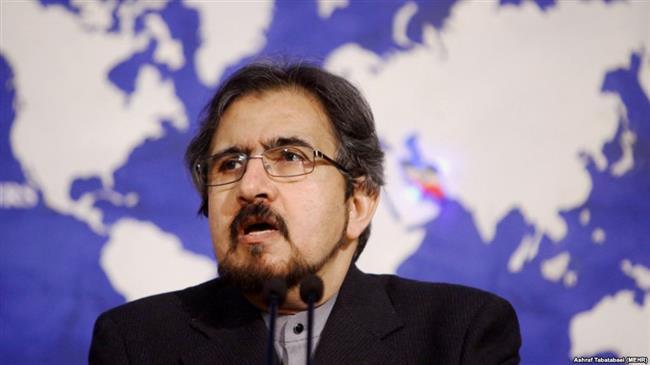 Iran has dismissed Germany’s “baseless” claim about its role in the recent escalation between Syria and Israel, saying the Tel Aviv regime, whose survival depends on chaos and confrontation, is to blame for the rising tensions in the region.

On Thursday, Foreign Ministry spokesman Bahram Qassemi said Iran as “a stable and stability-giving” country sees no need for a rise in tensions and confrontation in the already-troubled region.

Qassemi was reacting to recent comments by the German government’s spokesperson, Steffen Seibert, who voiced “concerns” about Iran’s “military engagement” in the region and claimed such a role “is leading to a dangerous escalation” in the conflict gripping Syria. Seibert also called on Iran “to abandon its aggressive stance towards Israel.”

The German official made the remarks days after the Syrian military shot down at least one intruding Israeli F-16 warplane that attacked positions inside Syria, where Iranian military advisors and the Russian air force have been helping the national army in its battles against Takfiri militant groups, including Daesh.

Israel later claimed that it had launched those assaults after it intercepted an “Iranian drone” launched from Syria, an accusation rejected by Tehran as “ridiculous.”

Qassemi further said the legitimate government of Syria has the “legitimate and legal right to defend its national sovereignty and the country’s territorial integrity in the face of any aggression,” rejecting the claim about the role of Iran in that incident as “baseless.”

“This is the occupying and aggressive Zionist regime which has posed a grave risk to the regional security, stability and tranquility and it should be reprimanded for that,” the Iranian official stressed.

He also called on the international community to take a decisive step against Israel’s occupation as well as its destabilizing acts of aggression, and give a firm response to Tel Aviv’s “warmongering” and “bogus” propaganda campaign.

Over the past years, Israel, which is viewed is a supporter of anti-Damascus militants, has frequently attacked targets in Syria, often claiming that it hit positions or convoys belonging to Iran.

This is while the Islamic Republic says it has no military presence in the Syrian territory, only offering military advisory assistance to the Syrian government fighting terrorists.

Damascus says Israeli raids on Syrian soil are meant to boost the morale of the terror groups, which have been taking heavy blows from the Syrian army and its allied fighters on the battlefield.