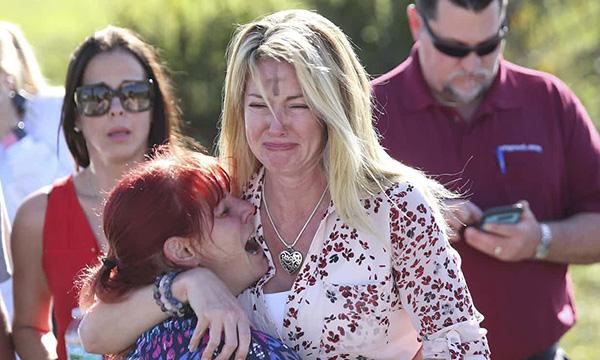 Just seven weeks into 2018, there have been eight shootings at US schools that have resulted in injury or death.

Seventeen people have been confirmed dead in the latest shooting in Parkland, Florida, on Valentine’s Day.

Less than a month ago, a 15-year-old student opened fire at a high school in Kentucky, leaving two students dead and 18 injured. Other incidents have been grave, but on a smaller scale.

In early February, one student in Los Angeles was shot in the head, and another in the arm, when a gun concealed in a fellow student’s backpack went off.

The congressman Bill Nelson, a Democrat of Florida, said on Wednesday afternoon: “Are we coming to expect these mass shootings to be routine? And then after every one we say ‘enough is enough’ and then it continues to happen?”

Congress has refused to tighten restrictions on gun ownership, even after 20 children and six educators were massacred in 2012 in Sandy Hook elementary school in Connecticut.

“We’re lessening the threshold of how crazy someone needs to be to commit a mass shooting,” Austin Eubanks, who survived the 1999 shooting at Columbine high school, told the Guardian last fall.

He was speaking in the wake of catastrophic Las Vegas shooting, where a depressed man took up position high up in a hotel, with a large arsenal of guns and ammunition, and sprayed bullets upon a music concert audience, killing 58 and injuring more than 800. Eubanks said he had watched an increasing pace of mass shootings across the US, in schools and elsewhere, with fear and anxiety.

The fifth anniversary of the Sandy Hook elementary school shooting last December passed in subdued fashion, with congressional Republicans refusing to pass new gun control laws and instead pushing for a law that would weaken gun restrictions nationwide and make it easier to carry a concealed weapon across state lines. Donald Trump won the White House campaigning on a promise to support the National Rifle Association (NRA), the influential gun rights group, and oppose any limits to Americans’ right to own guns.

Why is the National Rifle Association so powerful?

The repeated tragedies and frightening incidents continue to spark deeply divided political responses, with some Americans urging tighter laws on gun sales and ownership and others advocating for putting more armed guards in schools, or making it easier for teachers and parents to carry their own concealed weapons.
Experts caution that the toll of gun violence on children and teenagers falls heaviest outside of schools. Youngsters are much more likely to be shot in their own homes or neighborhoods than at school, according to research by the school safety expert Dewey Cornell.

But the emotional impact of school shootings has sparked a booming school safety industry. In 2017, the market for security equipment in the education sector was estimated at $2.68bn, according to industry analysts at IHS Markit. Some companies have capitalized on parents’ fears by selling bulletproof backpacks or whiteboards, as well as offering ways to fortify school buildings themselves against attack.

While refusing to pass substantive gun control restrictions, Congress has approved hundreds of millions of dollars in federal spending to help put police officers in public schools, including $45m in 2013, the year after the Sandy Hook elementary school shooting.

Some gun rights advocates have pushed to expand gun-carrying in schools further. Andrew McDaniel, a state legislator in Missouri who introduced legislation last year to make it easier to carry guns in schools, told the Guardian that, in rural schools where it might take 20 or 30 minutes for law enforcement to respond to a school shooting in progress, it made sense to have other armed citizens ready to step in.