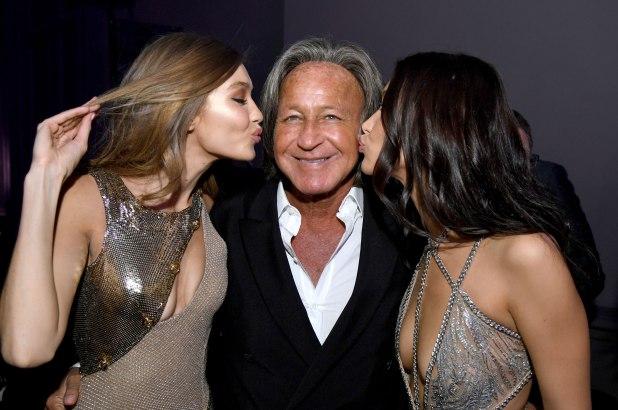 Marciano allegedly introduced Vee (nee Miranda Vazquez) to Mohamed. She told us that she had felt safe going into a meeting with the father of Bella, 21, and Gigi, 22.

“I thought this is a father who must be respectful.”

Vee claims she met Mohamed — who strongly denies sexually assaulting or raping her — at an apartment on North Crescent in LA in March 2017, but when she arrived, “He had two glasses of champagne out. I sat on a couch facing him across the table. He said, ‘Oh you’re so far, why don’t you sit closer?’ ”

She said she moved to sit at his side, and, “We were talking about my career, and he was talking about his daughters. Mohamed said he was headed to the airport to pick Gigi up, and that he was going to Paris with her.” Vee claims he added, “‘Maybe I can take you with me?’ Then he started touching me, touching my leg and my face and he said I looked very pretty . . . and very young.”

Vee claims she started to feel woozy from the champagne, “We were drinking . . . then he was eventually behind me in the bedroom.”

She claims they had unprotected sex, even though, “I told him no.” Once the intercourse ended, she claims Hadid immediately left.

They later exchanged texts, but she never saw him again, she added.

We’re told by other sources that Hadid allegedly “approaches young models over Instagram, sending them direct messages,” introducing himself as “the father of Gigi and Bella.”

According to one 2016 private Instagram conversation seen by Page Six, allegedly between Mohamed and another model who asked not to be named, Mohamed introduced himself with a profile picture of Gigi, and wrote, “I am the father of Gigi and Bella Hadid,” plus “You are the perfect example of a woman’s body.”

He left his personal phone number; it is not known if they met up.

Vee first made her claims against Mohamed and Marciano on Instagram on Feb. 1 in response to a post by Kate Upton. In her initial post, she accused Mohamed of “date raping me.” She has hired prominent attorney Lisa Bloom and filed a police report Tuesday in LA alleging that both Mohamed and Marciano sexually assaulted her.

Bloom confirmed to us, “She filed a police report alleging sexual assault against both [Marciano and Mohamed at] the LAPD headquarters in downtown Los Angeles.” Bloom says Vee’s initial claim of rape against Mohamed changed to sexual assault, saying it was an “umbrella term” she uses to include “all types of non-consensual sexual misconduct. Miranda used her own words.”

Bloom added, “I interviewed Miranda several times, and I found her to be credible based on her demeanor and the way she tells her story. She also has some documentation to corroborate her claims. Unfortunately, she also appears to have received some bad advice . . . but she was 22 when those incidents occurred, so I understand. I’m glad she came to me.”

At Anna Sui’s show on Monday, he told The Post of Vee’s claim, “It’s dead. The story is gone, so it’s just a false accusation. I feel they are right [about #MeToo] and they should change the culture of any industry. I have four daughters, so I am very respectful toward women and I understand all this, but at the same time there are a lot of false accusations that are damaging to certain people. In general, I think that women should stand up and speak out.”

“I’m not here to hurt anyone,” Mohamed said. “It’s a false accusation. What do I get out of it? I don’t think I can pursue it for financial gains. My name definitely will clear up. I have kids and I have grandkids and I want to make sure that they know that these are all false accusations.”

He added, “I’m not in the business of modeling. I’m not in the industry. I don’t have anyone [models] to hire — ladies — so that’s why I’m very upset with it. She [Vee] kind of followed the #MeToo movement for a case that did not exist.”

Mohamed previously told TMZ of Vee’s claims, “When we met it was not a date, and not once did I touch her,” adding that he would sue for defamation.

‘Spider-Man’ and other Sony films to hit Netflix after theaters