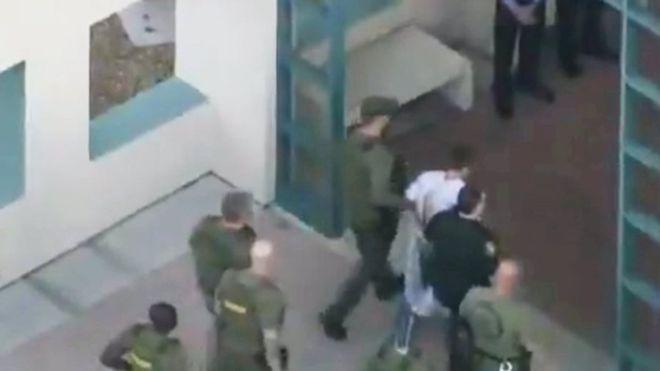 A picture is building of the suspect in a mass shooting at a high school in Parkland, Florida that left at least 17 people dead.

Nikolas Cruz, 19, was detained in the nearby city of Coral Springs. He was then treated in hospital and taken into police custody.

Police say Mr Cruz is a former student who was expelled from the school for disciplinary reasons.

A number of people from the school have spoken of his behavioural issues, which include making threats to other students.

One student told a local TV station that “everyone predicted” the shooting and had joked that Cruz would be “the one to shoot up the school”.

Chad Williams, 18, told Reuters news agency that Mr Cruz was “crazy about guns” and would regularly set off the fire alarm before he was eventually expelled.

“He was kind of an outcast. He didn’t have many friends,” he said.

Maths teacher Jim Gard echoed the view that Mr Cruz had a reputation for bad behaviour.

“There were problems with him last year threatening students, and I guess he was asked to leave campus,” he told the Miami Herald.

He added that the school had sent out an email warning teachers about Mr Cruz’s threats.

“Everything he posts is about weapons. It’s sick,” he said.

These images have begun circulating on social media and are apparently taken from two separate Instagram accounts belonging to Mr Cruz.

The accounts, which have since been deleted, include a number of images of knives and guns.

One picture shows a box of ammunition and another shows numerous rifles spread on a bed.

In several images a masked man is shown holding up large knives to the camera.

“We’ve already began to dissect his websites and the social media he was on and some of the things that have come to mind are very, very disturbing,” he said.

But despite multiple accounts of Mr Cruz’s threatening behaviour, officials say there had been no indication that the shooting would happen.

“We didn’t have any warnings, there weren’t any phone calls or threats that we know of, that were made,” Robert Runcie, Broward superintendent of schools, told reporters.