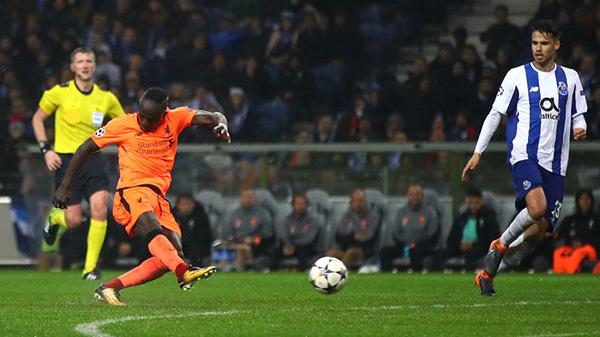 Andy Hunter at Estádio do Dragão

How Liverpool’s forward line would prosper without Philippe Coutinho remained a legitimate question on their return to the Champions League stage. By taking turns to inflict the heaviest home defeat in Porto’s rich European history was the emphatic answer. The highest-scoring team in the competition will be one to avoid in the quarter-finals that follow this complete away display.

Sadio Mané announced his return to form with a hat-trick, Roberto Firmino polished an immaculate display with another and Mohamed Salah claimed his 30th of the season as Jürgen Klopp’s side demolished the Portuguese league leaders. The Egyptian became the second-fastest player in Liverpool’s history to reach the 30-goal milestone. Only George Allan, in 1896, got there quicker than his 36 games. The visitors also became the second-highest goalscorers away from home in any Champions League campaign as Porto were steam-rollered.

It was a performance built on confident defending – Liverpool kept a third consecutive away clean sheet for only the second time in seven years – industrious and creative midfield play embodied by James Milner, who now leads the way for assists in this season’s Champions League, and of course a devastating attack.

It was Liverpool’s third away victory in Portugal. The previous two, against Benfica in 1978 and 1984, constituted parts of European Cup-winning campaigns at Anfield. Klopp will not be enthused by such omens; he claimed here that this last-16 tie is not over, but he will be emboldened by the threat his team pose even after January’s unwanted dealing with Barcelona.

The rout followed a balanced opening in which Porto impressed with Yacine Brahimi and Otávio down the flanks while Moussa Marega’s surging runs caused problems. Not that Liverpool’s defence was unduly disturbed. On that solid foundation another of the goalscoring bursts that have become a trademark of this campaign put the five-times winners en route to the quarter-finals before half-time. Porto’s quality in possession was undeniable but so was their mental fragility once the tie turned against them. It required only a sliced clearance from the goalkeeper, José Sá, one that gave Salah his first opening of the game, for home players to begin castigating each other and lose their composure. Liverpool took full advantage.

Mané altered the mood with his first goal in six matches. It was a scrappy effort that will cause José Sá sleepless nights but the 3,200 Liverpool fans tucked away in the upper reaches of the rain-swept stadium cared not a jot. The Senegal international combined with Firmino and made the wrong decision to look for Salah inside the area – understandably enough given his prowess in front of goal – when Georginio Wijnaldum was unmarked at the back post. Porto were unable to clear their lines, however, and Wijnaldum regained possession before driving into the penalty area. The ball fell to Mané on the left and his low shot squirmed under the Porto keeper and trickled over the line. José Sá beat the floor in justifiable rage.

The second followed three minutes later and brought up Salah’s 30th goal of a truly stunning debut season as a Liverpool player. It also maintained the team’s European tradition this season of blitzing their opponents when they are down.

Milner orchestrated the goal when he beat Marega in the challenge and beat José Sá with a curling effort that crashed against the far post. The rebound dropped to Salah who showed what supreme confidence does to a player by controlling the ball on his chest, flicking it over the keeper and taking another touch with his head before sliding home. The Egypt international stood statuesque for the acclaim that accompanied his latest milestone and Liverpool’s latest rapid-fire display in the Champions League. Against Hoffenheim in the play-off they scored three in an 11-minute spell. There were also three goals in 15 minutes away to Maribor and three in a blistering 14-minute rampage against Spartak Moscow at Anfield. Three goals in 28 minutes away to Sevilla looks almost lackadaisical by comparison.Their third in Portugal put pay to any hope that Sérgio Conceição’s side had of hauling themselves back into the game or the tie. Francisco Soares was a fraction wide of scoring on the stroke of half-time and, in their efforts to attack the deficit after the interval, Porto were punished by a clinical counterattack involving all three of Liverpool’s mesmerising forwards. Salah played provider with an exquisite pass that released Firmino through the heart of the home defence. The Brazilian aimed low to José Sá’s right and, though the keeper pushed clear, Mané was on hand to score his second of the game with ease.

Liverpool’s fourth, and the cue for many home fans to head for the exits, was deserved reward for Firmino’s relentless teamwork. The Italian referee, Daniele Orsato, played a good advantage when Mané had his shirt pulled by the substitute Jesús Corona and allowed the striker to release Milner on the left. The midfielder pulled back an intelligent cross into the heart of the penalty area and there was Firmino to sidefoot his eighth goal of the campaign into the bottom corner.

That was Milner’s sixth assist of the season and Mané’s hat-trick arrived in style when he swept the ball beyond José Sá from 25 yards late on. Liverpool roll on imperiously without Coutinho.