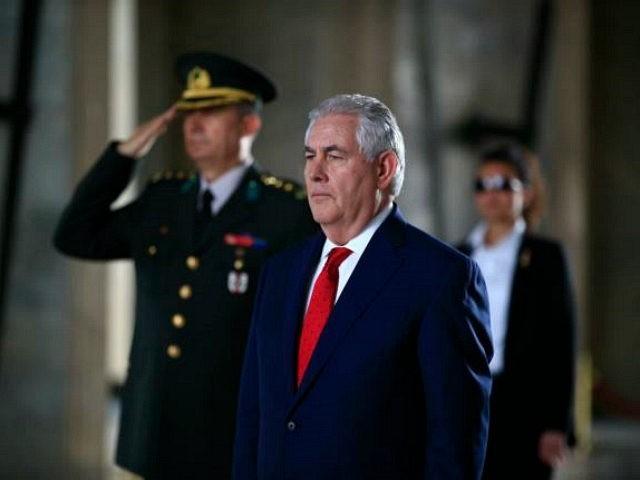 “Those who want to cooperate with us should be sensitive about a political solution and what is more important, they should stop supporting terrorist organizations that aim to divide Syria,” Çavuşoğlu said in Kuwait City at a donor’s conference for the reconstruction of Syria, apparently referring to the U.S.

Tillerson, for his side, said in Amman on Feb. 14 that “with respect to my meetings in Ankara, Turkey is still an important NATO ally of the United States … We need to find a way to continue to work in the same direction. We are committed to the same outcomes in Syria.”

The State Secretary is set to arrive in Ankara on Feb. 16 and meet with President Recep Tayyip Erdoğan and Çavuşoğlu. The Ankara visit will mark the end of his five-nation tour in the region, after stops in Egypt, Kuwait, Jordan and Lebanon.

Tensions have risen between Turkey and the U.S. over Washington’s support for the People’s Protection Units (YPG), which Ankara sees as an offshoot of the outlawed Kurdistan Worker’s Party (PKK).

The dispute has come to a head over the Syrian town of Manbij, where Turkey has vowed to drive out a YPG-led force, warning the U.S. – which has troops stationed there – not to get in the way.

Turkey will turn its attention to Manbij, which lies approximately 100 kilometers east of Afrin, “as soon as possible,” the Turkish government has said. But Washington says it has no plans to withdraw its soldiers from Manbij, and two U.S. commanders visited the town last week to reinforce that message.

At the meeting in Kuwait on Feb. 13, Tillerson made a point of noting concerns about the situation, and urged “all parties to remain focused on defeating ISIS, de-escalating and resolving the Syrian conflict and protecting innocent civilians.” The ISIS is another acronym for the Islamic State of Iraq and the Levant (ISIL).

“We are keenly aware of the legitimate security concerns of Turkey, our coalition partner and NATO ally. We will continue to be completely transparent with Turkey about our efforts in Syria to defeat ISIS, and we stand by our NATO ally in its counterterrorism efforts,” he also said, using another acronym for the Islamic State of Iraq and the Levant (ISIL).

For Turkey, the dispute has pushed relations with the U.S. to breaking point.

“We will discuss these issues during Tillerson’s visit, and our ties have reached a very critical stage,” Çavuşoğlu said on Feb. 12.

“Either we improve our ties, or they will deteriorate completely,” he said.

In addition to the Syria issue, Ankara has put pressure on Washington to extradite Pennsylvania-based Fethullah Gülen, whom Ankara accuses of masterminding a 2016 coup attempt.

The U.S. conviction of an executive from Turkey’s Halkbank, Hakan Atilla, for helping Iran evade U.S. sanctions provides yet another cause for a split.

On the part of the U.S, Washington demands the release of American Christian missionary Andrew Brunson, who ran a small church in Izmir on Turkey’s western coast and also seeks assurances for its consulate staff in Turkey following the detention of two employees last year.