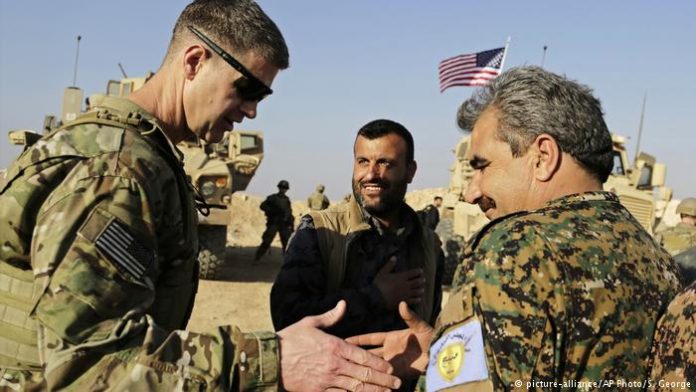 The war in Syria has escalated Washington-Ankara tension. But ahead of Secretary of State Rex Tillerson’s visit this week, former US Ambassador to Turkey Ross Wilson told DW he’s hopeful cooler heads will prevail.

DW: Turkey’s incursion into northern Syria has further strained the already tense ties between Ankara and Washington. Do you fear that this latest development might lead to an armed confrontation between US and Turkish soldiers in the region?

Ross Wilson: Obviously the war of words has grown dramatic. Anger in Ankara over what Turkish officials regard and see as broken American promises, anger in the Pentagon especially over what they regard as excessive reactions on the Turkish side… This is not leading in a good direction. Having said that, I think the prospects of an armed confrontation are low. Cooler heads, particularly cooler military heads, I think will prevail.

Turkey says that US support for the Kurdish Peoples Protection Units (YPG) and the Kurdish Democratic Union Party (PYD) in northern Syria is in fact strengthening the Kurdistan Workers’ Party (PKK) and risking the formation of an autonomous region along Turkey’s border controlled by the PKK. Is the US actively pursuing a policy that will help to form a Kurdish autonomous region in northern Syria that would be controlled by the PKK, a group Washington and Ankara both consider a terrorist organization?

If you read what [US Secretary of State Rex] Tillerson said in a speech he gave at the Hoover Institution, he seemed, I thought, pretty clearly not to suggest that the US is in favor of a Kurdish autonomous region or a Kurdish independent region in northern Syria… He talked about Syria’s unity… And I thought that was important. In practice what the US military has been engaged in in Syria has been support of Kurdish aspirations or particularly the PYD’s political and military aspirations in northern Syria. And that is a significant problem.

I don’t think it’s our military’s intention to create an independent Kurdish state. Their focus has been fighting against ISIL (the “Islamic State”) and I think now in securing the border from the leakage of former ISİL fighters out of Syria, which in general is probably a good thing including for Turkey. But the means that they have used to go about it have, I think, ended up being counterproductive to what it was that Secretary Tillerson spoke out about just a number of days ago.

Can the US and Turkey find a way to de-escalate the tension?

I assume that that’s going to be one of the objectives Secretary Tillerson has when he is in Ankara … My own view is that the way forward has got to involve some combination of things. One is a little bit more realism in Washington about what’s possible in Syria, including with respect to the resources that the US is prepared to bring to bear to transform the situation there. The most likely scenario is that [Syrian President Bashar al-] Assad is going to remain in power and will regain control over most the country.

By the same token it’s very clear that the Syrian Kurds are emerging from the last two to three years’ fight against ISIL considerably strengthened, and will play a different kind of role in whatever sort of Syria emerges now over the course of the next year or two … They are not going to go anywhere. And that’s a fact that Turkey is not really in a position to prevent, unless Turkey is prepared to take over the whole of northern Syria, which isn’t realistic. And at the same time Turkey does have a legitimate security problem with respect to the PKK. I have been one that has long thought that the PYD is more or less the same thing. In any case it’s a subsidiary or an ally of the PKK at a minimum. And the way forward needs to deal with those three realities.

We are witnessing a growing rift between the two countries, who are NATO allies. Many Turks suspect that the 2016 coup attempt was backed by Washington. Several US consulate employees are still under arrest and US politicians are voicing concerns over President Recep Tayyip Erdogan’s authoritarian rule.

Bilateral tensions and deep concerns about the domestic developments in Turkey are important impediments. But Syria is the most important issue. If the US and Turkey can find a reasonably cohesive way forward with respect to Syria, the other problems are more or less manageable, they have been managed for the last couple of years. It is extremely important and good that Secretary Tillerson has included Turkey on his mission to the region, it’s good that National Security Advisor [H.R.] McMaster took the time to visit Turkey. A frank exchange of views is important. Tillerson’s visit can offer an opportunity to try to reset things if cool-headedness would prevail.

Following McMaster’s recent trip to Ankara, both sides reaffirmed their long-term strategic partnership. But can you still describe this relationship as a strategic one?

Turkey remains a member of NATO and that makes it an important strategic partner for the US by definition. Turkey is an extremely important asset for the US in a very, very difficult part of the world. By the same token, the US connection and the alliance connection is extremely important for Turkey — a huge asset that gives Turkey a kind of importance in the region. It’s profoundly in the interest of both countries to keep that alliance intact, even while we sort out some tough issues … It’s clearly a less friendly relationship than it used to be but it’s extremely important to both Washington and to Ankara.