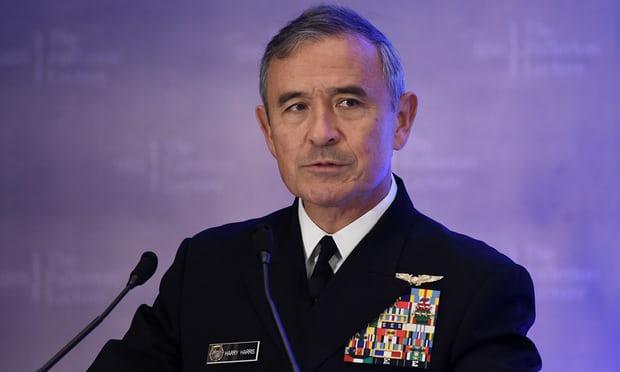 Harry Harris, the next US ambassador to Australia, says Beijing intends to control South China Sea

The navy admiral nominated to be the next US ambassador to Australia has told Congress America must prepare for the possibility of war with China, and said it would rely on Australia to help uphold the international rules-based system in the Asia-Pacific.

In an excoriating assessment of China’s increasingly muscular posture in the region, Harry Harris said Beijing’s “intent is crystal clear” to dominate the South China Sea and that its military might could soon rival American power “across almost every domain”.

Harris, soon to retire as the head of US Pacific Command in Hawaii, told the House armed services committee, the US and its allies should be wary of Beijing’s military expansionism in the region, and condemned China’s foreign influence operations, predatory economic behaviour and coercion of regional neighbours.

“China’s intent is crystal clear. We ignore it at our peril,” he said. “I’m concerned China will now work to undermine the international rules-based order.”

Harris praised Australia as one of America’s staunchest allies in the Asia-Pacific region, noting existing military cooperation at air force bases in the Northern Territory, joint naval exercises and the regular rotation of 1,500 marines through Darwin.

“Australia is one of the keys to a rules-based international order,” Harris said. “I look to my Australian counterparts for their assistance, I admire their leadership in the battlefield and in the corridors of power in the world.

“They are a key ally of the United States and they have been with us in every major conflict since world war one.”

Harris, the Yokosuka-born son of an American naval officer and a Japanese mother, has been nominated by President Donald Trump as the next ambassador to Australia. His appointment must be confirmed by the Senate.

Australia has been without a US ambassador since John Berry departed in September 2016.

Harris said he was alarmed by China’s construction of military bases on seven disputed islands in the South China Sea that neighbouring countries lay territorial claims to.

In 2016, the permanent court of arbitration in The Hague, sided with the Philippines in the dispute it brought, saying there was no legal basis for China’s claim of historic sovereignty over waters within the so-called nine-dash line in the sea.

Regardless, Chinese military build-up continues in the sea.

In a separate answer, he said of the risk of conflict with China: “as far as the idea of deterrence and winning wars, I’m a military guy. And I think it’s important you must plan and resource to win a war at the same time you work to prevent it.”

“At the end of the day the ability to wage war is important or you become a paper tiger. I’m hopeful that it won’t come to a conflict with China, but we must all be prepared for that if it should come to that.”

Should Harris be confirmed as the next ambassador to Australia, his hawkish position would present a challenge for Canberra, as it seeks to navigate an increasingly delicate diplomatic and economic relationship with Beijing.

Ties were severely strained last year after a backlash against China’s perceived influence on and infiltration of Australia’s political system, highlighted by the resignation of Labor senator Sam Dastyari over accepting cash from Chinese businessmen for private debts and his position, at odds with his party, on the South China Sea. The Australian government has proposed new espionage laws and tightening of rules around foreign donations to political parties.

China is Australia’s largest trading partner, but the US is its primary defence and security ally, and Australia has been a vocal defender of the US alliance network over issues such as the nuclear weapons ban treaty, which the US opposes.

The Australian prime minister, Malcolm Turnbull, who has previously met Harris in Hawaii, has publicly welcomed his nomination. “Great to see Admiral Harry Harris nominated by [Donald Trump] as US ambassador to Australia. Look forward to seeing you in Canberra, Harry,” Turnbull said on Twitter on February 10.

Turnbull will meet with Trump in Washington next week. It is not known when Harris’s confirmation hearing will take place.