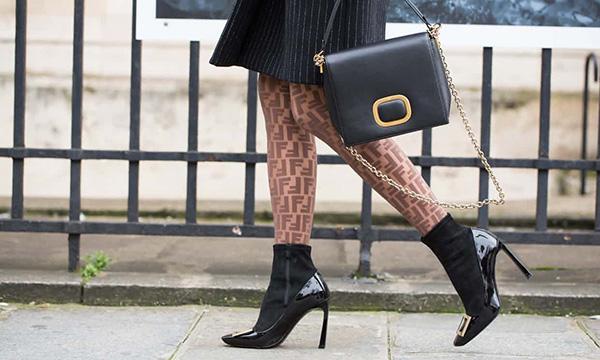 Heels were once de rigueur, but most women have grown wise to their sciatica-inducing folly – except, that is, for fashion editors

I see London fashion week is about to start again. What strange sights can we expect to see?
John, London

Heels. High heels, John, and lots of ’em. What, on the runway? I don’t know, maybe? How would I know what will be on the runways? This ain’t Mystic Meg, bucko. No, I meant on the pavement.

Brace yourself, John and other Londoners, for packs of fashion editors clomping around central London in their towering heels, urgently shouting into their phones about where the hell is that Uber driver, the Burberry show started 10 minutes ago?!

London ought to brace itself for how odd a sight this will be, rather like a pride of exotic antelopes swooping down the Strand. For sure, London is used to rude people, and to fashion week, but I think it has grown distinctly unused to women in high heels. Because, with the exception of fashion editors and people on reality TV shows, women just don’t wear high heels any more.

This has been a huge change over the past two decades, possibly the biggest fashion change of all. I remember riding the tube to Farringdon Road on my first day of work, looking at all the people around me reading their newspapers, the women balancing themselves carefully on their high-heeled shoes, and thinking: “Freeman, you’ve made it now! You’re literally Working Girl – watch out, Harrison Ford!” (Spoiler alert: Harrison Ford did not need to watch out.)

The first confirmation of this shift came in 2016 when it was confirmed that women were buying more trainers than heels. But really, you only needed to look around to see this. I can’t remember the last time I read an interview with a female celebrity in which she is described as wearing any kind of footwear other than “a pair of chic flats”. When I did a straw poll among my friends (only the finest of scientific and journalistic methods for this column, folks) about how many pairs of heels they own, they all, to a woman, replied: “A couple, but I never wear them.” In fact, the only time I see women in high heels is when I watch TV dramas about rich Russians, or when Melania Trump visits some homeless people. Heels just feel hopelessly dated now.

There are various fashion reasons for this shift: the rise of what is cringingly called “athleisure”, the similar rise of Silicon Valley, with its bafflingly influential normcore style. But I suspect the real reason is that high heels are socially sanctioned torture instruments and women just don’t have time for this nonsense any more. We just got too many fish to fry these days.

Here is the place where I have to say, by the law of feminism, that, yes, some women genuinely love high heels, and, yes, some women find that standing on their tiptoes all day gives them a real sense of power (and bunions) and yadda yadda yadda. And good for those women! Heck, someone has to keep Christian Louboutin in business.

So, why do fashion editors stick with them, you cry? Surely they should be at the cutting edge of this exciting trend of not causing oneself pain every time one tries to walk. Well, fashion editors write about fashion, but don’t actually wear it. Trends are for the little people, you see. They, on the other hand, have what is called “a signature style”, which means they wear the same thing all the time, which means Chanel, black and heels.

So, prepare yourself, London, because you’re in for quite a sight. And cover your children’s eyes because otherwise they will point and scream at this inexplicable sight: “Mummy! Daddy! Why are those women walking on NEEDLES?!” “Because of patriarchy, my darling. Because of patriarchy.”