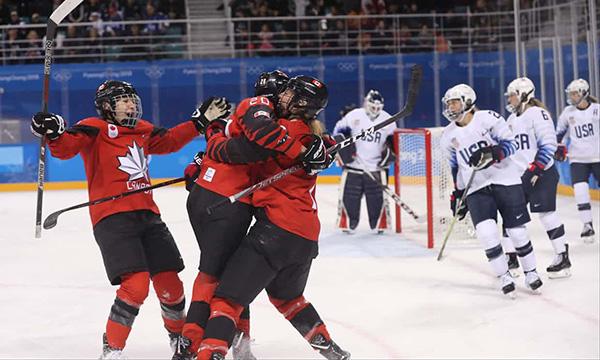 The US women have no problem getting chances when they play the Canadians. At the moment they just can’t seem to get them into the net.

The American women’s scoring dilemma against their arch-rivals was never more evident than in Thursday’s preliminary round matchup between the only two women’s ice hockey teams ever to win an Olympic gold medal. Team USA, who hit the post at least three times and missed a penalty shot, outshot Canada 45-23 but came away with a 2-1 loss.

Both teams advance to the semi-finals, where Canada will face either Switzerland or the Olympic Athletes from Russia. Team USA will play either Sweden or Finland.

“We gotta bury our chances,” said US forward Jocelyne Lamoureux-Davidson, who set an Olympic record on Tuesday for the shortest span between goals by the same player – six seconds – against the Olympic Athletes of Russia.

“We had a lot of shots on net and had a lot of opportunities, I think, to get some loose pucks in the net on scrums, and we just were a few inches off on a lot of them.  So we just gotta find a way to get those hard-nosed goals.”

Emblematic of their scoring travails, Lamoureux-Davidson failed to convert a penalty shot late in the second period.  After getting Canadian goalkeeper Genevieve LaCasse down to her knees, leaving an opening to the net on her stick side, Lamoureux-Davidson lifted a backhander that rose over the cross bar. “I got her to drop and then I caught the knob of her stick,” she said.

The US have now dropped five straight matches to the Canadians, getting outscored 11-4 in that span despite outshooting them 166-132.

While his players are clearly frustrated, coach Robb Stauber felt his team will soon start scoring more. “When you do those little things right, when the seal breaks, it’s going to break open and we believe that if we stick to the process of outshooting teams two-to-one, it’s not a matter of is it going to happen, it’s a matter of when,” Stauber said.