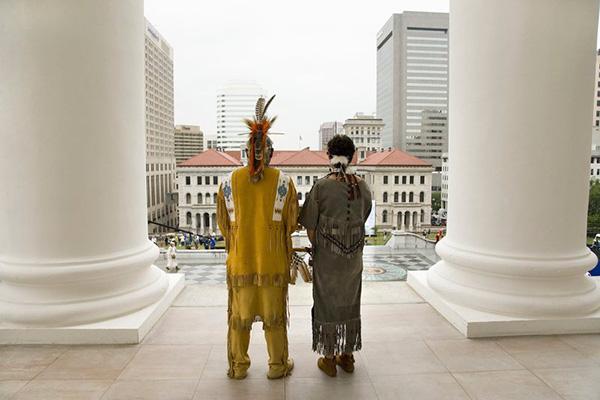 For a Native American tribe, federal recognition comes with a host of benefits, including housing, health and education funding. But the process of achieving that recognition from the Bureau of Indian Affairs (BIA) can be difficult — particularly because the BIA requires tribes to demonstrate continuous existence as an Indian entity from colonial times to the present. That’s a standard that, as recent news shows, doesn’t match up with the reality of American history.

On Jan. 30, President Trump signed H.R. 984, the Thomasina E. Jordan Indian Tribes of Virginia Federal Recognition Act of 2017, which granted federal recognition to six Virginia state-recognized Native American tribes via a special act of Congress rather than through the usual BIA process. The recognition means that members of the six tribes have achieved sovereign (albeit limited) status. Virginia Senators Tim Kaine and Mark Warner hailed the bill as having “righted a historical wrong.”

Yet the story of federal recognition for those six tribes—the Chickahominy, the Eastern Chickahominy, the Upper Mattaponi, the Rappahannock, the Monacan, and the Nansemond—also shows that at least one particular “historical wrong” remains unaddressed. In fact, their story illuminates a central problem with the way Indian recognition is managed on the state and federal level, as it is based on a problematic idea of racial purity.

The history behind that idea — that racial purity specifically requires the demonstrable absence of African-American ancestry — goes back to none other than Thomas Jefferson. His blood politics became the cornerstone of Virginia (and later federal) Indian policy, which poisoned Black-Indian relations and divided the families of those who struggled to maintain an Indian identity by seeking formal recognition.

As I demonstrate in my book That the Blood Stay Pure: African Americans, Native Americans and the Predicament of Race and Identity in Virginia interracial intimacy between people of African descent and American Indians dates back to the early colonial era in Virginia. The Virginia General Assembly enacted its first proscriptions against interracial marriage in 1691, but this law only applied to intimacies between whites and non-whites. And, as noted by Jack D. Forbes in his book Africans and Native Americans: The Language of Race and the Evolution of Red-Black Peoples, by the end of the colonial period, enslaved Indians were classified as Negro along with their black enslaved counterparts.

By the late 18th century, in adherence with the idea that “one drop” of African blood defined a person as black, white settlers advocated for the state to stop recognizing Indian identity (and tribal land ownership) on the idea that the Native American identity had been lost due to intimacy with black Virginians. To wit, free Native Americans were classified on the census not as Indian but as free people of color or mulattoes.

By the end of the 19th century, the remnants of the state’s Powhatan people began to push back against the state-sanctioned reclassification of their identity with a dogged resolve. In order to do so, they embraced an identity not based on who they were, but rather on who they were not: black.

While complicated definitions of racial categories were not unique to Virginia, the state’s residents had another factor to deal with. Among the state’s most elite families were many that claimed descent from John Rolfe and Pocahontas. They were proud of their Native American heritage, but they were also adamant that they were white, and had to reconcile that idea with the widespread desire among the Virginia elite for the Commonwealth to be the nation’s leading example of racial purity. So when the state enacted its Racial Integrity Act in 1924, it defined whiteness using the “Pocahontas Exception,” which spared those families from being forced to identify as colored, and thus subjected to Jim Crow.

In the same period, the Virginia Indians found a steadfast ally in anthropologist Frank Speck of the University of Pennsylvania. Speck spent three decades among the Powhatan Tribes and became a fierce advocate for their formal recognition. In his monographs about the Powhatan Tribes, he significantly downplayed the historical kinship ties between blacks and Indians. In this view, these tribes were distinct from other Indian tribes and the state’s black population, because they had only intermarried with whites for nearly two centuries. Hence, Speck certified that the Powhatan Indians were racially pure.

During the 1930s and ‘40s, Speck lobbied the Federal Census Bureau to classify members of the Powhatan Tribes as Indian, despite Plecker’s strong opposition. The 1940 battle was a draw, as the bureau decided that the designation would be permitted, but with an asterisk to indicate racial uncertainly. Also at this time, prominent citizens began lobbying state and federal officials with petitions that certified that the Powhatan Tribes were of white-Indian only ancestry.

The resistance continued during World War II as three Caroline County residents were jailed for refusing to enlist in the Military as colored. One draftee of the Rappahannock Tribe expressed that he would rather go to jail than “go down in history as a negro.” Resistance to the “colored” classification also affected Powhatan Indian education; Indian schools only went to eighth grade. Because Virginia Indian children could not attend white schools and Powhatan parents refused to send them to colored schools, many Powhatan children did not attend high school. (Others, after Speck’s lobbying, completed high school at Federal Indian residential schools in North Carolina, Kansas and Oklahoma).

Even after Virginia’s schools were “integrated” after the Brown Supreme Court decision, the fallout from Speck’s campaign continued.

First, during the 1980s the Virginia Council on Indians (VCI) was established and eight tribes, seven of which were descendants of the former Powhatan Confederacy, received state recognition by a special act of the Virginia General Assembly. Second, tribal leaders and their anthropologist advocate Helen Rountree were appointed to the council to oversee Indian Affairs throughout the Commonwealth and to make recommendations to the VGA for tribes seeking state recognition. Third, in 1998, six of the eight state-recognized tribes began their efforts toward seeking federal recognition.

Yet, by 1990, the VCI established state recognition criteria based on the same BIA criteria for which tribal leaders sought and have now received exemption: the idea of continuous existence as a purely Indian entity. Hence, once the standard was adopted, the VCI did not grant a single Virginia Tribe a favorable recommendation for state recognition.

Even after last week’s historic signing, Plecker’s and Speck’s legacies are alive and well, in the idea that intimacy with blacks invalidates Indian identity. Broken friendships, disrupted kinship relations, and deep-seated animosities testify to the damage wrought by these men. Yet, as Lynette Allston, Chief of the Nottoway Tribe, told me just prior to submitting the tribe’s petition for state recognition, ”We are Indian people of white and black ancestry, and we won’t deny any part of who we are.”

Historians explain how the past informs the present