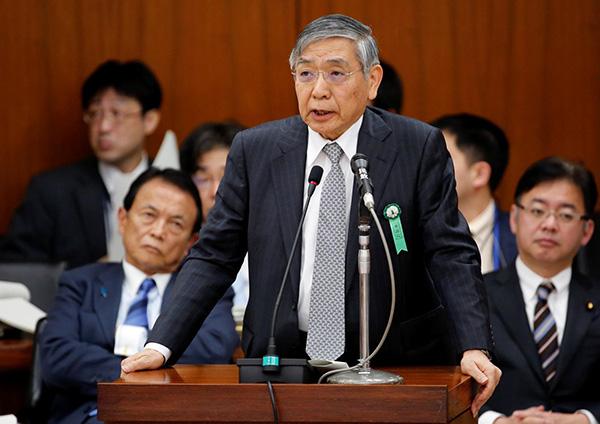 TOKYO (Reuters) – Japan’s government on Friday reappointed Bank of Japan Governor Haruhiko Kuroda for another term and chose an advocate of bolder monetary easing as one of his deputies, a sign the central bank will be in no rush to dial back its massive stimulus program.

The selection of the new BOJ leadership comes at a crucial time for Japanese and global markets, which have been rattled in recent weeks on expectations major central banks will whittle down their crisis-mode stimulus.

In a widely expected move, the government nominated Kuroda to serve another five-year term when the current one ends in April, a sign of premier Shinzo Abe’s confidence over the governor’s efforts to pull Japan’s economy out of stagnation.

The government also submitted to parliament its nomination of Masazumi Wakatabe, a professor at Waseda University and an advocate of aggressive monetary easing, as deputy governor.

The choice of Wakatabe, a professor at Waseda University, could complicate Kuroda’s task of engineering a slow but steady exit from the BOJ’s radical monetary stimulus.

But it could help the BOJ dispel market speculation it may dial back stimulus earlier than expected, and allow it to shift gear back toward more easing if continued yen rises threaten Japan’s economic recovery, some analysts say.

While Kuroda has pledged to maintain the BOJ’s ultra-easy policy, he has refuted arguments that the stimulus program needs to be expanded and has signaled the possibility of raising interest rates if inflation prospects brighten.

The nominations need approval by both houses of parliament, which is a near certainty as Abe’s ruling coalition has a comfortable majority.

WAKATABE WOULD JOIN A SPLIT BOARD

Analysts say Amamiya, who has worked closely with Kuroda as an expert of monetary policy, is unlikely to rock the boat.

Wakatabe would join a board divided between those who favor maintaining or even ramping up the BOJ’s huge monetary support, and those who want to eventually turn off the money spigot given the rising cost of prolonged easing.

With the cost of prolonged easing rising, many analysts expect the BOJ’s next move to be to withdraw its massive stimulus program. But recent yen rises have emerged as a new headache for BOJ policymakers as they worried about the damage to Japan’s export-reliant economy.

The yen’s ascent to 15-month highs has triggered verbal intervention from policymakers including Finance Minister Taro Aso, who said he would “respond appropriately” to currency fluctuations.

In an interview with the Nikkei last November, Wakatabe said the BOJ needs stronger measures to beat deflation and should accelerate its asset purchases.

That would require reversing a decision made in 2016 to abandon a target for asset purchases and contradict the mainstream approach of many BOJ officials, who believe the bank’s next move should be a withdrawal of stimulus, not an expansion.

Under Kuroda’s direction, the BOJ deployed in 2013 a radical asset-buying program intended to reflate the economy out of deflation and target an inflation rate of 2 percent.

Subdued inflation forced the BOJ to revamp its policy framework in 2016 to one better suited for a long-term battle against deflation, which targets interest rates instead of the pace of money printing.

Wakatabe and Amamiya would replace incumbent deputy governors Kikuo Iwata, an academic, and Hiroshi Nakaso, a career central banker, when their terms end in March.