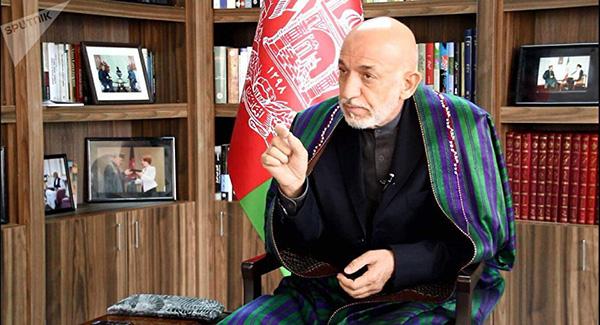 Former Afghan President Hamid Karzai has warned Washington against “deceiving” Kabul, pointing out that his country’s interests should be respected by the White House.

In an interview with the Washington Post, former Afghan President Hamid Karzai specifically focused on relations between Kabul and Washington as well as the US’s military presence in Afghanistan.

“The United States is not here to go to a party. There is no need for them to build so many bases just to defeat a few Taliban. They are here because all the great American rivals are in the neighborhood, and we happen to be here, too,” Karzai emphasized.

He also made it plain that the US military is “welcome to stay but not to deceive us.”

Karzai mentioned “an uncertain future” looming for Afghanistan, which he said is “too small and poor to ask the US to stop.”

“But we are a country, and our interests must be respected,” he underscored.

Last year, it was Karzai who lashed out at the new US strategy for his country, which he said is “against peace and the national interest of Afghanistan.”

In last year’s exclusive interview with Sputnik, Karzai specifically underlined that the US sought to implement “its own goals when it entered Afghanistan.”

“The Americans said from the very beginning that they did not come to help the Afghan people, but rather to ensure their security. Later, we realized that they see Afghanistan only as a tool for implementing their geopolitical plans in the region, and once we realized this, it became clear that we needed to find our own ways of normalizing the situation in the country,” he said.

In August 2017, US President Donald Trump announced the continuation of Washington’s support for Afghan authorities in their fight against Islamic extremists.

Trump explained that the new US strategy for Afghanistan stipulates that the US will not be involved in nation building, but in exterminating terrorists there.

He said that the strategy would be secret and any timetables for ending the war in Afghanistan will be removed. Trump pledged to publicly keep mum regarding US troop numbers or plans for ongoing activities in Afghanistan.

The United States has been in Afghanistan for almost 17 years after the 9/11 attacks on Washington and New York. During his pre-election campaign in 2016, Trump condemned sending US troops and resources to Afghanistan.