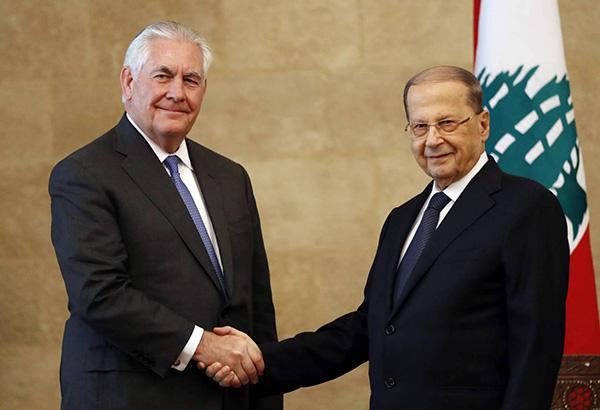 Tillerson, the most senior official from the Trump administration to visit Lebanon, discussed with both President Michel Aoun and Foreign Minister Gebran Bassil the U.S-Lebanon bilateral relations while reiterating support for the country’s state institutions.

BEIRUT: Lebanon’s top officials urged the U.S. to work on preventing Israel from violating Lebanon’s sovereignty during a visit of  U.S. Secretary of State Rex Tillerson to Lebanon Monday.

Tillerson’s visit comes against the backdrop of heightened tensions between Lebanon and Israel over a disputed maritime zone and the construction of an Israeli wall along Lebanon’s southern border.

During his meeting with Tillerson at the Baabda presidential palace, President Michel Aoun invited the U.S and the international community to play a mediating role in order to resolve disputes and put a stop to Israeli incursions.

A statement released by the president’s office said “the U.S and the international community must play an active role in preserving peace along the border,” adding that Lebanon has shown restraint while “Israel continues its aggressive behavior.”

Aoun also discussed with the U.S. official renewed legislation targeting Hezbollah, which the U.S. considers as a terrorist organization. Aoun, a close ally of the Iranian-backed militant group, made it clear that Lebanon has been “abiding by regulations that restrict terrorist money laundering activities,” yet noted that some of these sanctions have hurt Lebanon’s economy, throwing off potential investors.

In the lead up to Lebanon taking part in three international aid conference in Rome, Paris, and Brussels respectively, which seek to bolster support for Lebanon’s different institutions, Aoun called for increased support to deal with the “Syrian refugee crisis that has taken its toll on the economy and society as a whole.”

The Brussels summit, to be held on April 4, will bring together over 70 countries, international organizations and civil society to “reconfirm existing pledges and identify additional support to Syrian inside Syria and in the neighboring countries.” Aoun noted that the U.S. decision to cut its contribution to United Nations Relief and Works Agency from $264 million to $60 million will further impede Lebanon’s ability to weather the refugee crisis.

Touching on Lebanon’s renewed policy of dissociation towards regional conflicts, Aoun assured the Secretary of State that Lebanon is committed to that very policy, yet is “not responsible for any regional conflicts that might influence Lebanon, as this out of our control.”

As Tillerson made his way to the reception hall at the Baabda Presidential Palace, he was made to wait a few minutes as the live broadcast captured him sitting alone before being greeted by Aoun.

The unconventional incident prompted the president’s office to issue a statement clarifying that all protocols were followed during the top U.S. official’s visit.

Following the meeting, the Secretary of State penned a note in the visitors’ book, thanking Aoun for the warm welcome and vowing to “stand with the Lebanese people for a free and democratic Lebanon.”

Speaking at a press conference following his meeting with Prime Minister Saad Hariri at the Grand Serail, Tillerson underscored the U.S. commitment to supporting Lebanon, saying that “the U.S stands firmly by the side of Lebanon’s legitimate institutions.”

Tillerson also highlighted the importance of reaching a diplomatic solution with Israel over the disputed maritime zone, as “the extraction of natural resources will further drive Lebanon down the path of prosperity.”

The Secretary of State also confirmed the U.S.’s continued support for the Lebanese Army and Internal Security Forces, yet maintained that his country considers both the political and military wing of Hezbollah as terrorist organizations.

“Hezbollah’s actions, its growing arsenal, bring unwanted and unhelpful scrutiny on Lebanon,” he said, before noting that the only legitimate force tasked with defending Lebanon is the Lebanese military.

Hariri affirmed Lebanon’s right to tap its natural resources, warning that Israel’s inflammatory rhetoric hinders any sort of permanent cease-fire between both countries.

The Premier then expressed optimism in maintaining positive relations with neighbouring Arab states, telling reporters that Lebanon has been abiding by the dissociation policy agreed upon with rival political parties, before praising “the banking sector which is the cornerstone of our economy.”

Prior to his meeting with Hariri, Tillerson held talks with Speaker Nabih Berri, also a close ally of Hezbollah. The Secretary of State reaffirmed to Berri the importance of the close US-Lebanese partnership as the “two countries work together to pursue common goals that advance Lebanon’s sovereignty, stability, and prosperity.”