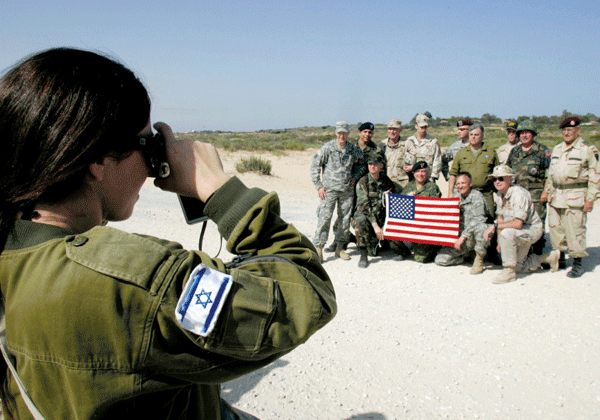 In a globalized world, with the threat of terrorism constantly changing, military relations and attachés take on even greater importance.

In June 2017, some of Israel’s best soldiers picked up their gear and flew to Cyprus for a multi-day exercise. Combat engineers, aid force personnel and 500 soldiers from the IDF’s Command Brigade traveled on a C-130J Super Hercules with Black Hawk escorts to the Troodos Mountains.

There, at 2,000 meters above sea-level, among the monasteries and forests that host ski resorts in the winter, the soldiers disembarked and set off to train with 100 special forces troops from the Cypriot National Guard.

It was one of the highlights of last year’s cooperation between Israel and foreign militaries and part of much larger cooperation and connections Israel has formed with armies abroad.

In August 2015, US Army Chief of Staff Gen. Mark Milley gave an interview at Fort Benning. He was looking at whether to incorporate women into traditionally male combat units. Among the countries he mentioned as a model was Israel. In 2017 Milley paid his third visit to Israel. He met with Maj.-Gen. Kobi Barak, commander of Israel’s GOC Army Headquarters, and thanked him for the close relations between the ground forces of both countries.

“I think it [military relations] is one of our most important cooperative ventures with the US,” says Lt.-Col. Shirley Sobel-Yosiphon, who heads the IDF Ground Forces’ international relations department.

For hundreds of years, military attachés and commanders have been keys to the relations between countries. They have learned from one another about military affairs and shared experiences with friendly nations.

In a globalized world, with the threat of terrorism constantly changing, military relations and attachés take on even greater importance. Last year saw 500 different activities undertaken between Israel and the armies of foreign countries, the highest number in recent years.

“It can be a visit to Israel or our visits abroad or a working group or staff talks,” says Sobel-Yosiphon.

Sobel-Yosiphon, who was born in South Africa, has been in the IDF almost 25 years. “From when I was very young, I knew it would be my career,” she says.

Her position is all about forming close personal re-lationships with counterparts abroad. It involves numerous units, not just infantry and tanks, but also the planning division, technological units, logistics, as well as units such as snipers and combat engineers.

“The army created these connections and collaborations with foreign armies, and it is part of Israel’s connections to the international community,” she says.

In the area of massive conventional armies, strategy and tactics might move more slowly. But in the last few decades, armies have grown more nimble and have adopted technologies faster. This is especially true after the tech revolutions of the 1990s.

With the war on terrorism, many foreign countries are hungry to learn from Israel.

Sobel-Yosiphon says a lot of what takes place involves building personal relationships over many years. “They come here and we go there.” As career officers such as Milley move up the ladder, their counterparts in Israel do the same and this has far-reaching consequences.

“We also do exercises together, and this strengthens the IDF. We have a lot of experience working with these foreign countries.”

Sobel-Yosiphon sees this as part of Israel’s strategic relations.

“The chief of the Italian army came this year for the second time. There were a lot of mutual issues the commanders spoke about, concepts, thinking about the future battlefields and the challenges of counterterrorism, all the tech that is coming into the arena and the initiatives we have. It’s not just information, it’s tech as well,” she says.

According to Gal Perl Finkel and Gabi Siboni in an INSS Insight paper, the exercise in Cyprus consisted of practice for “incursions, land and urban warfare, taking control of areas from which rockets are fired and tunnel warfare.” They noted that the terrain is “clearly similar to that of the Lebanese mountains.”

That conjures up the threats that Hezbollah has been making toward Israel in recent years as it and its supporters in Iran try to put down roots in Lebanon.

But Israel’s relations with Cyprus are about more than just what Israel gets out of it.

“The government heads of Israel, Cyprus and Greece met earlier this month in Greece in yet another trilateral meeting since the leaders of the three countries met in Nicosia a year ago to establish a new geopolitical bloc in the Eastern Mediterranean, partly as a counterweight to Turkey,” the paper stated. In October, the Cypriots came to Israel for more joint training and in December Israelis were back in Cyprus.

“This was a good example of close cooperation between the two countries’ ground forces,” says Sobel- Yosiphon. “I think it [IDF foreign connections] will continue to grow; we can see how it grows every year. It says a lot about the importance of foreign relations and military diplomacy.”

This is a “force multiplier” and will have major influence over the next decades in terms of how Israel and other countries confront the battlefield of the future.

Sobel-Yosiphon says that although she can’t detail all the exercises Israel is involved in, what is important are the human connections and personal relationships that come out of them.

“The human network and every step that is taken build to the next step. When the chief of the Italian army came here, it made it easier after that for their delegations to come here and ours to go there.”

Sobel-Yosiphon works to make sure that these military liaisons continue, even if people are rotated in and out of positions.

“There are certain countries coming into the arena and I know if I have to engage with that army or country,” she says.

This is multilayered, because she works only with ground forces, but other ministries and military industries are involved as well.

“I’ve seen more commanders understanding how this area of cooperation can support us, and from year to year it grows,” she says.