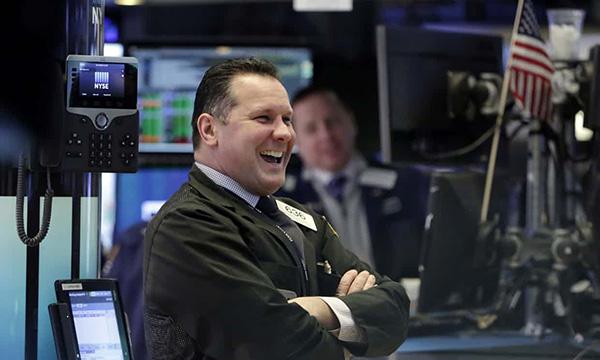 New evidence of mounting US inflation has failed to derail the recovery from last week’s plunge in share prices, with global stock markets registering fresh gains.

Last week’s steep drop in equity prices was a fading memory as Wall Street shrugged off concerns that mounting cost of living pressures could force the Federal Reserve, the US central bank, into a series of interest rate rises in 2018.

Jitters about the world’s biggest economy were reflected in movements on the foreign exchanges, where the dollar slid to a 15-month low against the Japanese yen and lost ground against the pound and the euro.

The Dow Jones Industrial Average was up almost 200 points by lunchtime, while the broader-based S&P 500 also rose. Sentiment was helped by strong results from Cisco and news that Warren Buffett’s Berkshire Hathaway had made Apple its top investment.

Wall Street was on course to post its fifth day of gains despite the latest in a run of official figures pointing to higher inflation.

“The 0.4% month on month rebound in core producer prices left the annual rate at 2.2%, close to a six-year high,” Hunter said. That partly reflects the upward pressure on import prices from the weaker dollar, which will soon start to feed through into consumer prices, too.”

Producer prices provide an indication of inflationary pressures early in the pipeline and come after other figures released in the past two weeks showed a pick up in wage growth for some better paid workers and a pick up in underlying consumer prices.

A rate increase from the Fed at its next meeting in March is now seen as inevitable, but analysts are also revising up their forecasts for future moves.

Kathy Bostjancic, US analyst at Oxford Economics said: “We now look for the Fed to tighten interest rates four times this year, up from our prior forecast of three hikes, absent large market turbulence that could temper the amount of rate increase.”

Leo Grohowski, the chief investment officer at BNY Mellon Wealth Management in New York, said share prices were being supported by the strong earnings being reported by American companies. Around four out of five corporations were beating the forecasts made by analysts, he said. He was encouraged by the reaction to the inflation data, which has overshadowed robust earnings, with about 80% of companies beating analysts’ estimates.

“There were a lot of eyes fixating on the PPI number this morning, it came in a little hot. But much like yesterday, the market’s shaking it off,” Grohowski said.