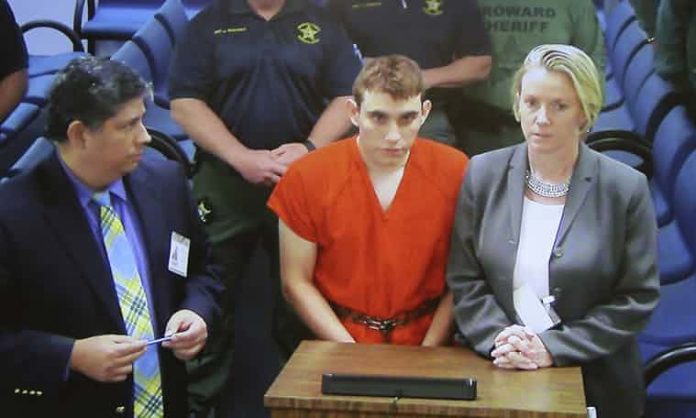 Nikolas Cruz, 19, charged with 17 counts of murder as officials confirm the AR-15 rifle used to commit massacre was purchased legally

The suspect in the school shooting that left 17 people dead in Parkland, Florida, escaped the scene by dropping his rifle and backpack and mixing in with the crowd of fleeing students, authorities confirmed at a press conference Thursday.

Officials also confirmed that the AR-15 rifle he used in the massacre was purchased lawfully in Florida by the gunman over a year ago.

The new details provide a timeline of events leading up to the arrest of Nikolas Cruz, 19, more than an hour after he opened fire in the Marjory Stoneman Douglas high school.

The teenager arrived at the school in an Uber at 2.19pm on Wednesday, Broward County sheriff Scott Israel said, and entered the school carrying a rifle in a soft black case. He began shooting at 2.21pm, moving from room to room and between the school’s floors, at one point returning to a classroom to open fire again. Cruz then abandoned his rifle and bag and ran from the building, across tennis courts and playing fields, blending in with the students who were running for their lives.

The suspect then went to a Walmart, purchased a drink at a Subway restaurant, and went to a McDonald’s. He was arrested at 3.41pm, about 40 minutes after he left the fast food restaurant.

At the press conference, Israel read aloud the names of the 17 victims, including football coach Aaron Feis, whom he called “my very very very special friend who I will miss”.

Earlier on Thursday, Cruz was reported to have confessed to carrying out the shooting, one of the worst massacres in modern American history. He confessed under questioning by Broward County sheriff’s officers, according to an official report obtained by the Associated Press.

Cruz told interrogating officers of the Broward County sheriff’s office that he “began shooting students that he saw in the hallways and on school grounds”, according to the report. The teenager went on to say that he brought additional magazines to Marjory Stoneman Douglas high school “and kept them hidden in a backpack until he got on campus to begin his assault”.

News of Cruz’s alleged confession came amid an eruption of impassioned calls for action against gun violence from young survivors, community leaders and law enforcement. The shooting ranked among the 10 deadliest gun rampages in the country, three of which have happened in the past four months.

“The violence has to stop. We cannot lose another child in this country to violence in a school,” said Florida’s governor, Rick Scott, promising to meet state lawmakers to search for solutions on mental illness and gun control.

The official in charge of public schools in Broward County, which includes Marjory Stoneman Douglas high school, the scene of Wednesday’s tragedy, said: “Now, now is the time for this country to have a real conversation on sensible gun control laws.”

But amid the anguished cries for action, a national tone was set by Donald Trump that was largely devoid of a sense of urgency. In a televised “address to the nation” made in part directly to the children of America – “you are never alone”, he said – the president gave no concrete indications of steps to prevent repetitions of Wednesday’s disaster.

Trump said he would visit Parkland, and stage in coming weeks a meeting of governors from around the country to discuss school safety. But he warned against early measures: “It is not enough to take actions that make us feel we are making a difference. We must actually make that difference,” he said.

Cruz made his first appearance in court on Thursday, charged with 17 counts of premeditated murder. Dressed in an orange jumpsuit, with his hands cuffed, Cruz listened silently as the judge ordered that he remain in custody without bond.

Survivors’ accounts recorded acts of extraordinary courage, including reports of a football coach,Feis, who jumped in front of the gunman to shield his pupils from the bullets.

“When he was tragically, inhumanely killed, he did it protecting others,” said Sheriff Israel.

There were also accounts of exceptional bravery from students. Colton Haab, 17, pulled 90 fellow pupils from the hallway into a classroom after the shooting started and barricaded the door as gunshots rang outside. “I knew if he broke the window he was coming in the room, and if he was coming in that room I was going to stop him with everything I had or die trying,” he said.

Medical staff said on Thursday that of the 14 injured, five had been released and seven remained in critical condition.

Parkland, a well-to-do suburb of Fort Lauderdale, has now entered that most mournful ledger of American towns that have had carnage wrought upon their schools. It will forever be tagged with Columbine, the Colorado high school where 12 students and a teacher were killed in 1999, and Sandy Hook, scene of the mowing down of 20 young children and six adults in 2012.

What Parkland appears unlikely to become associated with is any search for a solution at federal level. A day after the tragedy, signs of any meaningful debate within Congress were scant at best.

“We need to pray”, and “we need to take a breath and collect the facts”, were the responses given by Paul Ryan, Republican speaker of the House of Representatives.

Jeff Sessions, the US attorney general, delivered more pointed words to a conference of sheriffs, saying “we have got to confront the problem. This situation cannot continue.” But aside from a promise to “study the intersection of mental health and criminality”, he avoided references to specific policy changes.

Anger and frustration began to explode, however, among those touched most intimately by the calamity. A pupil named Sarah at Stoneman Douglas responded to Trump’s tweeted condolences by lashing out in her own tweet: “I don’t want your condolences – multiple of my fellow classmates are dead. Do something instead of sending prayers.”

Small groups of students assembled on Thursday morning on the roadway outside Stoneman Douglas. Kaleb Martinez, 16, a junior year student was inside the school when the shooting occurred.

“This is the best, definitely the best time to be talking about cutting out guns.” Martinez said. “People who have guns, that needs to go, that needs to stop. This is crazy. No family should have to worry about sending their kids to school and if they’re going to come home or not.”

Any debate about how to respond to gun violence is likely to be informed by details unfolding about the Parkland shooter. Before the court hearing, details emerged of potential warning signs that had been missed in advance of the massacre.

The FBI disclosed that they had been informed last September that a YouTube user going under the name Nikolas Cruz had expressed a desire to become a “professional school shooter”, but that the bureau “could not further identify the person who made the comment”.

Questions are now being asked about how a teenager known widely in his community as a “troubled kid”, who had received sporadic treatment for mental health problems and was expelled from Stoneman Douglas school for violence, had an obsession with firearms and delighted in shooting animals could so easily buy a semi-automatic AR-15 rifle of the sort that has been at the centre of so many previous rampages.

Despite this litany, and despite being too young to buy beer, Cruz legally purchased the AR-15 about a year ago at Sunrise Tactical Supply in Coral Springs, Florida, Israel confirmed Thursday. Federal law in the US allows anyone over 18 to buy a rifle given limited background checks.