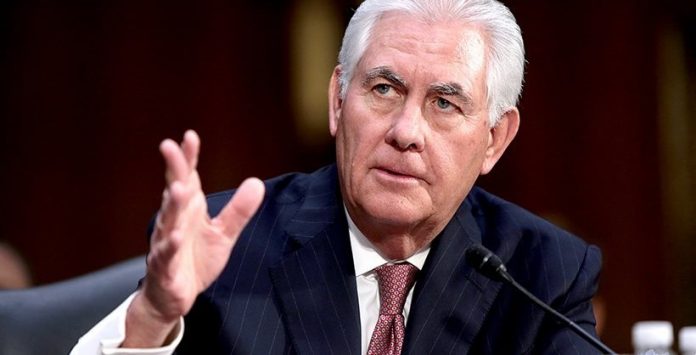 U.S. Secretary of State Rex Tillerson said on Feb. 15 that the United States has “never given heavy arms” to the Syrian Kurdish People’s Protection Units (YPG) and there is therefore “nothing to take back.”

“We have never given heavy arms to the YPG so there is none to take back,” Tillerson said in Beirut, hours before meeting with Turkish President Recep Tayyip Erdoğan in Ankara.

On the other hand, Defense Minister Nurettin Canikli said his U.S. counterpart Jim Mattis told him on the same day that the U.S. was working on plans to take back weapons supplied to the YPG, speaking at the close of a NATO defense ministers’ meeting in Brussels.

The two NATO allies have long been engaged in a row over support the U.S. has provided to the YPG. Turkey has since Jan. 20 been engaged in a military operation in the northwestern Syrian district of Afrin, aiming to clear it of YPG militants.

The U.S. has called on Turkey to focus on fighting ISIL but Turkey has repeatedly said it has different priorities, including preventing a corridor dominated by the YPG, seen as linked to the outlawed Kurdistan Workers’ Party (PKK), on its southern borders. The U.S. also lists the PKK as a terror organization.

Despite objections from Ankara, Washington has long equipped the Syrian Democratic Forces (SDF), a militant group dominated by the YPG, as a ground force in its fight against the Islamic State of Iraq and the Levant (ISIL).

Along with Ankara and the EU, the U.S. also lists the YPG as a terror organization. An official report prepared by U.S. National Security Director Daniel Coats and presented to the U.S. Congress on Feb. 13 even defined the YPG as the Syrian wing of the PKK, acknowledging that it is searching for autonomy.

“The Kurdish People’s Protection Units – the Syrian militia of the Kurdistan Workers’ Party (PKK) – probably will seek some form of autonomy but will face resistance from Russia, Iran, and Turkey,” read the “Worldwide Threat Assessment” report.

On Feb. 12, the Pentagon requested $300 million to train and equip the SDF, and wanted nearly as much to build a “border security force” led by the group in Syria.