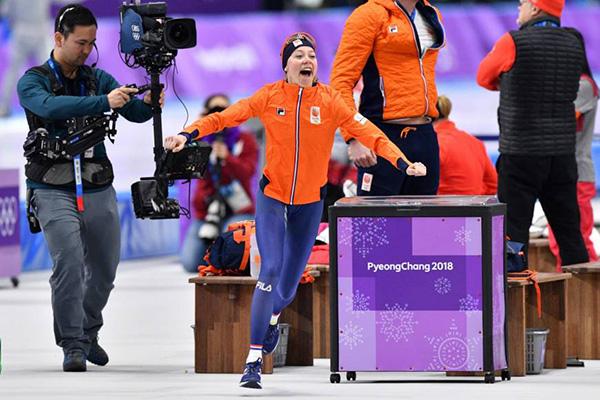 Kyodo
GANGNEUNG, SOUTH KOREA – Esmee Visser continued the Netherlands’ unrivaled run in Pyeongchang Olympic speed skating Friday, winning the 5,000-meter gold medal, her country’s sixth at Gangneung Oval at these games.
Up against the sport’s royalty in Martina Sablikova and Claudia Pechstein, the diminutive Dutchwoman separated herself from the field to win in 6 minutes, 50.23 seconds.
Czech Sablikova won silver, 1.62 seconds behind Visser, and bronze went to Olympic debutant Natalia Voronina when, in the last pairing, the Olympic athlete from Russia pushed the Netherlands’ Annouk van der Weijden into fourth.
“I told myself to just enjoy the race, focus on how I skate and what I’ve done in training, then something is possible,” said the 22-year-old Visser. “But I never imagined this. I thought a podium would be good, I never thought about this.
“I dreamed of the Olympics in four years in Beijing. It was also a huge achievement that I could compete here and that I qualified because competition in the Netherlands is really big. I improve every day — it’s unbelievable, what I did today,” she said.
Sablikova just missed on her chance to win the event for the third straight Olympics, but the medal — her sixth — allowed her to equal the Czech record for most Olympic hardware, summer or winter.
“This means everything. We had, this year, so (many) problems. Now it’s satisfaction for me. It doesn’t matter what it was three months before. Now I have a silver, I’m happy,” said the 30-year-old.
Three-time Olympic champion over the distance, Pechstein, who was attempting to win a ninth medal in her seventh games, finished well back in eighth, the 45-year-old immediately off the pace in her race.
There was disappointment for Japan with neither Misaki Oshigiri nor Nana Takagi looking like they might threaten the podium. Oshigiri finished ninth of the 12 skaters and Takagi last.