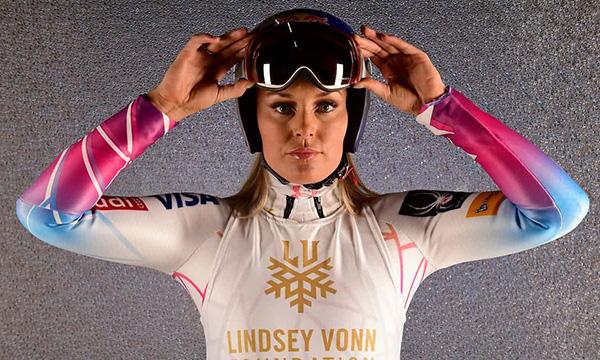 The American has never held back, whether with her aggression on the piste or her criticism of the US president. Now she is set for what is likely to be her final Olympics
Amanda Doyle
On Saturday, Lindsey Vonn will return to the Olympic stage for the first time since she won downhill gold in Vancouver eight years ago and carved out a place in US sports history, becoming the first American woman to win alpine skiing’s marquee event at the Games. The intervening years have looked more like a moguls course than a smooth ski slope for the 33-year-old, who has dealt with plenty of bumps on her way back to the Olympics. Yet she remains a risk-taker, continuously willing to put everything on the line for what she loves and what she believes in, an audacity that just could lead her back to the top of the Olympic podium.
A series of right knee injuries and two subsequent surgeries sidelined Vonn ahead of the Sochi Games and prevented her from defending her downhill title four years ago. While ailments and age have forced Vonn to adjust her training – she limits her time on the mountain and places greater emphasis on warming up to protect her body from further wear and tear – the looming threat of injury hasn’t caused her to adopt more cautious race tactics.
“I think that’s what has allowed me to have so much success in my career, the fact that I’m willing to risk everything every time I’m in the starting gate, but it’s also been the reason I’ve crashed so many times” she told the Guardian last month. “We’re going so fast and we’re pushing the limits all the time. Things can go wrong and you get injured, but I feel like that’s just part of the job description. When I’m in the starting gate I want to win, and I’m going to put it on the line. If I crash, so be it, but at least I’ve given 110%.”
Vonn’s ski style has always been somewhat unusual, even when she was growing up in Minnesota, where she learned her craft on a small hill known as ‘The Bump’ at the Buck Hill Ski Area. Several instructors tried to fix what they thought were flaws, but the novice skier was encouraged by then-coach Erich Sailer to maintain her unconventional technique.
“I just skied really inside,” she explained. “I was really lateral and I’m pretty tall for a ski racer and everyone thought that was a weakness. But my coach told me it wasn’t, that it was actually a strength, so I didn’t change it. Eventually, in downhill, that became one of my strongest attributes, how I can lean into a turn and get a different angulation than most athletes.”
Vonn used that technique to schuss her way to the top of her sport. She’s one of the most decorated ski racers ever, having accrued more World Cup victories (81) than any other woman in alpine skiing history. And she’s just five wins away from tying the overall record of 86, set by Sweden’s Ingemar Stenmark. Still, World Cup titles carry little weight with the average American sports fan, who typically pays attention to alpine skiing once every four years. In the US, an Olympic athlete’s success is typically tied to his or her medal count. And prolific stars such as Michael Phelps, who won 23 golds in his career, have skewed the perception of what it means to be successful at the Olympics.
“We definitely have been spoiled by Michael,” Vonn said. “But in ski racing there are a lot more variables. There’s wind, there’s changing snow conditions, there’s what shirt number you have. There are so many things that could potentially inhibit you from getting an Olympic medal that may have nothing to do with how good of a skier you are or how well you perform.”

Vonn has also felt the weight of the American public’s expectations off the slopes, most recently for comments she made about US president Donald Trump in an interview with CNN back in December. For most Olympic athletes, whose popularity is often rooted in patriotism, wading into political waters can be a frightening prospect, one that has the potential to scare off the sponsorship opportunities that crop up once a quadrennium and vanish shortly after the cauldron is extinguished. For Vonn, whose star power is predicated on her near-universal appeal, the risk is even greater. Yet that didn’t discourage her from broaching the topic.
“I hope to represent the people of the United States, not the president. … I want to represent our country well, and I don’t think there are a lot of people currently in our government that do that,” she said in the interview. She also revealed that she did not plan on joining the rest of Team USA for the traditional post-Olympics trip to the White House. Vonn faced backlash after those comments but remained steadfast in her beliefs, which she said don’t make her any less American.
“Everyone has different opinions, that’s what makes America great,” she said. “I think if you love your country that makes you patriotic.”
Vonn will represent the United States at the Games for a fourth and likely final time in Pyeongchang. Her program starts with the super-G on Saturday morning in the South Korean mountains (Friday night in the US) before next week’s downhill and alpine combined. Recent World Cup victories, including two downhill wins earlier this month, prove she hasn’t lost her edge.
“It’s been eight years and I’ve worked my butt off to be able to come into these Olympics in good shape and in a good position to get as many medals as possible,” she said.
Vonn is all too familiar with how swiftly medal hopes can be quashed, which is why she has taken extra precautions to remain healthy in Pyeongchang, often donning gloves indoors and a surgical mask to stave off illness. And then there are the variables she can’t control, including the tempestuous winds that have disrupted the alpine skiing program in South Korea. But she is better equipped to cope with the unknowns than many of her younger competitors.
“With age comes a lot of experience,” she said. “For a lot of athletes, this is their first time under the pressure of the Olympics and having a lot of expectations put on their shoulders, and I’ve dealt with that before. I’ve already won the Olympics, so I’m not under pressure to do something I’ve never done before. No matter what is thrown at me, the weather or media or anything, I feel like I can handle it.”
Still, Vonn knows her age will prevent her from continuing in her sport much longer. Retirement is imminent – likely within the next season or two, which she hopes is enough time to break Stenmark’s record – but she plans to compete as long as she’s physically capable. “I love what I do so much I don’t really want to stop doing it,” she said. “I feel like my body is going to tell me that I need to retire more so than my mind.”
Until then, she’s going to keep risking it all because that’s who she is.
“There’s nothing really special about me. I just ski fast.”