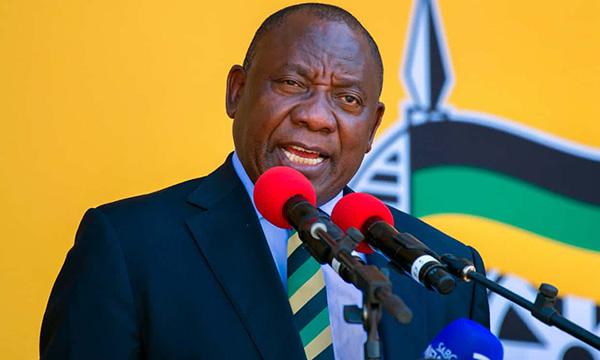 New president vows to bolster economy and combat inequality, one day after replacing Zuma
Jason Burke in Johannesburg
Cyril Ramaphosa invoked the memory and message of Nelson Mandela as he pledged to restore economic growth, fight corruption and tackle entrenched inequality in South Africa in the first major speech of his presidency on Friday.
“Guided by [Mandela’s] example, we will use this year to reinforce our commitment to ethical behaviour as well as ethical leadership. We are not merely honouring the past but building the future … South Africa belongs to all who live in it,” Ramaphosa, 65, said.
“It is a new dawn that is inspired by our collective memory of Nelson Mandela and the changes that are unfolding … We will build a new nation and confront the injustices of the past and the inequalities of the present.”
The former deputy president was sworn in as head of state hours after being elected unanimously by parliament to replace Jacob Zuma, who resigned late on Wednesday following accusations of corruption and economic mismanagement.
The annual state of the nation address was to have been given by Zuma eight days ago, but was postponed to allow Ramaphosa, who is the leader of the ruling African National Congress, and other senior party officials to negotiate his predecessor’s departure.
The new head of state thanked the people of South Africa for their patience during the period of political transition. “We will turn the tide against corruption,” he added, to huge cheers.
Former presidents Thabo Mbeki and FW de Klerk were in the public gallery, though Zuma, who had been invited, did not attend.
There are high expectations of the president, and ANC officials will be looking to him to improve its flagging popularity. Economic decline and multiple corruption scandals have undermined the image and legitimacy of the party, which led the struggle against apartheid and has been in power since Mandela became president after South Africa’s first free elections in 1994.
In his speech, cheered by lawmakers, Ramaphosa both lauded the achievements of the ANC in recent years, and sought to reassure overseas investors.
“Our task is to seize this moment of hope. This year we will be initiating new measures to set this country on a new path … to build economic regeneration. Tough decisions will have to be made,” he said, promising a “job summit” to boost employment.
Other promised measures would bolster youth employment, startups, mining and the tourism industry. A minimum wage will be introduced later this year, effecting 6 million South Africans, as well as initiatives to tackle rising crime, the president said.
Ramaphosa promised a consultation on accelerated land redistribution “to redress a grave historical injustice” – a key demand of many in the ANC – and promised to maintain some elements of an expensive pledge by Zuma to offer free higher education to poor students.
Ramaphosa, a former anti-apartheid activist turned successful businessman, is the standard bearer for the moderate, reformist faction of the ANC. Zuma, 75, represented the party’s more populist, nationalist element, commentators said.
David Everatt, a professor of politics at University of the Witwatersrand, Johannesburg, wrote on the Conversation: “Ramaphosa is no messiah, and when the post-Zuma champagne corks stop popping, South Africans need to assess him as a mere mortal.”

There will be no new civil clashes in Armenia – PM Pashinyan