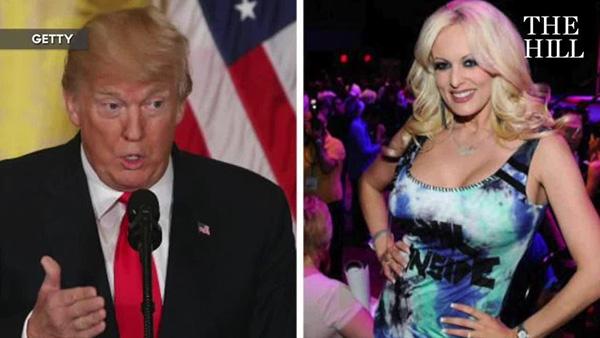 According to the New Yorker, Karen McDougal claims the affair took place in 2006 and that her story was silenced in the months before Trump was elected president
Alan Yuhas in New York
Donald Trump had an extramarital affair with a woman named Karen McDougal, a Playboy model at the time, according to a report in the New Yorker, which also claims her story was silenced in the months before the businessman was elected president.
The story was first reported by the Wall Street Journal in November 2016, though McDougal declined to comment at that time.
According to the New Yorker, Trump met McDougal at a Los Angeles Playboy party during a taping of his reality show, the Apprentice, in June 2006. The magazine has acquired eight pages documenting the affair, handwritten by McDougal, which she verified.
The magazine also claims that a tabloid publisher, American Media Inc (AMI), purchased the rights to McDougal’s account for $150,000 and then declined to publish it.
The allegations of an extramarital affair and a subsequent payoff mirrors the account of Stephanie Clifford, a pornographic actor who goes by the stage name Stormy Daniels. Clifford told a magazine in 2011 that she had an affair with Trump in 2006, a year after he married his third wife, Melania, and not long after the birth of their son, Barron.
Stormy Daniels on Jimmy Kimmel: porn actor casts doubt on denial of Trump affair – video
This week Trump’s longstanding personal attorney, Michael Cohen, said he had paid $130,000 to Clifford a month before the 2016 election. He has declined to say why.
Cohen told the New York Times that the payment was “lawful, and was not a campaign contribution or a campaign expenditure by anyone”.
“Neither the Trump Organization nor the Trump campaign was a party to the transaction with Ms Clifford, and neither reimbursed me for the payment, either directly or indirectly,” Cohen said. The Wall Street Journal first reported on that payment.
The White House has denied allegations of a 2006 affair with Clifford, saying through a spokesperson: “These are old, recycled reports, which were published and strongly denied prior to the election.”
Clifford has so far declined to comment on the reports herself.
Asked about McDougal, a White House spokesperson said: “This is an old story that is just more fake news. The president says he never had a relationship with McDougal.”
McDougal declined to make any comment about Trump, but told the New Yorker that she expressed regret about the contract with AMI. “It took my rights away,” McDougal told the New Yorker. “At this point I feel I can’t talk about anything without getting into trouble, because I don’t know what I’m allowed to talk about. I’m afraid to even mention his name.”
In her handwritten account, McDougal wrote that after the party she spoke with Trump by phone frequently, and “was into his intelligence + charm (sic). Such a polite man.” She added that after sleeping together at a private bungalow at the Beverly Hills Hotel, “he offered me money”.
“I looked at him (+ felt sad) + said, ‘No thanks – I’m not ‘that girl,’” she wrote. “’I slept w/ you because I like you – NOT for money’ – He told me ‘you are special.’”
Clifford also claimed in her 2011 interview that she met Trump at a bungalow there, and a former contestant on The Apprentice, Summer Zervos, accused Trump of assaulting her at a bungalow at the hotel.
McDougal wrote that the affair lasted nine months, until April 2007, and that over its course she visited Trump residences, attended events with him, and met his two adult sons, Don Jr and Eric. One of her friends told the New Yorker that she ended the affair because of feelings of guilt and disrespect, after Trump made denigrating remarks toward others.
The New Yorker story also details legal negotiations over the rights to McDougal’s story, drawing on emails, texts and legal documents. She ultimately signed a limited life-story rights agreement with AMI, but told the magazine she felt emboldened in recent months, hearing women speak out about abuses by powerful men.
Nearly 20 women have accused Trump of sexual misconduct, ranging from unwanted touching to groping to assault. Trump has denied any wrongdoing, and sometimes claimed that he does not know the women. The White House has called his accusers liars.
Trump was recorded in 2005 bragging in vulgar terms about groping women, statements he has tried to dismiss as “locker-room banter”, which surfaced at a crucial stage of the 2016 presidential election. It caused a firestorm and Trump made a rare apology, but none of it stopped him from winning the White House.