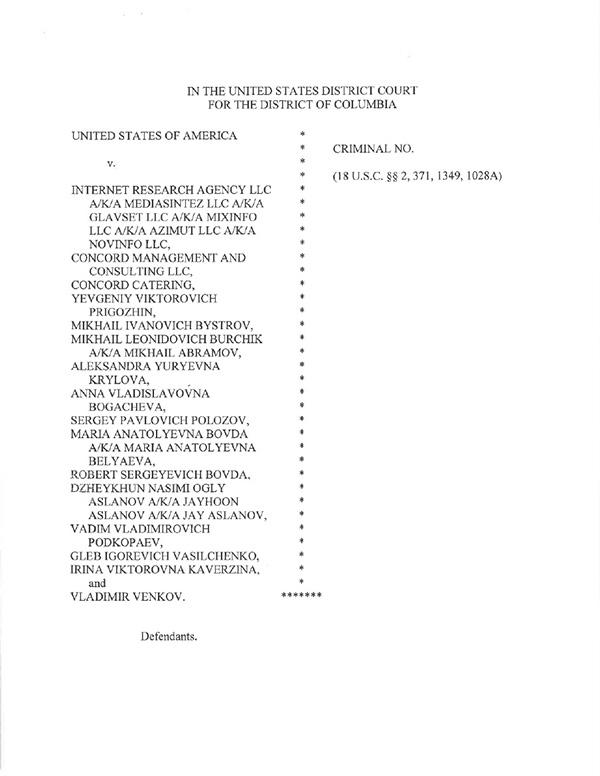 A US federal grand jury has indicted 13 Russian nationals and three Russian entities accused of interfering with US elections and political processes. However, there are “no allegations” they influenced the 2016 election.
The indictment accuses the defendants of “supporting the presidential campaign of then-candidate Donald J. Trump…and disparaging Hillary Clinton.” It also claims the defendants staged political rallies and bought political advertising while posing as grassroots entities. The document says an organization known as the Internet Research Agency “sought, in part, to conduct what it called ‘information warfare against the United States of America’ through fictitious US personas on social media platforms and other Internet-based media.”
“By in or around May 2014, the organization’s strategy included interfering with the 2016 US presidential election, with the stated goal of “spread[ing] distrust towards the candidates and the political system in general,” the indictment says, referring to the Internet Research Agency.
The defendants, according to the indictment, were advised to “focus their activities on purple states like Colorado, Virginia, and Florida.”
US Deputy Attorney General Rod Rosenstein said during a press conference that the defendants engaged in “information warfare against the US, with the stated goal of spreading distrust towards the candidates and the political system in general.”
It is alleged that the two traveled to the US in 2014 to collect intelligence for their operations. They also reportedly purchased space on US servers to establish a virtual private network (VPN) and made hundreds of accounts on Facebook, Instagram and Twitter. They “posed as politically and socially active Americans, advocating for and against particular candidates,” Rosenstein said during a press conference.
He went on to say that they “recruited and paid real Americans” to engage in political activity by pretending to be grassroots activists, adding that those Americans did not know they were working with Russians. Rosenstein noted, however, that “there is no allegation in the indictment that it had any effect on the outcome of the election.”
The indictment was not left unanswered though. Spokesperson for the Russian Foreign Ministry, Maria Zakharova, call the latest affront by the US “absurd.” She noted that 13 people would have hardly reached the desired outcome even if they planned to meddle with the polls.
Russian businessman Evgeny Prigozhin, who was also on the list, opted for a lighter tone, saying that Americans are “emotional people” and jokingly suggested that one should allow them to “see the devil.”
Moscow has repeatedly refuted the claims of alleged meddling in the 2016 presidential elections. Russian President Vladimir Putin also ridiculed such claims, suggesting that the US was “not a banana republic” to be treated that way.