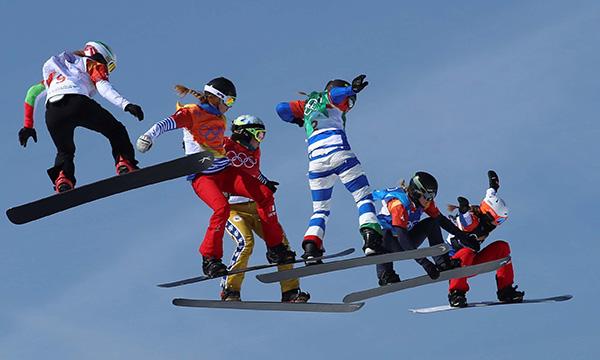 Triple world champion Elise Christie will compete in the 1500m short-track speed skating
Brit watch:
• 00:05-1400: Curling continues – GB women face Denmark (00:05-03:00) and South Korea (11:05-14:00).
• 04:00-05:35: Freestyle skiers Izzy Atkin and Katie Summerhayes bid for honours in the women’s slopestyle event.
• 05:05-08:00: GB men’s curling team face South Korea.
• 10:00-12:11: Short-track star Elise Christie bids for a first Olympic medal in the 1500m, along with fellow Britons Charlotte Gilmartin and Kathryn Thomson.
• 10:00-12:55: Speed skating team-mates Farrell Treacy and Joshua Cheetham will hope to continue their participation in the men’s 1,000m.
• 11:00-12:15: GB’s first aerials skier since 1998 – Lloyd Wallace – competes in the qualification round.
• 11:15-12:10: Biathlete Amanda Lightfoot returns for the women’s 12.5km mass start.
• 11:20-13:40: Lizzy Yarnold bids to retain her Olympic crown, while team-mate Laura Deas also hopes to be in contention for a medal.
KEY ACTION TO WATCH:
This has the potential to be Team GB’s winter version of ‘Super Saturday’.
OK, it’s not going to live up to those breathtaking six golds at London 2012, but given the best GB medal haul on a single day at Winter Games is two – achieved on 3 February 1924 – there is the potential for history to be made.
Skeleton:
11:20-13:40: Lizzy Yarnold may not be the dominant force she was four years ago – struggling with a back problem and a debilitating vestibular condition leading to extreme motion sickness – however, she is a big-time performer.
Despite taking a year out of the sport to combat exhaustion she fought back to claim World Championship bronze last season and finished fourth at both the Olympic test event and season-ending World Cup in January.
The women’s field is stacked with talent and while German duo Jacqueline Lolling and Tina Hermann are the favourites, Yarnold, former equestrian rider turned GB skeleton athlete Laura Deas and Canada’s Elisabeth Vathje are among a group of sliders who could challenge for honours.
Slopestyle skiing:
04:00-05:35: Former US skier Izzy Atkin has made incredible progress as part of the British team over the past 12 months.
From being a virtually unknown skier outside of the freestyle community, World Championship, World Cup and X Games honours have made her one of Team GB’s leading medal contenders.
Team-mate Katie Summerhayes was seventh in Sochi four years ago, has won major medals since those Games and is an outside contender.
Short track:
10:00-12:55: The 1500m will be Elise Christie’s second medal chance at the Games.
Although she is the world champion over the distance, it is an event she has struggled with this season while nursing injuries and South Korea’s Choi Min-jeong and Shim Suk-hee have dominated.
However, the 27-year-old has a plan and will hope her team-mates Charlotte Gilmartin and Kathryn Thomson can offer her some protection in the early rounds.
Aerials:
11:00-12:15: Injuries – even extremely serious ones – are far from uncommon in winter sports and in August Lloyd Wallace’s Olympic dream looked over after he was placed in an induced coma following a “severe” head injury sustained in training.
Wallace – who remembers nothing of the accident – has recovered to make the Team GB line-up in one of the most captivating sports, where athletes are propelled to around 20 metres in the air.
He will hope to make the final in his Olympic debut, but among the leading medal contenders is expected to be Belarusian defending champion and world gold medallist Anton Kushnir.
Did you know?
Team GB athlete Lloyd Wallace is the fifth Olympian in his family. His parents were both aerials skiers – Jilly Curry at the 1992 and 1994 Games, Robin Wallace at the 1988 Olympics – while uncle Shaun Wallace was a cyclist in 1984 and 1996. Wallace’s maternal grandfather Peter Curry also competed in the 3,000m steeplechase at the 1948 London Games.
Ice hockey:
12:10-14:30: As if there was not already enough to be excited about on the middle Saturday of the Games, the Olympic schedulers have thrown in another tasty treat – a USA v Russia showdown.
It is 38 years since the ‘Miracle on Ice’ when the USA upset the odds to defeat the Soviet Union – their Cold War rivals – en route to claiming gold at the 1980 Moscow Games.
The USA were again triumphant over the host nation at Sochi 2014, but neither would go on to claim a medal – something both nations are desperate to avoid at Pyeongchang.
Figure skating:
01:00-05:25: Japan’s Yuzuru Hanyu bids to defend his title but the Japanese world champion has struggled with injury this season. Compatriot Shoma Uno, China’s Jin Boyang and American sensation Nathan Chen will be bidding to oust him.
Did you know?
Britain has won a skeleton medal at every Games since the sport was introduced to the Olympic programme in 2002.