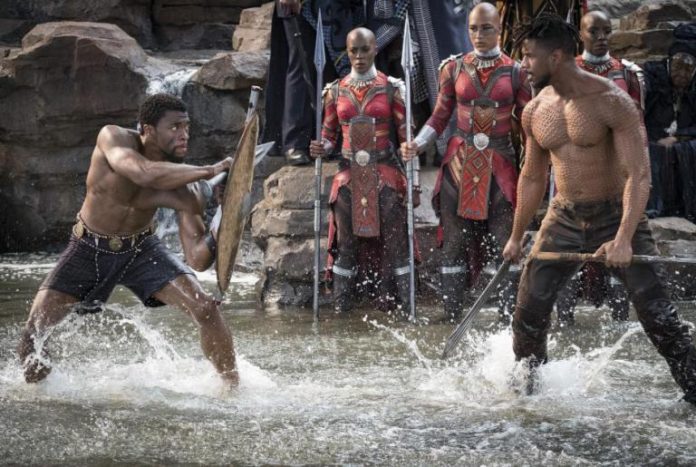 Sunday, 12:31AM: Disney/Marvel’s Black Panther is even more ferocious than ever imagined. Late night estimates (not from Disney) indicate that T’Challa is headed to $194M over three-days after a super Saturday night between $66.8M-$68M which is only 11% down from Friday on the high-end. Also if you back out $25.2M Thursday previews from Friday’s $76.4M, Saturday’s business is still technically +33%.  So that means business for Black Panther wasn’t front-loaded. Four-day figures remain a wild forecast for many analysts: They’re certain that Black Panther is expected to clear $220M, but he could fly as high as $230M. Projections at this minute are averaging around $223M. Over  three-days, Black Panther now beats Avengers: Age of  Ultron‘s 3-day number of $191.2M for the fifth best opening of all-time behind Avengers ($207.4M). On a four-day basis, it will also beat Ultron ($204.4M), but it might kick Avengers 4-day haul as well ($226.3M). It’s summer box office records during the second month of the year. Ryan Coogler went up to his hometown of Oakland on Thursday night to surprise Black Panther fans at previews while Chadwick Boseman, Coogler, Marvel boss Kevin Feige, EP Louis D’Esposito and the Marvel gang surprised fans at the Cinemark LA and other theaters in town on Friday night.

We’ll have more updates in the morning.

Saturday AM writethru, after Friday, 8:58PM: By the time the four-day President’s Day holiday stretch ends, Black Panther will have surpassed many of Marvel’s mightiest on the all-time domestic B.O. openers chart. Not to mention Disney continues to crowd the list, now taking up eight of the top 10 slots. Black Panther is now looking at the sixth-best opening of all-time on a three-day-basis with an estimated $185.8M per industry projections Saturday AM and a mind-blowing $213M over four days. Note that between Friday night and this morning (roughly a seven-hour time frame), estimates changed. Currently, Saturday should see around $61M which puts us at these figures. Anything significantly greater, and Black Panther breaks even more records.

How much do moviegoers love Black Panther? The Ryan Coogler-directed movie earned an A+ CinemaScore, Marvel’s second after 2012’s The Avengers. On Screen Engine/ComScore PostTrak, moviegoers are giving the pic an 88% definite recommend, a 95% overall positive score, while a third plan to see it again in the theater.

On the three-day all-time chart, Black Panther is just above Captain America: Civil War ($179.1M). Back in January, Fandango reported that out of the gate in its first 24 hours, Black Panther outstripped the advance tickets sales of Civil War. However, analysts didn’t rush to comp the Wakanda superhero to Marvel’s other titles. They just couldn’t believe at the time how massive this was going to be. PostTrak reports that 55% of the crowd bought their tickets online, indicating it was a major event for many, just like a Star Wars film. While Black Panther is under Avengers: Age of Ultron on the three-day all-time openers list ($191.2M), the pic is beating the sequel’s four-day run ($204.4M). Black Panther has already left Disney’s Beauty and the Beast ($174.7M) and WB/DC’s Batman v. Superman ($166M) in the dust to become the biggest pre-summer opener of all-time.

We hear from PostTrak that African American moviegoers at 40% are driving Black Panther‘s ticket sales. Diverse casts in films like Star Wars: The Force Awakens, The Last Jedi, the Fast and the Furious series, Twilight and Hunger Games have always yielded big business, but Black Panther, with its near-total Black ensemble cast, is a groundbreaking landmark for Hollywood. Disney will continue to break glass ceilings soon after Black Panther: On March 9, the studio will open the feature adaptation of the children’s classic A Wrinkle In Time, which at a $100M-plus budget is the first production of its scope to be directed by a woman of color, Oscar nominee Ava DuVernay (at one point before Coogler, she was in talks to potentially direct Black Panther). The pic is currently tracking for an opening around $35M four weeks out from release, but those estimates are bound to increase. Between Black Panther and Wrinkle, Disney will own the pre-summer space, much like they did with Zootopia and Jungle Book in 2016. In addition, Disney certainly has to be trailoring Wrinkle on Black Panther. In addition, Disney’s 2019 live-action release The Lion King touts a large Black cast that includes Beyonce, Donald Glover, Chiwetel Ejiofor, Keegan-Michael Key, James Earl Jones, Alfre Woodard and Eric Andre, among many others.

Black Panther in CinemaScore audience exits shows a 50/50 male-female audience with 25+ repping 66% of the crowd. Close to 70% came because it’s Black Panther, while 15% bought tickets because of Coogler and 28% because they are Michael B. Jordan and Chadwick Boseman fans. Already, the leading exhibitor AMC is reporting that 33 venues have already set admissions-revenue records for a single title on an opening weekend in play at the chain, and Saturday isn’t even over yet. Twenty-one AMC locations held more than 40 showtimes for Black Panther with AMC Southlake 24, in the Atlanta market, recording an astounding 83 showtimes yesterday.

Social media is on fire as people leave the theater: RelishMix is reporting that Twitter hashtags for #BlackPanther and @TheBlackPanther have set an all-time movie record since Thursday night, with 559K unique Twitter posts in one day (100K per day is exceptional) — and that’s over twice what the social media monitor saw with #LastJedi which peaked out at 232K in a day back in December.

After hiring Boseman back in October 2014 in a five-picture deal, Marvel spurred momentum for Black Panther by introducing him in Captain America: Civil War. Disney literally showed the media the first footage of the casino heist scene back in April during a Marvel press day. That footage became public back in July, when the studio unveiled it at San Diego Comic-Con.

Disney aired the first trailer for Black Panther in June during the NBA Finals Game 4, clocking 89M views in the first 24 hours. In addition, there was another trailer during NBA’s opening night on Oct. 17. Tickets went on sale on Jan. 8. This was announced during the ESPN College Football National Championship. Kendrick Lamar had a halftime performance during that event; he produced an album of songs from and inspired by the film. RelishMix notes, “Panther successfully took a page out of other big social movies like Pitch Perfect 3 and Fifty Shades Freed” in harnessing the social media powers of recording artists Lamar, The Weeknd and SZA. Already Lamar and SZA’s “All the Stars” has cleared 18M-plus views on YouTube:

There was a massive synergy program with integrations in ESPN College Football Playoffs and on ABC’s Blackish, Grownish, TGIT (Grey’s Anatomy, Scandal, How to Get Away With Murder), and Bravo’s Real Housewives. In the last week on ESPN, NBA All-Star D’Andre Jordan carpooled to an arena with Kenny Mayne, where they get a rare sighting of the Black Panther in an integrated car chase cameo.

RelishMix reports that Black Panther‘s social media universe resides at 901M, which is off the charts for a February release, especially when stacked up against other Marvel titles and their first week SMU’s, i.e. Thor: Ragnarok at 858M and Guardians of the Galaxy Vol. 2 at 792M. Black Panther counts 390K daily YouTube views, driving toward a total of 340M, which is immense, and nearly matching those on Facebook (330M). Some of Disney’s social media stunts for the pic included the first-ever video Q&A on Tumblr with Boseman. There was also a Twitter live Q&A event in NYC (Feb. 12) streamed globally and into 10 IMAX theaters around the US – archived for placements in Apple TV, Roku, Amazon (it’s a social marketing stunt that no other studio has attempted on such a mass scale).

Promo partners included Lexus, which ran a spot during Super Bowl LII titled “Long Live the King,” with fresh footage and clips showing the superhero’s sister and bodyguard using the 2018 Lexus LS 500 F Sport performance sedan to collect him. By partnering with Black Panther, The Toyota Motor Corp. auto brand was aiming at a younger demographic, and in the ad world, the younger the demo is, the more culturally diverse. According to RelishMix, the Lexus tie-in spot generated 4.3M views on social following the Super Bowl telecast.

Black Panther star Michael B. Jordan worked closely with the movie’s other promo partner, Pepsi’s Brisk Ice Tea. PepsiCo and Unilever launched an arts program in urban areas in partnership with Jordan, providing an opportunity to young film, visual arts and writing visionaries to be mentored by established artists. Jordan directed, produced and starred in a Super Bowl commercial celebrating artists’ creative hustle and spotlighting his process for transforming into his Black Panther character Erik Killmonger. Creators had the chance to win an apprenticeship at Jordan’s production company. In addition, Brisk hosted an event for Black Panther fans during the NBA All-Star weekend in Los Angeles, CA, on Feb. 16-17 with interactive Marvel-inspired installations. The pop-up event showcased the nine new Brisk labels created by emerging artists to kick off and promote the Creators Class program. The labels will debut on all Brisk packaging nationwide later this month.

Other highlights this weekend:

–On Saturday night, Jumanji : Welcome to the Jungle will become Sony’s second-highest movie of all-time at the domestic box office. We’ve been saying this for a while, but it’s really happening this weekend. The Jake Kasdan-directed movie sails by Sam Raimi’s Spider-Man 2 ($373.5M) and is now behind the director’s original Spider-Man movie ($403.7M).

–Also tonight, Fox’s The Greatest Showman, also in the same 9th weekend as Jumanji, will fly by Oscar-winner La La Land‘s $151.1M domestic total, the title responsible for reinvigorating the original musical on screen. There’s no such thing as coincidence, and both musicals featured music by the Oscar-winning songwriting team of Benj Pasek and Justin Paul.

–Lionsgate/Studio Canal/Aardman’s Early Man is coming in with a lowly estimated $4.7M over four-days, which is just not good for any movie. There’s simply too much family product in the marketplace, with Peter Rabbit, Jumanji and then you have Black Panther pulling in everybody. Lionsgate gets a distribution fee and is on the hook for P&A, with StudioCanal covering it. Early Man gets a B CinemaScore. Twenty percent of the audience was under 18, with 72% being over. The young set gave it a B+ and 74% bought tickets because it was an Aardman Animation title.

—China’s megahit Monster Hunt 2 ,which now owns the Middle Kingdom record for the best single day at the B.O. with $97M, is also in play stateside, with Lionsgate quietly distributing. Pic looks to make an estimated $529K over four days in 70 locations.

Industry estimates for the weekend of Feb. 16-19:

‘Spider-Man’ and other Sony films to hit Netflix after theaters