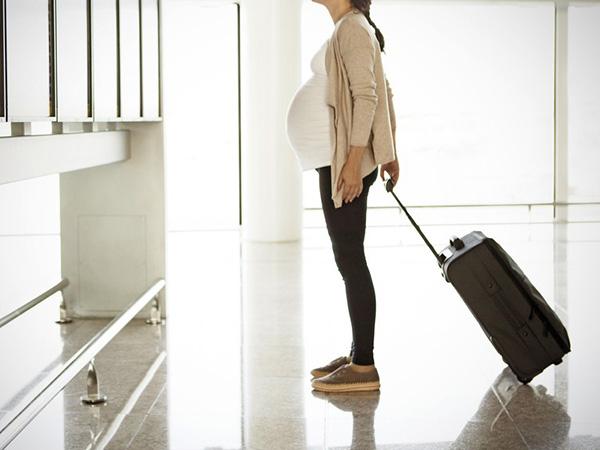 When you’re pregnant, you know certain activities are off-limits, like water-skiing and housing a wheel of unpasteurized cheese. What about boarding a flight, though? You’ve probably heard that flying after a certain point in pregnancy is absolutely verboten, and it’s true that many airlines have restrictions on when pregnant women can fly. But does that mean flying while pregnant is some incredibly dangerous act you should avoid? Here, experts discuss the facts.

American Airlines, for example, says that women who want to take domestic flights within four weeks of their due date need to have a doctor’s certificate to board. If you get even closer, like within seven days before or after your due date, you need to get cleared by a special assistance coordinator, which is someone who does things like send the requisite form to your doctor and help with mobility when getting on and off the plane, according to American Airlines. If you’re going on an international American Airlines flight or one that travels over water within four weeks of your due date, you’ll need to get cleared by a special assistance coordinator. You’ll also need a doctor’s note saying you’ve been examined within 48 hours of boarding and it’s safe for you to fly.

If you’re going to fly within seven days of your delivery date and are planning on using JetBlue, you’ll need a doctor’s note signed no more than 72 hours before departure that says you’re physically fit for air travel. It also needs to verify that your estimated date of delivery is after the latest date you’re booked for JetBlue travel.

United says on its website that a person who wants to fly at or after 36 weeks of pregnancy must have a certificate from an obstetrician dated within 72 hours before their flight is set to leave (along with two copies, too).

As you can see, airlines differ slightly in their requirements for flying while pregnant. On their website, United provides the following reasoning for these regulations: “to best assure the pregnant traveler’s safety.”

It’s clear they’re all most preoccupied with the later stages of pregnancy, which…actually makes a lot of sense.

It’s not that being on an airplane makes you more likely to give birth somehow. It’s mostly about avoiding you going into labor on the plane.

The main point of these restrictions is likely to lower the chances of you unexpectedly going into labor on a flight, Lauren Streicher, M.D., an associate professor of clinical obstetrics and gynecology at Northwestern University Feinberg School of Medicine, tells SELF. “[Airlines] don’t want to turn around midflight,” she says. (Or have to make an emergency landing, or make you give birth unassisted up in the sky—you get the picture.)

There’s nothing about cabin pressure or the experience of flying that is categorically likely to kick-start labor, Jessica Shepherd, M.D., a minimally invasive gynecologic surgeon at Baylor University Medical Center at Dallas, tells SELF. Labor is a complicated process that involves the release of hormones like oxytocin and hormone-like chemicals called prostaglandins, both of which cause uterine contractions. Flying in a plane isn’t automatically going to jump-start this process, but the problem is that due dates are estimates instead of guarantees.

“You really want to be as close to home as possible as you get close to your due date, just in case you go into labor early,” Christiani Guerrero-Gatto, a certified nurse-midwife at Massachusetts General Hospital, tells SELF. “You can go into labor at any time.”

But things happen, and sometimes flying near the end of your pregnancy just has to happen. In that situation, Guerrero-Gatto advises her patients to take their medical records with them. That way, if they happen to go into labor and can’t make it home to their doctor, they can clue another medical team into their needs quickly.

There’s another thing to consider, though: Your risk of developing a blood clot while pregnant will likely rise when you fly.

Being pregnant is a known risk factor for developing potentially dangerous blood clots called deep vein thrombosis (DVT). These clots typically start in the legs, where they can cause symptoms like pain, redness or discolored skin, and a feeling of warmth, according to the Mayo Clinic.

These clots can break off and travel to your lungs, where they can block blood flow, causing what’s known as a pulmonary embolism. Signs of this life-threatening condition include shortness of breath, chest pain or discomfort that gets worse when you inhale deeply or cough, lightheadedness, a rapid pulse, and coughing up blood, according to the Mayo Clinic.

There are a few reasons why you’re more likely to experience DVT when you’re pregnant. First, your levels of the hormone estrogen rise dramatically. Estrogen increases clotting factors in your blood, which can cause your blood to be more likely to clump together, Dr. Shepherd explains. Then there’s the fact that, according to the Mayo Clinic, the weight from the baby can put pressure on the veins in your pelvis, which can make it take longer for blood to return to your heart from your legs. This boosts the odds that it will clot together.

Flying is also a risk factor for developing blood clots, but it has more to do with the amount of time you’re sitting in the cabin than actually being up in the air. The Centers for Disease Control and Prevention (CDC) specifically warns about traveling for four hours or more. Blood clots can form in your legs when you travel for long periods because you’re probably sitting for the vast majority of that time—and the longer you sit still, the greater likelihood of forming a blood clot, Dr. Shepherd says.

This doesn’t mean you shouldn’t fly at any point in your pregnancy—you just need to be aware that you’re more likely to develop blood clots and take the right steps to lower your risk, Dr. Streicher says. For example, the CDC recommends that you move your legs frequently when you’re on long trips, take breaks from sitting to stretch your legs, and even do specific exercises, like extending your legs and flexing your ankles if you can. You probably don’t want to be doing a mini leg workout the entire time you’re on a flight, and you likely don’t need to. Instead, Guerrero-Gatto recommends getting up and walking for five minutes every hour if you can to increase blood circulation in your legs. Your doctor can give you specific recommendations based on your situation, like doing certain exercises and also wearing compression stockings, which help keep blood from pooling in your legs.

No matter how far along you are, if you’re concerned you should talk with your doctor and also be sure to bring up any other blood clot risk factors you may have, like a personal or family history of deep vein thrombosis.

Bottom line: If you’re far along in your pregnancy, it doesn’t hurt to check in with your doctor before you fly, even if an airline doesn’t mandate it.

Most women are totally fine to fly when they’re pregnant, but if you have a high-risk pregnancy, multiple blood clot risk factors, or a history of preterm deliveries, your doctor may advise that you avoid flying late in pregnancy if you can, Guerrero-Gatto says.

Even if you don’t fall into these categories but you’re thinking of going on a long flight, it’s smart to flag for your doctor that you’re planning to travel and see what they advise. “It really depends on your pregnancy and where you’re going,” Dr. Streicher says. “There’s a big difference between a local 40-minute flight and flying eight hours to Paris.”