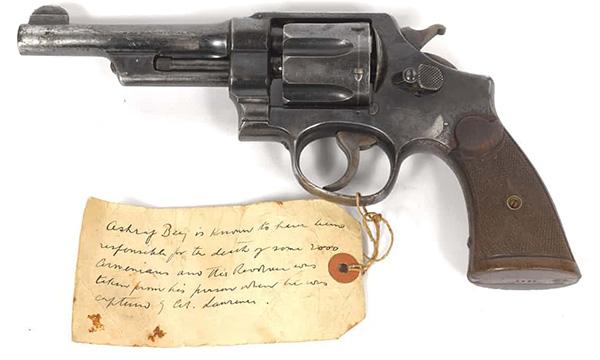 A revolver captured by Lawrence of Arabia from a Turkish officer during the first world war desert campaign which made him famous has been donated to the National Army Museum, together with a battered luggage label explaining its provenance.

TE Lawrence took the US-made Smith & Wesson from Ashraf Bey, whose name is inscribed in Arabic on the gun, when he was captured in 1916 together with more than £15,000 in gold, probably intended as bribes to persuade the Bedouin to support the Ottoman cause.

He later gave the gun to Capt Lionel Gray, a cipher officer in Middle East intelligence and an avid collector of souvenirs of the desert campaign, whose family have now donated it to the museum along with his archive.

The capture of Bey and his camel supply train was controversial because the Arab troops with Lawrence under Prince Feisal had diverted – and delayed in celebrating the captured loot – from a planned joint operation with the Royal Navy against the Ottoman-held city of Wejh.

The label, in Gray’s handwriting, explains the origin of the gun and adds: “Ashraf Bey is known to have been responsible for the death of some 2,000 Armenians and this revolver was taken from his person”.

Lawrence, who had interrogated Bey after his capture, passed on the information to Gray, implicating the Turkish officer the infamous massacre of Armenians in 1915, claiming that Bey had personally used the revolver to execute a number of captives.

The story of the incident and the campaign is told in a new book by Philip Walker, Behind the Lawrence Legend: the Forgotten Few who shaped the Arab Revolt, which drew extensively on Gray’s archive.