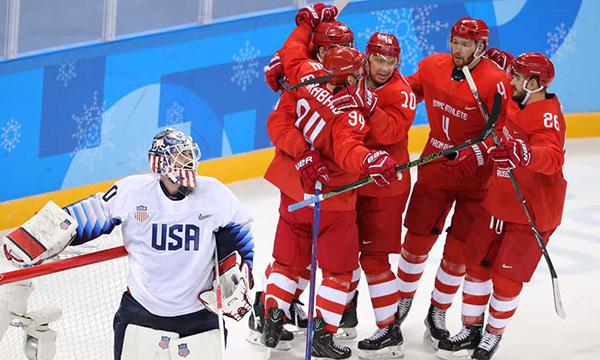 Ilya Kovalchuk scored two back-breaking goals as the Russians outplayed, outhit and outclassed the United States in a convincing 4-0 shutout on Saturday night as each team wrapped up pool play at the Olympics.

Saturday night lacked the tense political subtext of the Cold War from the famous ‘Miracle on Ice’ 1980 meeting and the pomp and circumstance of Russian president Vladimir Putin attending in Sochi in 2014, but it had the same kind of in-arena atmosphere. US and Russian fans filled Gangneung Hockey Centre and went back and forth with “U-S-A” and the “ROSS-I-YA” chants that made up the background noise at the Olympics four years ago.

There was at least one disagreement in the stands between those fans and plenty more on the ice. Pushing and shoving followed countless whistles, and at one point US forward Jordan Greenway and Prokhorkin got tangled up and came as close to a fight as players can without dropping the gloves.

With the loss, the United States are guaranteed to have to play in the qualification round on Tuesday. US goaltender Ryan Zapolski allowed four goals on 26 shots, including Kovalchuk’s goals less than 33 seconds apart at the end of the second period and start of the third. Los Angeles Kings 2012 draft pick Nikolai Prokhorkin scored the Russians’ first two goals in a dominant performance.

As close as the shots on goal were, the US rarely generated the quality scoring chances against Vasily Koshechkin the Russians did around Zapolski, who played all three preliminary-round games. Koshechkin stopped all 29 shots he faced for his first shutout of the tournament.

Many of the biggest stars in hockey are missing from the Games after the NHL refused to release players for the Olympics.