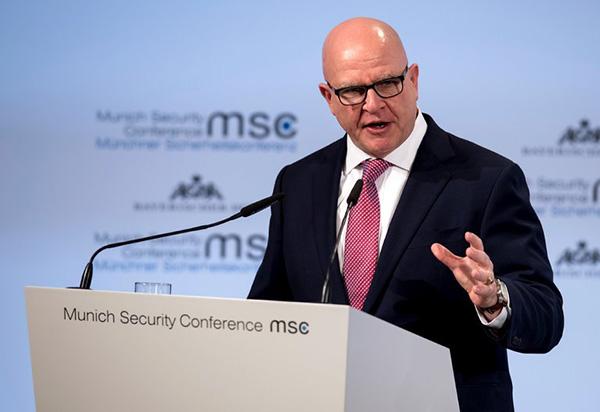 Donald Trump’s national security adviser, HR McMaster, said on Saturday that Russian meddling in the 2016 election is “incontrovertible” and “beyond dispute” in the wake of new US indictments.

The national security adviser made the remarks at the Munich Security Conference and spoke shortly after the Russian foreign minister, Sergey Lavrov, had dismissed the allegations as “just blabber”.

The 37-page indictment, returned on Friday by a grand jury in Washington, accused 13 Russians and three organizations of an elaborate, years-long plot designed, in part, to sway the US presidential election in favor of Trump. The indictments come as part of Mueller’s wider investigation into the ties between Trump campaign associates and Moscow.

“As you can see with the FBI indictment,” McMaster told an audience at security conference in Germany, “the evidence is now really incontrovertible and available in the public domain, whereas in the past it was difficult to attribute.”

McMaster spoke moments after Lavrov, appearing on the same stage in Munich, railed against what he called an “irrational myth” that Russia poses a global threat, “traces of which are found everywhere – from Brexit to the Catalan referendum”.

“Until we see the facts, everything else is just blabber – I’m sorry for this expression,” Lavrov said through an interpreter.

Sergey Kislyak, meanwhile, the former Russian ambassador to the US, said the allegations were part of a “hunting spree” at the conference on Saturday.

In a series of tweets on Saturday afternoon, Trump repeated his assertion that there was no collusion between his campaign and Russia, pointing to an opinion piece published in the New York Post, the president’s tabloid of choice, titled: “Russian indictments prove Trump won fair and square.”

He continued: “Funny how the Fake News Media doesn’t want to say that the Russian group was formed in 2014, long before my run for President. Maybe they knew I was going to run even though I didn’t know!”

The indictment provided powerful new evidence into the scope and sophistication of the Russian election-tampering campaign, which began in 2014 and cost millions of dollars, in an alleged conspiracy to undermine the US election system, according to prosecutors.

The document also provides extensive evidence of a sustained effort to disparage Hillary Clinton, the Democratic presidential nominee, by backing Trump and Bernie Sanders, who challenged her for the Democratic nomination.

The Russian nationals were accused of working with the Internet Research Agency, a St Petersburg-based “troll farm” to flood social media with pro-Trump content, including election-related hashtags such as “#TrumpTrain” “#Trump2016” “MAGA” and “Hillary4Prison”.

But the campaign went further, according to the indictment, which alleges that Russians agents traveled clandestinely to the US and “posed as US persons and contacted US social and political activists”. The extraordinary effort included organizing demonstrations and rallies in support of the former businessman.

What are the dangers for Trump from the Russia investigations?

In specific cases, prosecutors allege that Russian operatives promoted allegations of voter fraud by the Democratic party, echoing Trump’s claim during the campaign that he was the victim of a rigged political system.

The indictment also provides strong support for the conclusion reached by his intelligence agencies that Russia waged a disinformation campaign to help him win the election and to sow discord in the US political system.

Since his victory in November 2016, Trump has repeatedly cast doubt on the assessment, contending that the allegations of Russian interference a “hoax” perpetrated by Democrats and the Mueller investigation a “witch hunt”.

On Friday, Trump falsely claimed that the indictment proved just that.

Mueller alleged that Russian operatives “communicated with unwitting individuals associated with the Trump campaign”, but the indictment did not address the question of whether anyone on Trump’s team had knowingly colluded. He also stated that “the results of the election were not impacted”, a conclusion that has yet been independently established.

The White House press secretary, Sarah Sanders, followed Trump’s tweet with a statement that claimed “no collusion” in capital letters. She included a statement from Trump, which seized on the indictment to call for an end to the “outlandish partisan attacks, wild and false allegations, and far-fetched theories, which only serve to further the agendas of bad actors, like Russia, and do nothing to protect the principles of our institutions”.

“We must unite as Americans to protect the integrity of our democracy and our elections,” Trump said.

On Friday the US deputy attorney general, Rod Rosenstein, who is the top justice department official overseeing the Russia investigation, said in a carefully worded statement: “There is no allegation in this indictment that any American was a knowing participant in this illegal activity.” He also noted that there was no evidence presented in the indictment to suggest the disinformation campaign successfully “altered the outcome of the 2016 election”.

Reacting to the indictments on Friday, John Brennan, the former CIA director under Barack Obama, said Trump’s claim that the Russia investigation is a “hoax” was now “in tatters”. He added that he believed it was “implausible” that at least some American votes were not affected by the sustained Russian effort.

Meanwhile, the administration is facing mounting questions about how seriously it is heeding warnings that Russia plans to interfere again in the 2018 midterms, and what it is doing to safeguard the electoral system before then.

Earlier this week, the nation’s top intelligence chiefs, testifying before a Senate panel, warned that Russia is continuing to disrupt the US political system, targeting the upcoming 2018 midterm elections.