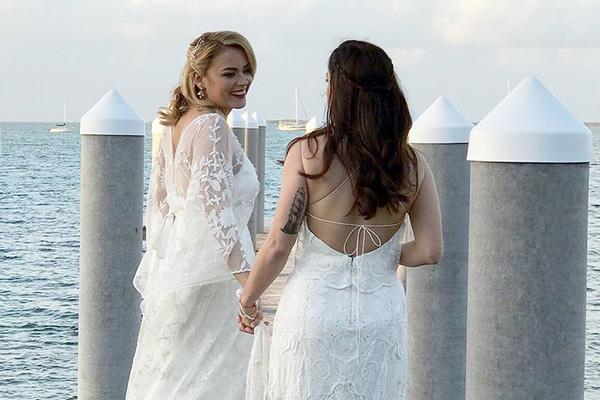 Parents at a Catholic school in Miami said they were astounded that administrators had fired a first-grade teacher just days after she married her girlfriend, and now some of the teacher’s supporters on the faculty are scared that the school will retaliate against them as well.

The teacher, Jocelyn Morffi, was by all accounts one of the most popular educators at Sts. Peter & Paul Catholic School in Miami, where she taught for nearly seven years.

“I consider her the Mother Teresa of teachers,” Samantha Mills, a parent whose son was in Ms. Morffi’s class last year, said on Monday.

But on Feb. 8, Ms. Mills and other parents at the school received an email from the principal saying that the school had made a “difficult and necessary decision,” and that Ms. Morffi would no longer be teaching at the school. The email was shared with The New York Times.

She was fired just days after marrying her girlfriend of about two years.

“The kids are very confused,” said Vanessa Almeida, whose children were tutored by Ms. Morffi. “My son said, ‘Mommy, I heard that Ms. Morffi got fired for getting married,’ and he looked at me and said, ‘What’s so bad about that?’”

On Feb. 9, Ms. Morffi spoke out in a statement on Instagram.

“This weekend I married the love of my life and unfortunately I was terminated from my job as a result,” she wrote in the post. “In their eyes I’m not the right kind of Catholic for my choice in partner.”

Mary Ross Agosta, director of communications for the Archdiocese of Miami, said in an email on Monday that Ms. Morffi was fired because she violated a contract stipulating that teachers must abide by Catholic teachings and traditions.

She declined to say whether Ms. Morffi had been fired for marrying a woman, noting that it was “a personnel issue.”

Four teachers attended the wedding, one of them told The Times on Wednesday. She asked not to be named out of fear for her career.

After Ms. Morffi was fired, the teacher said, they were called into a meeting with school officials. She said they were warned that if they wanted to continue working for the school, they could not post pictures or attend events that would be considered supportive of same-sex marriage.

The human resources representative at the meeting “didn’t straight out say you’ll be fired if you do, but that’s what she led us to believe,” the teacher said, adding that she was disappointed about how the situation was handled.

“We pick and choose what is considered wrong and what we’re going to enforce, and I think it’s like a joke,” she said.

The teachers were also asked to read a memo written in 2015 by Archbishop Thomas Wenski of Miami, after Florida’s ban on same-sex marriage was lifted.

The memo cited a statement from the Catholic Bishops of Florida that defined marriage as between a man and a woman, and said that if employees did not lead lives that were consistent with Catholic teachings it could lead to firing, even if the behavior in question occurs outside of work.

When asked about the meeting between teachers and school officials, Ms. Agosta, the archdiocese spokeswoman, said in an email on Wednesday that the details were “personnel-related and not for publication.”

Meanwhile, Ms. Almeida and other parents searched for the right way to explain to their children what had happened. In the end, she told hers that the school had made a mistake.

“Many of the parents are outraged,” Ms. Almeida added. Other teachers at the school were not upholding Catholic values, she said, and yet no action was taken against them.

“Do they investigate teachers to see who is using birth control?” she asked.

Ms. Morffi was an exemplary teacher, several parents said, and one friend described her as a faithful Catholic.

She encouraged students to distribute food throughout Miami’s poor neighborhoods through a nonprofit she created called Teach Hope. She volunteered as a basketball coach. And Ms. Mills recalled that every morning, as Ms. Morffi’s students filed into class, she played feel-good songs, like Bobby McFerrin’s “Don’t Worry, Be Happy.”

Ms. Morffi has since been replaced by someone Ms. Agosta described as a permanent substitute teacher who is “working on her certification.”

Ricardo Oviedo, whose daughter was in Ms. Morffi’s class, said he was examining whether the parents can take legal action. Other parents said they had considered starting a petition, holding a protest or contacting the State Legislature.

In Florida, the state civil rights law does not refer to sexual orientation. Certain counties in Florida, however, have established protections for gay workers, including Miami-Dade, where the school is, but that code does not apply to religious organizations.

Ms. Morffi declined to comment through her lawyer, Erica Cañas.

“Jocelyn is humbled by all the love and support she has received,” Ms. Cañas said in a written statement. “She feels that the manner of her firing was unfair, not only to her, but to her students as well. At this time, we are considering our legal options.”

Although Roman Catholic doctrine opposes same-sex marriage, many parishes have become more accepting of gay and lesbian parishioners in recent years, said the Rev. James Martin, a Jesuit priest and the author of “Building a Bridge,” a book about lesbian, gay, bisexual and transgender Catholics.

In December, the Rev. Gregory Greiten, a Roman Catholic priest in Wisconsin, wrote a column in The National Catholic Reporter, declaring: “I am gay.” He received a standing ovation when he told his parishioners. Also last year, the leader of the Archdiocese of Newark, Cardinal Joseph W. Tobin, offered a welcoming Mass for gay and lesbian Catholics and their families.

Still, according to New Ways Ministry, an advocacy organization for lesbian, gay, bisexual and transgender Catholics, at least 80 church employees have lost their paid and volunteer jobs in L.G.B.T. employment disputes since 2007.

Mr. Oviedo said that he and his wife — like many other parents at the Miami school — did not even know Ms. Morffi’s sexual orientation until the school fired her.

“It’s just incredible,” Mr. Oviedo said, “in this day and age in 2018 you can lose your job over who you choose to love.”