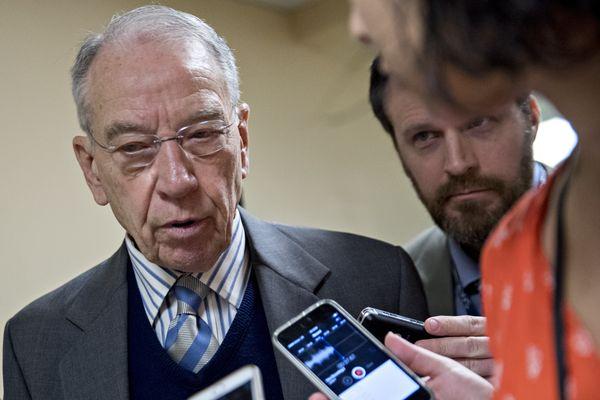 By Shannon Pettypiece and Mark Niquette

Trump spent much of his weekend tweeting about the investigation. Bloomberg’s Chelsea Mes reports.

President Donald Trump spent much of his weekend hammering the FBI, Democrats, Robert Mueller’s investigation and his own national security adviser over Russia’s efforts to sway the 2016 election that he won.

Trump’s 14 Twitter messages about the Russia investigation within 24 hours focused on defending the validity of his victory and insisting neither he nor his campaign colluded with the Russian misinformation effort. He wrote that “they are laughing their asses off in Moscow” over how much the meddling has been investigated.

There was no message to the Russians to cut out the interference described in Mueller’s indictments on Friday, or calling for action to combat it other than to say “get smart, America!” He suggested the FBI missed signals that may have prevented the deadly school shooting in Florida because it was expending too much effort on the Russia probe.

“This is not acceptable,” Trump tweeted, in the midst of a weekend at his Mar-a-Lago resort in Florida. “They are spending too much time trying to prove Russia collusion with the Trump campaign – there is no collusion. Get back to the basics and make us all proud!”

Trump’s tweets began less than a day after Mueller’s sweeping indictment of 13 Russians that detailed how they led social-media and grassroots efforts to attack Trump’s rival Hillary Clinton and fuel political divides in the U.S. The indictment sounded alarm bells about how easily U.S. voters could be influenced by foreign misinformation.

Trump previously questioned whether Russia was behind the efforts, something he repeated in another tweet Sunday referencing a comment during the 2016 campaign that others may be responsible. He also previously said he accepted Russian President Vladimir Putin’s denials of any election interference.

“I never said Russia did not meddle in the election, I said ‘it may be Russia, or China or another country or group, or it may be a 400 pound genius sitting in bed and playing with his computer,’” Trump said in the tweet. “The Russian ‘hoax’ was that the Trump campaign colluded with Russia — it never did!”

Trump also placed blame on Democrats. He said Sunday on Twitter that “Liddle’ Adam Schiff, the leakin’ monster of no control” and top Democrat on the House Intelligence Committee, is blaming former President Barack Obama for not doing more to stop Russian meddling. It was an apparent reference to a Feb. 16 interview in which Schiff said the Obama administration bears some responsibility “for not establishing a more forceful deterrent” to cyber attacks.

Democrats and even some Trump allies have called on him to come down harder on Russia, including by imposing sanctions.

“Why is President Trump failing to act to protect our democracy when there is indisputable proof now that Russia interfered in our 2016 elections?” Democratic Senator Chris Coons of Delaware said on CBS’s “Face the Nation” on Sunday.

Last week, top intelligence officials testified to Congress that Russians are targeting the 2018 elections with potential cyber attacks and efforts to sow political division.
Director of National Intelligence Dan Coats said no one had been clearly tasked with fending off ongoing interference. Those sentiments were echoed days later by National Security Advisor H.R. McMaster.

“The evidence is now really incontrovertible and available in the public domain, whereas in the past it was difficult to attribute,” McMaster said on Feb. 17. He called the Russian actions as described in the indictment a “sophisticated form of espionage.”

Trump responded by saying McMaster “forgot” to say that the results of the election weren’t changed by the Russian meddling — something the indictment didn’t address — and that the only collusion was between the Russians, Clinton and Democrats.

Republican Senator Chuck Grassley, who’s been critical of how the Russia probe was conducted, tweeted at the president Sunday to say “we can no longer say there is no Russian interference in our elections since Mueller indictments.”

Schiff said on ABC’s “This Week” on Sunday that while Obama’s response to the Russian meddling wasn’t sufficient, “none of that is an excuse for this president to sit on his hands.”