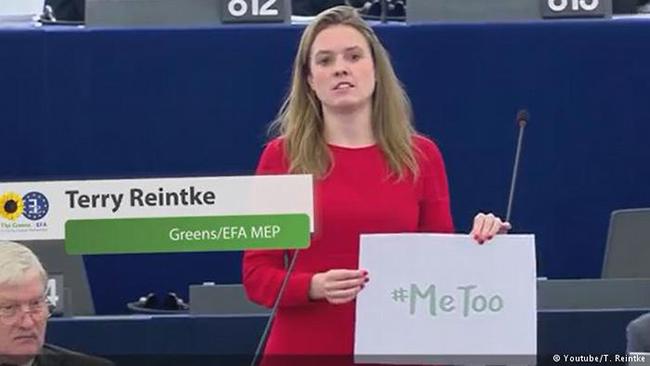 Sexual harassment scandals and the #MeToo movement in the US empowered women to reveal assaults in the European Parliament. Has it helped to create more accountability in the Brussels bubble? Teri Schultz reports.

One of German lawmaker Terry Reintke’s plans for marking International Women’s Day was to hand over a petition to European Parliament (EP) President Antonio Tajani that has been signed so far by more than 118,000 people calling for zero tolerance against harassment in the legislature, “be it structural, sexual, physical or psychological.”

Although Tajani had strongly condemned the situation and declared his support for reform, he declined Reintke’s request to accept the petition, saying he wouldn’t be in town.

Reintke had hoped last October was a turning point, when,in the face of numerous victims coming forward with tales of abuse, she and other parliamentarians stood up in a special session holding signs with the now iconic hashtag: “#MeToo.” “Me too,” Reintke said emotionally.”Me too. I have been sexually harassed just like millions of other women in the European Union and I think it’s about time that we clearly say that we should not be ashamed but the perpetrators should be ashaed.”

Reintke was additionally harassed in social media just for making her statement, with men writing in to tell her she should feel “lucky” for having been groped by anyone.

Among the petition’s demands are mandatory sexual-harassment training all the way up to the MEP level — currently it’s voluntarily and few lawmakers show up — and a complaint review committee made up of non-EP experts so victims don’t feel intimidated to come forward. At the moment, anyone filing a complaint has to defend it in front of colleagues, sparking fears of repercussions.

Speaking up is first step up

Reintke was disappointed in Tajani, but not discouraged. She’d already started a women’s support group called “Period” to offer a new forum for discussion, while #MeTooEU has become a platform for victims to get their sexual harassment complaints into the mainstream.

“Breaking the silence about this topic was a very important step to get something moving,” Reintke told DW. The EP has approved a new proposal calling for stronger action by the EU and national governments. Now Reintke wants the European Commission to propose new legislation to that effect. “We have been working hard behind the scenes” to achieve change, Reintke said. “I don’t mean [only in] the European Parliament but also in European legislation. So it’s still a battle that we’re fighting.”

Having more female decision-makers may help; in the EU institutions there’s a serious dearth. As the European Council’s gender equality adviser, Cristina Gallach tracks whether the council is living up to its legal requirements. Short answer: It’s not. And unfortunately, that’s par for the EU course. Overall the 28 member states together get a score of 6.6 out of 10 in gender equality, she said, with the Nordics up around 8/10 but “other states” around four.

Gallach pointed out that university graduates are predominantly female, but EU hires are mostly white men. “Women apply much less for management jobs than men,” she said, “but when they apply the rate of success is higher.” Gallach said she’s working on helping women with their self-confidence, tracing the problem all the way back to recruiting for EU appointment entrance exams. “They are already prepared and they just have to feel prepared to go for it,” she explained. While this is a “big big challenge,” she said, there’s also been progress. In the past two years about half of council appointments have been women.

Tanja Gohlert worked in the European Commission for six years and has plenty of stories about creepy incidents in the male-dominated workplace. But leaving EU institutions didn’t improve things, she said, as she suffered sexual harassment for seven years at her next job, despite her many complaints to superiors.

Gohlert went on to be a driving force behind the January 2017 “Lights4Rights” women’s march in Brussels, a sister event to the massive outpouring of antipathy that filled the streets of Washington, DCwith demonstrators after President Donald Trump’s inauguration. Working with the European Women’s Lobby, she also spearheaded a discreet delivery of pink knitted “pussy hats” to NATO leaders meeting in Brussels last May.

Thinking over the year since the last Women’s Day, Gohlert said her conversations with fellow activists have made her realize something shocking. “Every single woman I know has dealt with some sort of violence in her life, sexual violence or intimidation,” she told DW. “This is the status quo!”

Gohlert says she’s frustrated by people who seem to equate “feminism” with “burning our bras.” “It’s so much deeper and more nuanced than that,” she explained. “How do we get people to realize this has really become a deep part of our culture — and how to change that?”

Terry Reintke agrees that’s the mission, as she’s still hearing about sexual harassment in the EP, despite the new spotlight on it. “There are still people who think this was merely media hype and it’s going to go away and then things will go back to ‘normal,'” Reintke said. “And I really want to make sure that’s not how this is going to end up, that we will really make a step forward…to change the structures, [that] there will be consequences for perpetrators and support mechanisms for victims of sexual harassment.”